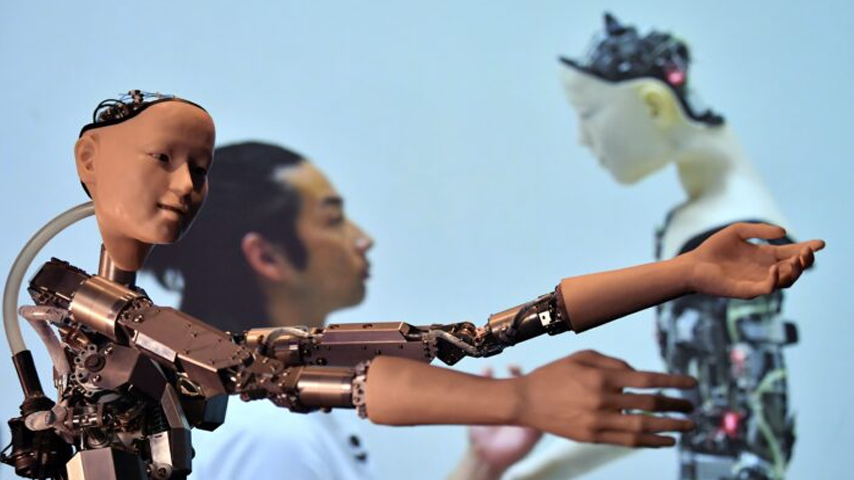 An AI robot with a humanistic face is pictured during a photocall to promote the forthcoming exhibition entitled “AI: More than Human”, at the Barbican Centre in London on May 15, 2019. (Ben Stansall/AFP via Getty Images)

Miller, who founded Gettr in July 2021 in response to censorship from incumbent social media services, said Meta’s endeavors to create a virtual world is an attempt by the tech giant to capture more of the youth audience that it is losing to other platforms.

Metaverse is reminiscent of the earlier online platform Second Life which allowed users to create avatars to live out a “second life” in a virtual world.

Zuckerberg’s Metaverse will attempt to build on this concept and integrate the individual’s experience more deeply while investing billions into the project. Recently, even the Embassy of Israel in Seoul opened a digital version of its mission on Metaverse.

However, there have been questions over the positive or negative impact of a wide-scale Metaverse engaging billions of people with some experts pointing to already prevalent problems such as online bullying and addiction—an “opium for the masses.”

“It seems to be a computerized extension of identity politics,” he told The Epoch Times. “‘Hey, I’m going to live online and have this different person or version of who I am. By the way, I can go and buy things when I’m online to make my online person cooler and different.’”

“It’s not real life, and I think there’s a certain point where you start getting into transhumanism and all kinds of weirdo stuff. It’s not that big of a leap,” he said.

Exposing the Underbelly of Humanity

Clinical psychiatrist Tanveer Ahmed said the platform could be “quite powerful” for people constrained in their regular lives by allowing them to build “extraordinary” lives online. At the same time, he said there were potential applications for treating attention-deficit/hyperactivity disorder (ADHD), post-traumatic stress disorder (PTSD), and exposure therapy to help individuals overcome fears.

“But some people, instead of having meaningful lives in the real world could get lost in this world because in some respects, they can hide who they really are and it becomes this outlet,” he told The Epoch Times. “So sometimes it becomes a way to avoid the real world, real relationships, and real problems, etc.”

“With Second Life when it became wide open it brought out the underbelly of human nature. People got on and started blowing stuff up or wanted virtual sex—it almost revealed this kind of underbelly.”

He also said there were ramifications for online addiction.

“It can magnify problems for people who are already a little vulnerable. If you already have paranoid illnesses like schizophrenia—it can really get magnified,” he added. “That’s a broader point about the internet and social media, it’s not really the main cause of psychological problems, but it can magnify people’s vulnerabilities.”

Meanwhile, Miller did not believe Meta was devoting billions in resources to change humanity but merely trying to innovate its way out of existing problems at Facebook.

“[Zuckerberg] knows that only two percent of kids under 18 are on Facebook, and he knows that it’s a dying platform,” he said. “That’s why he’s trying to merge it essentially with [Meta-owned] Instagram.”

“If you go on Facebook now, after you click a couple of times it is almost indistinguishable from Instagram. He’s almost started morphing them together,” he added.

Part of the problem is Facebook may have reached its saturation point with viable countries and audiences that it can expand into, while at the same time, users are opting for platforms with more dedicated offerings such as YouTube, TikTok, and Instagram.