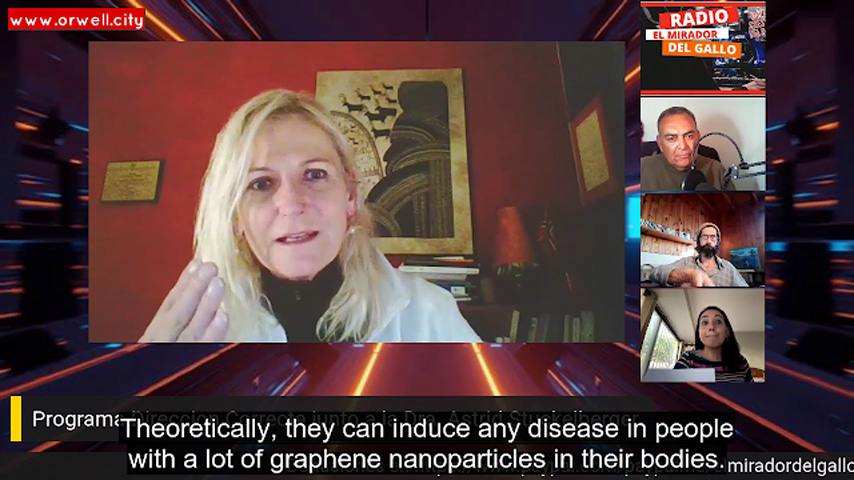 In an exclusive interview for El Mirador del Gallo radio station, Dr. Astrid Stuckelberger explained how a zombie pandemic scenario, just like any other pandemic scenario, could be created through graphene and the technology that goes into vaccines.

As she mentioned in a previous interview for World CONUVIVE, the technology that’s being injected into people is capable of receiving electromagnetic patterns and decoding them to cause any type of disease.

Jorge Osorio: In the previous interview, she talked about a zombie pandemic not being far off. Are we seeing one of the potential scenarios that we could live?

Dr. Astrid Stuckelberger: OK. Yes. The first fact to say is that the CDC (Center for Disease Control of the USA) has published, for the army and people, a document on the preparedness for the pandemic of zombies in November 2021. Preparedness. A preparedness for a zombie pandemic. This is a fact. And you can find the document if you type “PDF Preparedness plan for a pandemic of zombies.” This is a reality. Number one. So the plan is there. The plan is there.

Now, the second fact is in the patents and preparation for the zombies. You have to understand that every virus or every disease, let’s say… Ebola. Ebola is Marburg. Ebola, for example, is Marburg. There’s a code. Every virus, bacteria, and parasite has a code. An electromagnetic code. Because we’re bioelectric beings. We’re all electricity and water.

OK. So, when you know that graphene is a receptor of electromagnetic frequency and has other properties of superconductivity and energy stockage… It can take the energy. You know, this code can be sent to people. And they can induce disease. Theoretically, they can induce any disease in people with a lot of graphene nanoparticles in their bodies. But it can also induce behavior because we just saw this. We just explained. So this is very important because what they’re planning and predicting is, number one: Ebola. Ebola is a disease where people bleed. And it’s very impressive. So this is the first thing they’ll try.

The other thing they’re predicting is a zombie (pandemic). But, you know, in the Michael Jackson film “Thriller,” the zombies wake up from the cemetery, and they go and “na, na, na, na,” you know.

So now, the scoop. I was sitting with a coroner. You know, who takes care of dead people in the morgue. I was speaking to a lawyer who was working with the coroner in Belgium. And one of the preoccupations is that graphene has… Or anyway, there’s, with the experimental vaccine, an identity. There’s a Wi-Fi signal. There’s a Wi-Fi signal with graphene. And if you look with your phone, you can find the ID of people who got this experimental vaccine. So you have to have an old Samsung or… But you cannot see it on your iPhone. You can’t see that. So… And you can also find a Bluetooth app for iPhone or Samsung.

Dr. Astrid Stuckelberger: Yeah, Bluetooth scanner. There are some applications that you can download to see the Bluetooth identity of vaccinated people around you. So, now the scoop. It’s important to understand this possible zombie pandemic. This coroner of that body… So, when the dead body is in the hospital, in the room of the morgue, they change the blood because it’s… For reasons, I don’t know. They change the blood, so it doesn’t get… I think it deteriorates. So when they change the blood, they look if the person has the identity in the blood or in the body. And the ID is still giving a signal in the dead body. That’s number one.

So now the scoop is that they also went to the cemetery, where people are buried. And they saw… You can see… Even with people buried dead, you can see the identity. You can go and do the test in the cemetery. It means that Michael Jackson was a visionary because it’s possible with DARPA, with graphene… You know… Taking control of the behavior of the body from a distance.

End Times Prophecy: Destruction of America at the hands of Russia (Must Watch)