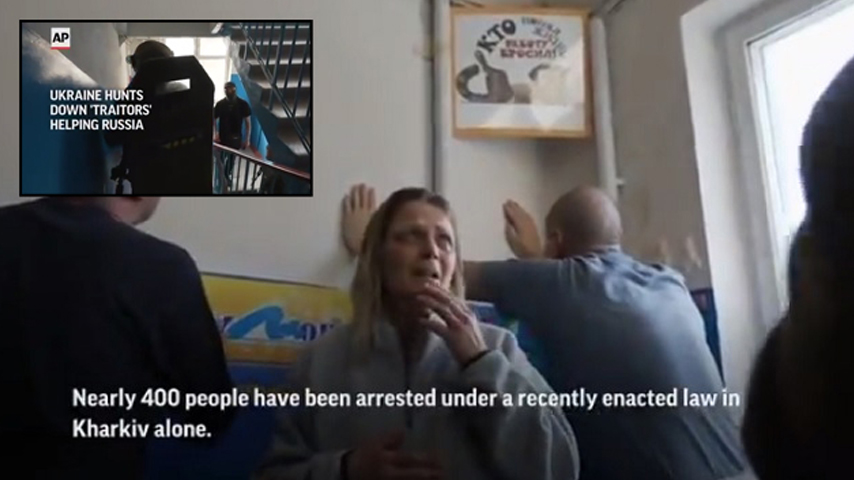 Associated Press journos embedded with Ukraine’s Security Service (SBU) as they went around “kidnapping” Ukrainians for speaking out against the Zelensky regime.

AP accompanies Zelensky's SBU thugs as they kidnap Ukrainians who speak out against the regime. This is an obvious propaganda piece designed to normalize crushing dissent. Imagine how they act when cameras aren't on. https://t.co/8YjRbQXDqT pic.twitter.com/o55SwvhvIH

Contrary to the AP's portrayal, the SBU tortures and murders its victims in an underground prison. I obtained testimony from 2 survivors – 1 of whom said he had burning hot needles stuck under his fingernails and a gun held to his head during interrogation https://t.co/h0zE2w5glX

The AP released a propaganda piece on Friday framing the kidnapping and torture of the Zelensky regime’s critics as a crackdown on “traitors”:

Ukraine cracks down on ‘traitors’

Viktor appeared nervous as masked Ukrainian security officers in full riot gear, camouflage and weapons pushed into his cluttered apartment in the northern city of Kharkiv. His hands trembled and he tried to cover his face.

The middle-aged man came to the attention of Ukraine’s Security Service, the SBU, after what authorities said were his social media posts praising Russian President Vladimir Putin for “fighting with the Nazis,” calling for regions to secede and labeling the national flag “a symbol of death.”

“Yes, I supported (the Russian invasion of Ukraine) a lot. I’m sorry. … I have already changed my mind,” said Viktor, his trembling voice showing clear signs of duress in the presence of the Ukrainian security officers.

“Get your things and get dressed,” an officer said before escorting him out of the apartment. The SBU did not reveal Viktor’s last name, citing their investigation.

Viktor was one of nearly 400 people in the Kharkiv region alone who have been detained under anti-collaboration laws enacted quickly by Ukraine’s parliament and signed by President Volodymyr Zelenskyy after Russia’s Feb. 24 invasion.

Offenders face up to 15 years in prison for collaborating with Russian forces, making public denials about Russian aggression or supporting Moscow. Anyone whose actions result in deaths could face life in prison.

“Accountability for collaboration is inevitable, and whether it will happen tomorrow or the day after tomorrow is another question,” Zelenskyy said. “The most important thing is that justice will be served inevitably.”

Although the Zelenskyy government has broad support, even among many Russian speakers, not all Ukrainians oppose the invasion. Support for Moscow is more common among some Russian-speaking residents of the Donbas, an industrial region in the east. An eight-year conflict there between Moscow-backed separatists and Ukrainian government forces had killed over 14,000 people even before this year’s invasion.

As a reminder, the AP said it was a conspiracy theory that Jan 6 suspects were tortured in jail.

.@DavidKlepper, how did this pass the quality check for fact checking at AP?

Jan 6 political prisoners aren’t being tortured in jail because they’re getting food and Zelensky’s SBU thugs aren’t rounding up their political opposition for torture and execution — they’re just cracking down on “traitors!”

Related: ‘They Are What They Are, They Were Defending Our Country’: Zelensky ‘Brushes Off’ Reports of Azov Battalion Committing Atrocities

Yes, You Will Also Get it! Harvard Epidemiologist Says Coronavirus Will Infect Most of the World by Next Year

EU explains why it continues to arm Ukraine