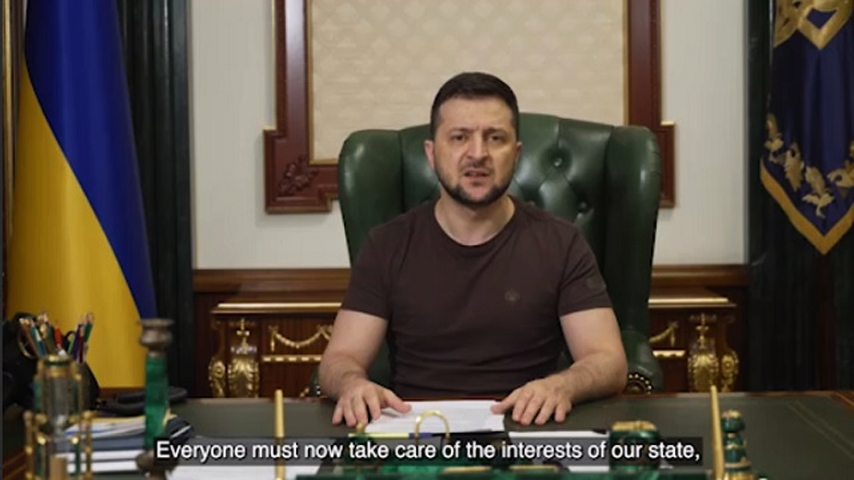 We’re hitting levels of “liberal democracy” never before thought possible! Remember what Schwab said ‘Great Reset’ is the merger of our physical, biological and digital identities. Ukraine is setting up the example that in case of emergency anything goes. Citing martial law Zelensky is now banning opposition, combining all news outlets and will implement digital IDs as well.

Zelensky just used his Martial Law powers to ban 11 political parties, including left-wing parties. But don't expect this to have any effect at all on US politicians pontificating that Ukraine represents the last stand of Freedom and Democracy pic.twitter.com/yyTphVFaWL

“It’s important that the country has a unified information policy” pic.twitter.com/IH0IlbOuo9

Ukraine’s President Zelenskyy has decided to ban the activities of 11 opposition parties, including some with alleged Russian links.

The largest of them is the Opposition Platform for Life, which has 44 out of 450 seats in the country’s parliament, largely from the Russian speaking eastern Ukraine. The party is led by Viktor Medvedchuk, who has friendly ties with Russian President Vladimir Putin, who is the godfather of Medvedchuks daughter.

President Zelenskyy spoke about this in a video address overnight Sunday, Ukrinform reports. Ukraine is currently under Martial Law since the Russian invasion, and these restrictions will stay till the Martial Law is in place.

In his address, President Zelenskyy said ,”I’d like to remind all politicians, from all camps: wartime exposes quite well the paucity of personal ambitions of those who try to put their own ambitions, their own party or career above the interests of the state, the people’s interests; those who hide in the rear, while pretending to be the only one who cares about defense.”

Further, he added, “Any activity on the part of politicians aimed at splitting (society – ed.) or collaborating (with the enemy – ed.) will not succeed. But they will face a tough response. That is why the National Security and Defense Council of Ukraine has decided that, given the full-scale war being waged by the Russian Federation and the ties that some political organizations have with that state, any activity of a number of political parties will be suspended pending martial law.”

From Mediaite, “Zelensky Merges All Ukrainian TV Outlets Into Singular Platform to ‘Tell the Truth About the War,’ Suspends Privately-Owned Media Companies”:

Ukrainian President Volodymyr Zelensky announced on Saturday that the country is combining all national TV stations into a singular platform in an effort to combat Russian disinformation.

The new platform, named “United News,” is a national security measure, given “the direct military aggression of the Russian Federation, the active dissemination of misinformation by the aggressor state, [and] distortion of information, as well as justifying or denying the armed aggression of the Russian Federation against Ukraine,” Zelensky’s office said in a statement (translation provided by Google Translate).

According to the release, United News will mainly consist of “information and/or information-analytical programs on a single information platform of strategic communication” and will be a “round-the-clock information marathon.”

The announcement, which came under martial law, means the suspension of privately owned and operated media outlets in Ukraine.

How will they liberalize next?!?!

NYPD Commissioner Bernie Kerik: “The Deep State Are Going To Try to ASSASSINATE Trump Before 2024”