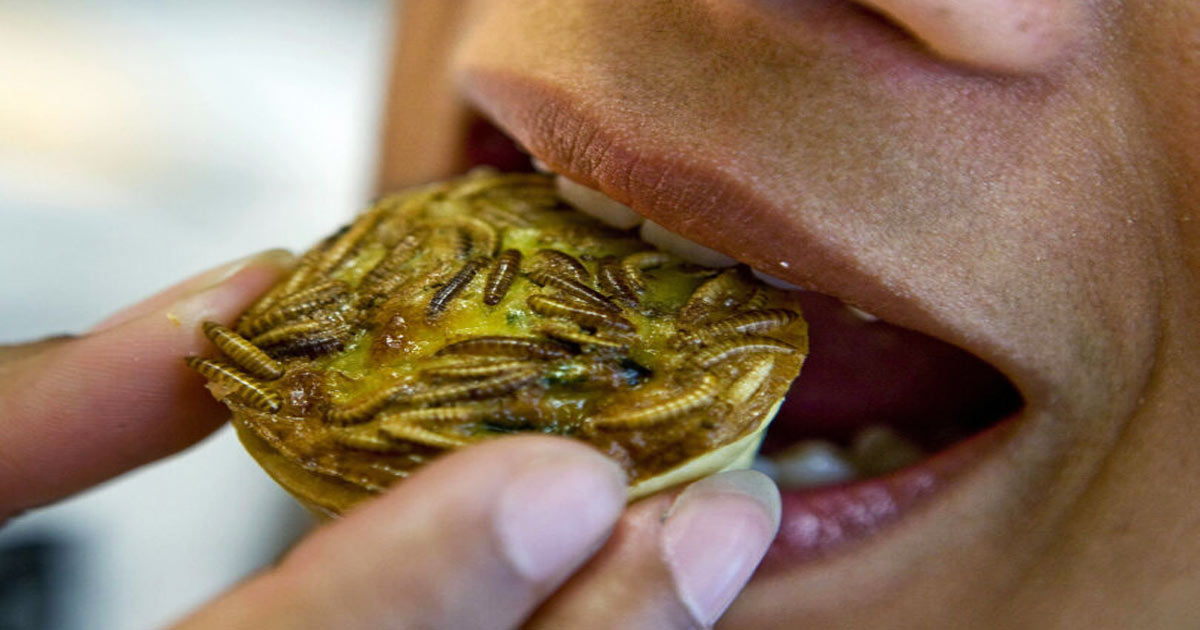 A woman takes a bite of a mealworm pie in the Hague, Netherlands. Image: Ed Oudenaarden/ AFP/ Getty Images

The World Economic Forum promoted the EU’s new plan to use mealworms in food in their bid to reduce meat consumption.

The globalists are pushing for the peasants to eat bugs, weeds, and synthetic ‘meat’ because bugs “consume fewer resources than traditional livestock.”

“Livestock around the world is responsible for around 14.5% of all greenhouse gas emissions relating to human activity. The need for land – whether for grazing animals or growing crops to feed animals – is “the single greatest driver of deforestation, with major consequences for biodiversity loss,” the paper says.

The European Union will be using mealworms, eaten whole, or in powder form in food.

“The European Union (EU) has ruled that the larval stage of the Tenebrio Molitor beetle, the mealworm, is safe for people to eat and it will shortly be on the market as a “novel food,” the WEF said. You Must Eat 100% Synthetic Beef, Says Bill Gates Who Is An Early Investor In The Fake Meat Industry (And Who Stands To Profit Massively)

Via the World Economic Forum:

As well as being a nutritious food source, insects consume fewer resources than traditional livestock. There are, of course, many parts of the world where insects are already part of everyday diets.

Industrializing their production and consumption could open up new routes to feeding the world’s growing population and alleviating some of the environmental pressures caused by conventional agriculture.

Ensuring access to safe, healthy sources of food is a key part of the UN’s Sustainable Development Goal (SDG) drive.

From zero hunger to climate action, from ending poverty to ensuring responsible use of resources, many of the 17 SDGs relate to the food people eat, how it is grown and how it is distributed.

According to the World Economic Forum’s Meat: The Future report, keeping up with the demand for animal-derived protein could put meeting the SDGs and Paris Climate Agreement targets in jeopardy.

Currently, China is the largest producer of meat, according to the WEF’s world data: