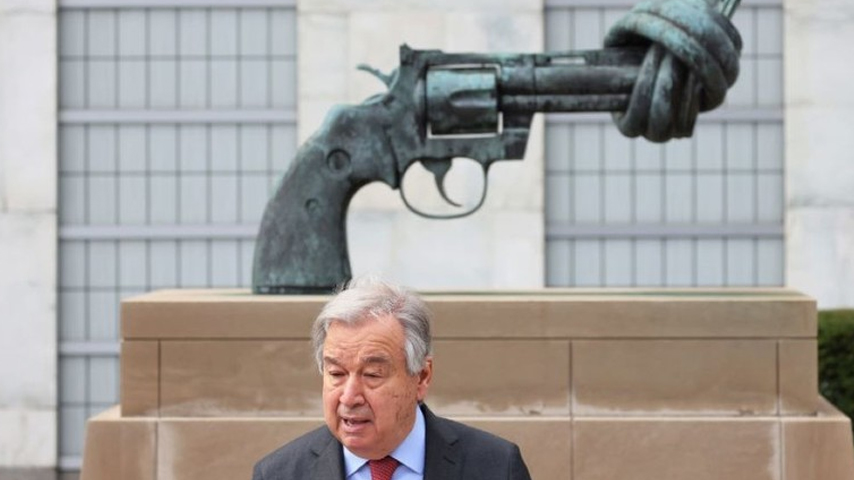 Rising geopolitical tensions around the world have put the global populace at its greatest risk of being wiped out by nuclear weapons since the Cold War ended, UN Secretary-General Antonio Guterres has warned.

“Today, humanity is just one misunderstanding, one miscalculation away from nuclear annihilation,” Guterres said on Monday at the Non-Proliferation Treaty (NPT) review conference in New York. He urged the world’s nations to “put humanity on a new path toward a world free of nuclear weapons.”

The UN chief claimed that conflicts around the globe, human rights violations, the climate crisis and the Covid-19 pandemic “have put our world under greater stress than it has faced in our lifetimes.” Risks of nuclear warfare are at the highest level since the height of the Cold War, he added.

“Humanity is in danger of forgetting the lessons forged in the terrifying fires of Hiroshima and Nagasaki,” Guterres said. “Geopolitical tensions are reaching new heights. Competition is trumping cooperation and collaboration. Mistrust has replaced dialogue, and disunity has replaced disarmament.”

The NPT should be strengthened to “make it fit for the worrying world around us,” the secretary-general said, citing the Russia-Ukraine conflict and tensions in the Middle East and on the Korean Peninsula. “Almost  13,000 nuclear weapons are now being held in arsenals around the world. All this at a time when the risks of proliferation are growing and guardrails to prevent escalation are weakening.”

The clouds that parted following the end of the Cold War are gathering once more. We have been extraordinarily lucky so far, but luck is not a strategy. Nor is it a shield from geopolitical tensions boiling over into nuclear conflict.

Guterres lamented that countries are seeking security by investing hundreds of billions of dollars to stockpile “doomsday weapons that have no place on our planet.” He argued that trying to reduce the risk of wars breaking out isn’t enough because “eliminating nuclear weapons is the only guarantee they will never be used.”

The UN chief said he would travel to Japan for the August 6 anniversary of the US nuclear bombing of Hiroshima, then make stops in other Asia-Pacific countries for talks with their leaders on non-proliferation.

The US, the only country ever to have deployed a nuclear bomb in war, reportedly spent $44.2 billion on such weaponry in 2021, exceeding the $38.2 billion spent by the eight other nuclear-armed nations combined. China ranked second in nuclear spending, at $11.7 billion, while Russia was number three at $8.6 billion.

“For more than 50 years, the NPT has made our world safer and more prosperous, and the treaty is never more important than in times of crisis,” US Secretary of State Antony Blinken said on Monday. “The United States stands ready to work with all our partners to ensure a safer world for everyone.”

A Russian Victory in Ukraine Won’t End the War