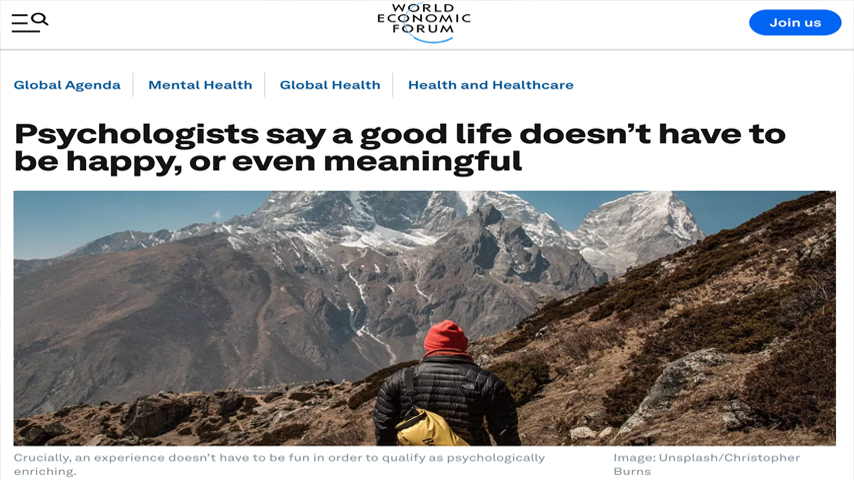 You’ll own nothing, and you’ll live a “psychologically rich life.”

This story is about dirty playing, the attempt of the World Economic Forum to cancel happiness, and (as a relevant side story) “vaccines” as a philosophical concept.

The thing about tricksters is that they inevitably try to trick you. They play dirty. They promise you the sun and the moon to get you excited, then deliver a cockroach by the name of “The Sun and the Moon,” and then look you straight in the eye and say that they’ve delivered.

Remember how they promised us that “we’ll be happy”? Yeah, the other part of the promise was owning nothing, but they said that at least, we’ll be happy. Remember “happy”?

The new buzzword is “psychologically rich,” which can be experienced during adversity.

To make it brutally simple, what they are advertising now is “living in interesting times” and accepting it with pleasure. There is so much S&M to their entire arrangement!

”It’s going to suck,” they are hinting. “You won’t have the things you are used to having, you’ll travel less, you won’t see your friends as much—but hey, your life will be psychologically rich—and you’ll love it. If you don’t love it, you’ll still have to live it anyway, so you probably want to just love it.”

It’s kind of like advertising the virtue of turning the other cheek to the person you are slapping—which begs many questions.

Plus, this new angle offers infinite possibilities for a lucrative business, such as selling us “psychologically rich” “experiences” in their beloved Metaverse (while in real life, we are half-dead, in front of our computer and alone)—or using “psychological richness” as a formal mental health metric that they can measure and then use to sell or mandate us various “improvements,” etc.

And what makes it even worse is that they are basing their story on something that is real—except they are playing dirty, and they are no gurus.

The real part is that yes, people can learn from challenges. Overcoming challenges has spiritual significance. But—we are talking overcoming it, doing all you can to overcome it and arrive at goodness—not just getting stuck in a bad circumstance and thinking it’s normal.

And secondly, the World Economic Forum is not qualified to touch anything spiritual, they are rotten.

To further illustrate the insidious nature of their proposition, I want to talk about “vaccines” in a philosophical sense.

”Vaccine” as a philosophical concept

In order for the “vaccine” to be useful, it has to be designed by a wise pedagogue and scientist in the true sense of it, be it a pedagogue of the human spirit or a pedagogue of the immune system. The designer has to have a thorough understanding of the area of the challenge, as well as honesty, humility, spiritual respect, and a great grasp of the scientific method. If those prerequisites aren’t met, it’s a cause for trouble.

For example, some older cultures had rites of passage. The purpose was to ensure that before a child becomes an adult, he goes through a number of challenges (some very intense, some life-threatening) that are designed to lead to an acquisition by that child of a range of practical skills and spiritual experiences, necessary for functioning as a fulfilled and useful adult in the community while being aware of one’s unique gifts and relationships.

The job of creating and supervising those challenges was done by very wise and responsible elders who knew what they were doing and respected the spirit. There were no cutting corners.

However, if somebody else tries to use that logic and design potentially life-threatening experiences while being clueless and/or dishonest, the consequences are tragic. (You might remember James Arthur Ray and his fake sweat lodges).

In addition to that, many times in history, dishonest thieves advertised the challenges and the suffering that they were creating for other people as soul-purifying.

(“You’ll own nothing and you’ll be happy” … sorry “psychologically rich” is in that tradition).

And taking it back to the World Economic Forum, I am sincerely waiting for them to further expand the formal definition of a “vaccine” and define the “interesting times” that they are creating for the peasants as a psychological “vaccine” to make us stronger, under their supervision.