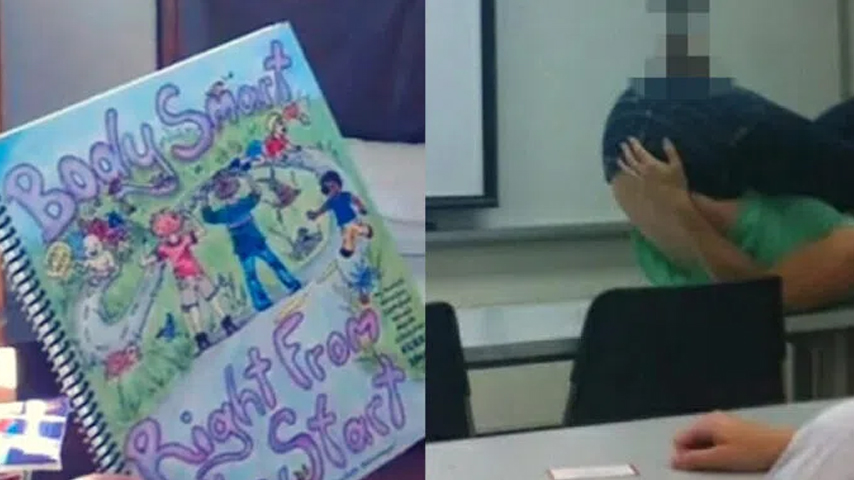 The worksheet, highlighted by a concerned parent on Facebook, asks students to “Draw a picture of the private places where you can touch your penis or vulva if you want to.”

“Some children like to touch their own private body parts and some children don’t,” the worksheet states, going on to ask children which places in their home would be considered private.

Infowars.com reports: One parent complained on Facebook after their four-year-old was given the assignment.

“#1 I was not informed this would be discussed no info came home beforehand # my daughter is JUNIOR KINDERGARTEN!” [sic] they wrote.

“If your 4-year-old child came home with this as homework how would you feel cause I personally lost my shit it wrecked my day and gave me a disgusting feeling.”

The incident took place at the T’lisa̱lagi’lakw School in Alert Bay, British Columbia, a First Nations territory, where school officials said they were investigating the assignment.

The assignment is derived from a workbook titled, “Body Smart: Right from the Start,” described as a book for parents to teach their children about body safety.

According to online activist Libs of TikTok, the author of the “Body Smart” workbook, Kerry Isham, defended the worksheet from angry parents in Facebook comments.

The author of the book where the worksheet was taken from is defending it in the comments. pic.twitter.com/5yozJTJQH3

The parent who complained on Facebook later posted an update reporting school officials were unaware the teacher had introduced the worksheet to children and confirmed the incident is under investigation.