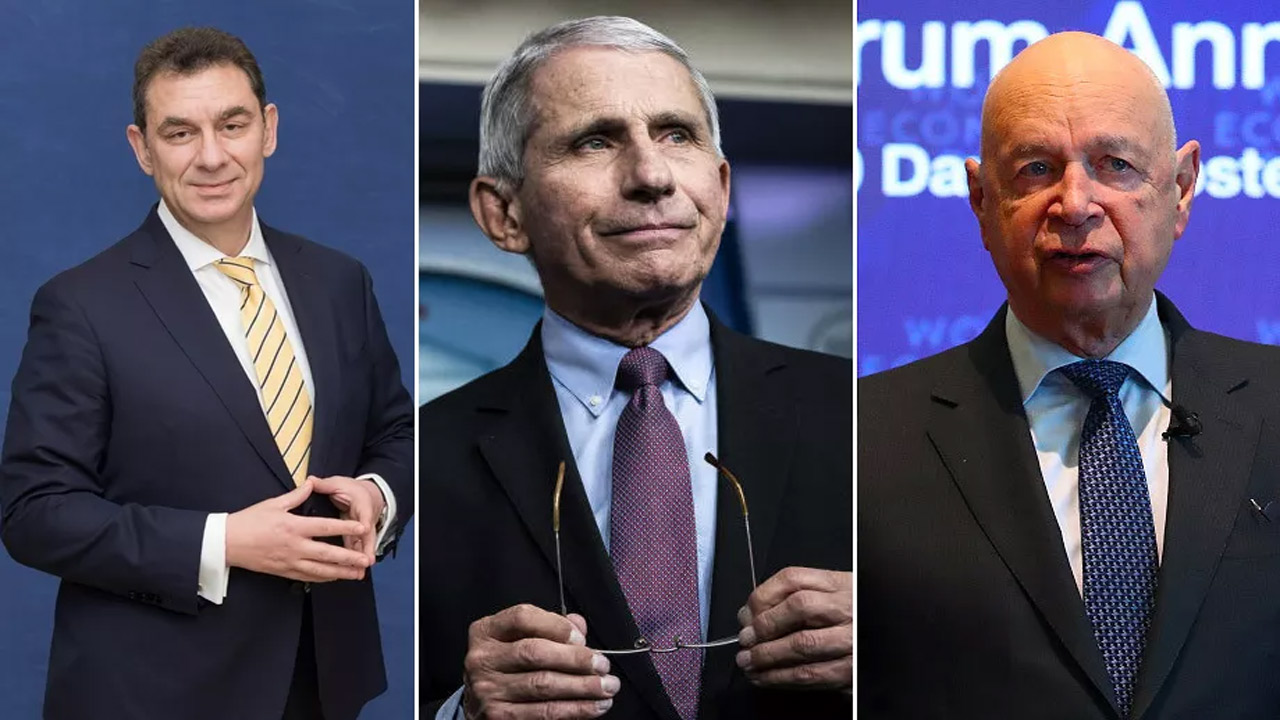 According to The Desert Review, a slew of high-power figures in the COVID-19 pandemic and the push to mandate experimental COVID jabs have been accused of several crimes, including crimes against humanity, war crimes and crimes of aggression in the U.K.

“In a stunning 46-page legal filing to the International Criminal Court, an intrepid attorney and seven applicants accused Anthony Fauci, Peter Daszak, Melinda Gates, William Gates III, and twelve others of numerous violations of the Nuremberg Code. These included various crimes against humanity and war crimes as defined by the Rome Statutes, Articles 6, 7, 8, 15, 21, and 53.”

In all, the 16 defendants named in the legal filing are:

9. Tedros Adhanhom Ghebreyesus, director-general of the WHO

The victims, on behalf of whom the complaint was filed, are “the peoples of the United Kingdom”. One of the seven applicants is Dr. Michael Yeadon, a former vice president and chief scientist of allergy and respiratory research at Pfizer.

At the end of 2020, he expressed deep concerns about the COVID jabs becoming mandatory, as he could find no medical rationale for their use. In 2021, as we all know, mandates were rolled out around the world. In April 2021, Yeadon went public with concerns that the shots were part of a depopulation agenda.

“I believe [COVID-19 booster shots] are going to be used to damage your health and possibly kill you. I can see no sensible interpretation other than a serious attempt at mass depopulation.”

What Is the International Criminal Court?

The International Criminal Court (ICC) is an intergovernmental organization and international tribunal located in The Hague, Netherlands. Its activities are governed by an international treaty called the Rome Statute, which has been ratified by more than 120 countries, including the U.S.

The ICC is a permanent, independent court that investigates crimes that concern the international community, such as claims of genocide, war crimes, crimes against humanity and crimes of aggression. In theory, member states are supposed to cooperate with the court, but that doesn’t always happen.

If warranted, the court can prosecute and try individuals charged with these types of crimes, but it will typically only do so if the member state fails to take the appropriate legal actions against the perpetrator, which can happen if a government tries to shield the individual in question from criminal responsibility. As noted in the complaint:

“We have tried to raise this case through the local English police and the English Court system without success, we have been unable to even get the case registered either with the police or with the court after several attempts.

The statute for the ICC declares that ‘The ICC is intended to complement, not to replace, national criminal systems; it prosecutes cases only when a State is unwilling or unable genuinely to carry out the investigation or prosecution (Article 17(1)(a)). This is such a case which is why we are addressing the ICC directly.”

Still, the ICC relies on the states’ national law enforcement to arrest individuals, so a member state can still restrict the court’s ability to bring a criminal to justice. The ICC does not have its own police force to carry out warrants or arrests. In this case, defendants are scattered across several countries. According to the ICC complaint, the 16 defendants have violated the Nuremberg Code and four articles of the Rome Statute.

The Nuremberg Code is a set of medical research ethics principles that grew out of the “Doctors Trial” in Nuremberg following World War II. The war crimes tribunal at Nuremberg established 10 standards to which doctors must conform when performing experiments on human subjects.

Foremost among these codes of ethics is the necessity of informed consent to participate in medical experimentation. The Nuremberg Code has also been the basis for other medical ethics guidance and laws, including the Helsinki Declaration of 1965, which binds practicing physicians to “act in the patient’s best interest when providing medical care.”

Article 6 of the Rome Statute refers to acts of genocide, i.e., acts intended to destroy, in whole or in part, a national, ethnical, racial or religious group. Here, the group in question is the British population in its entirety, and by extension the world, starting with the elderly, chronically ill and disabled. Genocide can include the acts of:

– Deliberately inflicting conditions of life, calculated to bring about whole or partial destruction

All of these definitions apply in this case, and details are provided to support each charge. For example, with regard to “conditions of life calculated to bring about destruction,” this includes both the destruction of businesses and transfer of wealth through imposed lockdowns and damaging people’s immune systems through the refusal to offer early treatment, mask mandates and coercing people to take the COVID jab.

Article 7 of the Rome Statute covers crimes against humanity, which includes:

The specific charges under each are detailed in the complaint, with data to support them.

War crimes are covered in Article 8 of the Rome Statute. The complaint argues that “a covert war has been waged against the people of the United Kingdom (and the world) through the release of the biological weapon SARS-Cov-2 and the additional bioweapon, m-RNA gene therapy ‘vaccines”. They also include a charge of Mens Rea, meaning the intent to commit a crime, stating that:

“… the members of the UK government and world international leaders against which we have brought this complaint, are knowingly working on behalf of this global agenda for depopulation through the biological weapons known as SARS-Cov-2 and the m-RNA ‘vaccines.’

We submit therefore that the members of the UK government and world leaders against which we have brought this complaint have both knowledge and intent with respect to these alleged crimes.”

War crimes listed in the complaint include:

The last violation is crimes of aggression against the British population, covered under Article 8 bis3 of the Rome Statute. According to the complaint:

“This is a global criminal conspiracy, which has been planned for several decades. It is now obvious that ‘the plan’ involves the ultrarich and leaders of most nation states, with a few exceptions.

The goal of this activity is to create a new world order, through the UN ‘s Agenda 2030, by dismantling all the Democratic Nation States, step by step, controlled by an un-elected elite and to destroy the freedoms and basic human rights of the peoples of the Earth.

In addition to this, the aim is to destroy small and medium sized businesses, moving the market shares to the largest corporations, owned by the Global Elite. The fulfilment of this goal will most likely lead to full enslavement of mankind.

This is being done by means of the threat from both a dangerous biological weapon, the virus, the vaccines, the testing test pins, the mask mandates and all other measures. All of which constitute not only a breach of National laws, but also a fundamental breach of the Charter of the United Nations and the Treaty of Rome and our Fundamental Human rights.

It is of the utmost urgency that ICC take immediate action, taking all of this into account, to stop the rollout of COVID vaccinations, introduction of unlawful vaccination passports and all other types of illegal warfare mentioned herein currently being waged against the people of the United Kingdom by way of a court injunction.”

In a January 1st video announcement (featured at the bottom of this article), Dr. Reiner Fuellmich — a U.S.-German consumer protection trial lawyer and co-founder of the German Corona Extra-Parliamentary Inquiry Committee launched July 10th, 2020 — announced the data they now have in their possession is “enough to dismantle the entire vaccine industry.”

Fuellmich is heading up the committee’s corona crisis tort case. Initially, the committee focused on exposing the PCR test fraud, but now they also have evidence that the vaccine makers were using different lot numbers to carry out an experiment within an experiment, unbeknownst to the public.

According to Fuellmich, it looks like an experiment to determine the dosage needed to kill and/or maim people. In other words, people have not been getting identical products. Different lots or batches contain different dosages and even different ingredients.

“There is inescapable evidence, in my view as a lawyer, of there being premeditation.”

According to Dr. Wolfgang Wodarg, former chair of the Parliamentary Assembly of the Council of Europe Health Committee, they have “hard evidence” of this. He points to an investigation published in late 2021 showing only 5% of the lots were responsible for 100% of the rapid deaths.

In the video, Wodarg also shows a graph of 9,500 different Pfizer jab batches, with some having toxicity, as evidenced by deaths, that is 3,000 times above the baseline. Others have toxicity that is 2,500 times higher than baseline. Between them are batches with no deaths attributed to them.

Wodarg also claims to have data showing that the vaccine makers appear to have coordinated and synchronized their experimentation so that only one of them is releasing a potentially deadly batch at a time. But they’re all doing this. They’re all experimenting with dosages and ingredients, Wodarg insists, and the reason they’re able to do this is because there are no review boards overseeing any of them.

Without a doubt, the legal battles will be incredibly difficult to pursue, as there are so many powerful people working together on this, protecting each other. But that doesn’t mean we don’t try. On the contrary, we must do everything in our power to bring the criminals behind this global takeover to justice, and hold them accountable for everything that has been done to our economies, our livelihoods, our families, our health and our children’s futures.

Dr. Bryan Ardis Believes Pope Francis Is Behind Covid and the Jabs