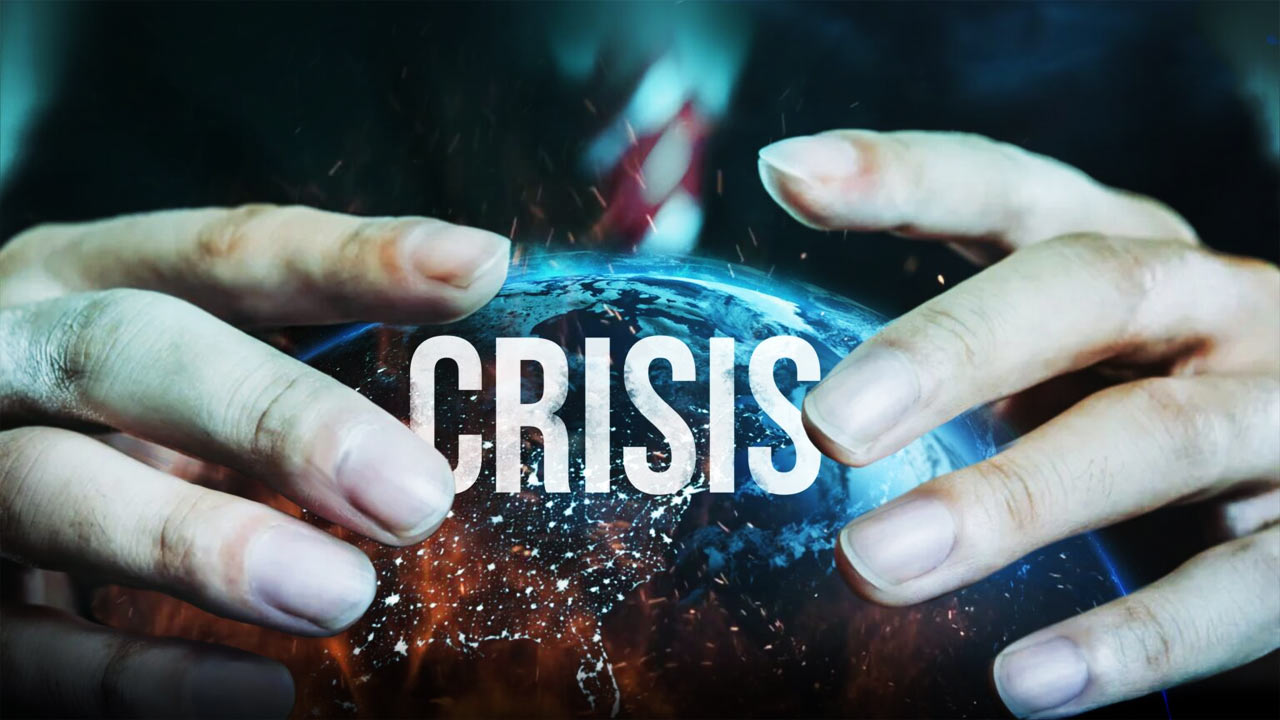 I believe it’s God’s way of warning us; He’s telling us, and the world, that the day of His wrath is rapidly approaching.

Why do I say that? It’s because I believe the Lord is providing foretastes of this coming time of great judgment upon the earth so His saints understand that their time of departure is ever so close, and those outside of Christ are warned that their remaining time on earth is short.

In addition, God is demonstrating that His prophecies concerning the future of this world will happen precisely as predicted. We already see multiple signs of a world headed for the conditions described in Revelation chapters 6 and 13.

2 Thessalonians 2:9-10 recently caught my attention in this regard, particularly the [reference to] wicked deception.

2 Thessalonians 2:9-10 KJV – “Even him, whose coming is after the working of Satan with all power and signs and lying wonders, And with all deceivableness of unrighteousness in them that perish; because they received not the love of the truth, that they might be saved.”

Although these verses speak to what will happen after the Rapture, such evil deceit already abounds throughout our world. It warns those paying attention that a much greater time of deception lies ahead as this “lawless one” steps onto the world scene. The “wicked deception” that’s already here will grow and someday illuminate the unveiling of the antichrist.

What follows are some of the more prominent lies that continue to gain traction today and thereby signal the lateness of the day in which we live.

The Elite Seek Our Wellbeing

The biggest obstacle that keeps people, even many believers, from recognizing the lateness of the time in which we live is that so many of them attribute benevolent motives to those pushing for new world order. The suggestion that COVID-19 resulted from the careful planning of the elite more often than not results in scoffing along with charges of being a conspiracy theorist.

How dare anyone think that something that has caused so much suffering and death was intentional and planned in advance?

The evidence, however, confirms that not only did the globalists purposefully release this virus, but they made it more contagious and more deadly before doing so.

In my posts on transhumanism, I provide considerable evidence for the evil motivations behind the release of the virus. In Transhumanism and the Nearness of the Tribulation, I reference an October 2019 film clip where Dr. Fauci and others at the NIH discuss the need for a worldwide virus, perhaps from China, that will enable them to implement their vaccine, apparently already far along in development, right away rather than go through a decade of testing to verify its safety and effectiveness.

Pope Francis, Klaus Schwab at the World Economic Forum, and other globalists paint an idyllic picture of the future they have planned for us. It’s one where everyone is happy because the government takes care of all their needs.

However, their stated goal is to enslave all humanity under a Marxist tyranny where they not only monitor, but control the behavior of everyone on the planet. Their plans eerily track with the words of Revelation 13:16-18 and now, they have both the technology and the means to make it happen.

We Must Fear COVID-19 And Its New Variant, Omicron

The news media, working in sync with the globalists, created a climate of fear across the world when the coronavirus first appeared on the scene and continue to do all they can to keep people masked and afraid. The elite perpetuate evil lies in order to keep the public hooked on their vaccines and future booster shots through which they make billions of dollars.

This past summer, Moderna CEO Stéphane Bancel, jumped into the list of billionaires with a net worth of over 4 billion dollars. Moderna itself is forecast to have revenues exceeding $13 billion in 2021, not bad for a company’s very first marketed product.

If people could sue Moderna for the deaths, permanent disabilities, and severe heart conditions caused by its vaccine, both Moderna and its CEO would both be bankrupt today rather than floating in a sea of money beyond what most can imagine.

The deceitful hype is already underway in regard to the new variant, Omicron. Despite several reports stating that its symptoms are mild, President Biden has already prohibited travel from South Africa, where it first appeared, and Israel recently banned tourism because of it.

An article on Omicron on the World Economic Forum (WEF) website displays the deceit behind the hype regarding this variant. Notice the ominous wording of the paragraph under the heading, “Why are scientists so concerned about Omicron?”

The decision to classify Omicron as a variant of concern was based on the evidence presented to the WHO’s Technical Advisory Group on Virus Evolution. This evidence suggested the new variant has several mutations that could impact how easily it spreads, the severity of illness it may cause and, crucially, the effectiveness of existing COVID-19 vaccines.[i]

The article goes on to list many potential dangers regarding Omicron, but always with the caveat that “more research” is needed or that “it will likely take weeks to determine if Omicron causes more severe illness among the general population.”[ii] In other words, they have no idea how this new variant will affect people, but meanwhile they feel compelled to warn us of dire consequences. It’s called “wicked deception” by any other name.

The World Health Organization (WHO) is also doing its part to generate widespread fear over this new variant, Omicron, that so far has exhibited the mildest of symptoms described as aching muscles, tiredness, and perhaps a cough that lasts a couple of days.

Consider the following wording from a Newsmax article regarding the WHO response:

The heavily mutated Omicron coronavirus variant is likely to spread internationally and poses a very high risk of infection surges that could have “severe consequences” in some places, the World Health Organization (WHO) said on Monday. [my emphasis]

No Omicron-linked deaths had yet been reported, though further research was needed to assess its potential to resist vaccines and immunity induced by previous infections, it added.[iii]

Do you recognize the “wicked deception” in these warnings? Even with mild symptoms and no solid data to go on, the elite are already preparing us for the day when they will use Omicron as an excuse for more vaccines and boosters. It also sounds as though it will become the rationale for vaccinating people with natural immunity to COVID-19.

People Need The COVID-19 Injections In Order To Be Safe

What’s the motive behind the fraudulent warnings regarding the Omicron variant? It’s to get more people vaccinated. It furthers the purposes of globalists to keep people in a perpetual panicked frenzy and thereby motivated them to get the latest vaccines and boosters.

And, despite unsubstantiated fears that this variant will render current vaccines ineffective (hint: they already are), the elite maintains the lie that these injections are not only necessary but “safe and effective.”

The number of deaths due to the COVID-19 injections will soon reach the twenty thousand mark according to the numbers reported to the U.S. CDC. The number of those permanently disabled in America because of these shots is well over thirty-one thousand with hospitalizations very close to the one hundred thousand mark.

The CDC has received a total of 927,738 reports of adverse reactions to the COVID-19 injections (through November 26, 2021). Typically, at most ten percent of the actual adverse responses to any vaccine are reported to the CDC. These injections are anything but “safe and effective.”

If You Do What We Say, Life Will Return To Normal

Another great lie that’s prevalent today is this: if everyone receives the COVID-19 injections, life will return to normal. The initial response from President Biden to Omicron mimicked this exact sentiment. He said, “if everyone gets vaccinated, there will be no need for more lockdowns.” (Note: the first person in the U.S. diagnosed with Omicron was fully vaccinated.)

One member of the Biden administration recently said that the supply chain crisis would end if everyone received a vaccination, although the connection between the two is not at all clear.

Apart from a dramatic change of leadership in many governments around the world and among most giant worldwide corporations, life will not return to normal. Without radical changes across the planet in regard to the virus and vaccine mandates, the world will continue its rapid path to the sudden destruction of the day of the Lord (1 Thessalonians 5:1-3).

I say this despite the growing opposition to vaccine mandates around the world. Millions of people in many countries are taking to the streets to protest these mandates being enforced by their governments. In America, tens of millions, at least, say they will never accept the jabs regardless of the consequences. I know of Christians as well as non-Christians who take such a stand.

Despite the growing resistance to vaccine mandates, the “wicked deception” of our day will intensify until the time of the antichrist’s unveiling to the world.

I believe several factors will later overcome the current uprisings across the world and resistance in America:

I cannot say for sure that the Lord is coming for us this month or even next year, but I believe His appearing is quite close. Could it even happen before Christmas? Yes, but we may very well ring in the new year still looking for Jesus’ appearing.

While we cannot know the day or the hour of Jesus’ imminent return, what we see reminds us of our need to continue relaxing our grasp on the things of this world and to watch as never before for our departure to the place that our Savior is preparing for us.