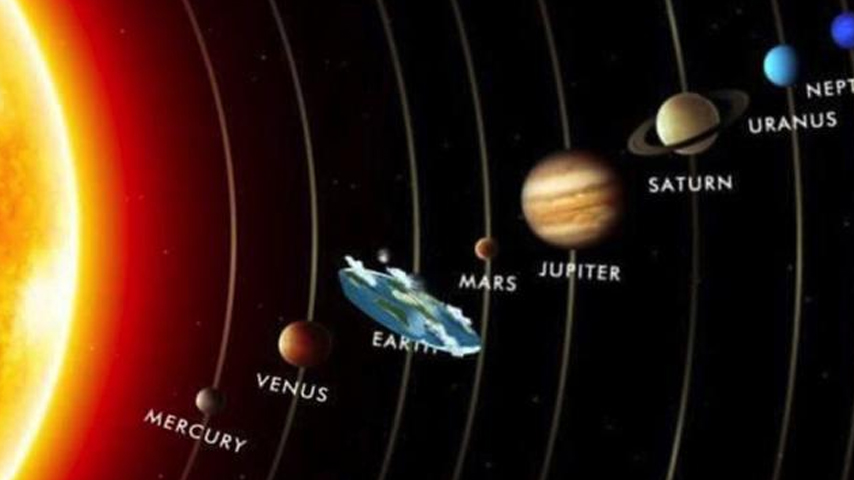 Another common question posed by Globe Earthers is, “if the Earth is flat, then why are all the other planets round?” To begin with, the Earth is a plane, not a planet, and by simply adding a “t” on the end modern astronomers have linguistically transformed our Earth plane into a globe spun around the Sun. The word “round” is also deceiving, because most Flat Earthers would agree that the Earth is round like a coin, just not round like a ball. When making this argument online, Globe Earthers will often present a picture of the traditional heliocentric model with eight spherical planets and a Flat Earth among them floating in space. This entire concept is a strawman, however, as no Flat Earthers believe in a flat planet floating in space third from the Sun in a heliocentric solar system.

In NASA’s many CGI depictions the planets do indeed appear spherical, but when looking at them for yourself through a telescope or super-zoom camera, it is certainly contestable whether or not the planets are spherical. Every time I have personally observed the planets they look like small, relatively flat, round lights and nothing like huge spherical terra firma worlds. Only in NASA and other “official” space agency footage do the planets appear like three-dimensional globular worlds; in amateur footage they look more like two-dimensional lights, similar to all the other stars. In fact, before they were called “planets,” the ancients referred to them as “wandering stars” because they only differed from the other “fixed stars” in their relative motions. They each have their own unique appearance, but none of them look like spherical worlds, even Saturn which appears more like a circular luminary with a halo of light around it.

Ultimately, however, it is completely irrelevant what shape the other planets are when looking to prove the shape of the Earth. Modern astronomers constantly repeat this red herring that I have dubbed the “appeal to the sky” fallacy. Imagine inviting a contractor over to your house to measure the dimensions of your floor and instead they immediately get out their tape-measure and start measuring all the recessed lights in the ceiling! This is exactly what Globe Earthers are doing by claiming to provide scientific proof for the shape of the Earth under our feet by looking at lights in the sky over our head. Like magicians distracting you with one hand while fooling you with the other, globe apologists when asked for empirical, measurable proof of the shape of the Earth beneath their feet, invariably inevitably instead turn their noses up to the sky and start talking about the shape of things up there. But even if all the other planets really were spheres, what on Earth does that have to do with the shape of the Earth?

Aleister Crowley 666: The Essence of Evil