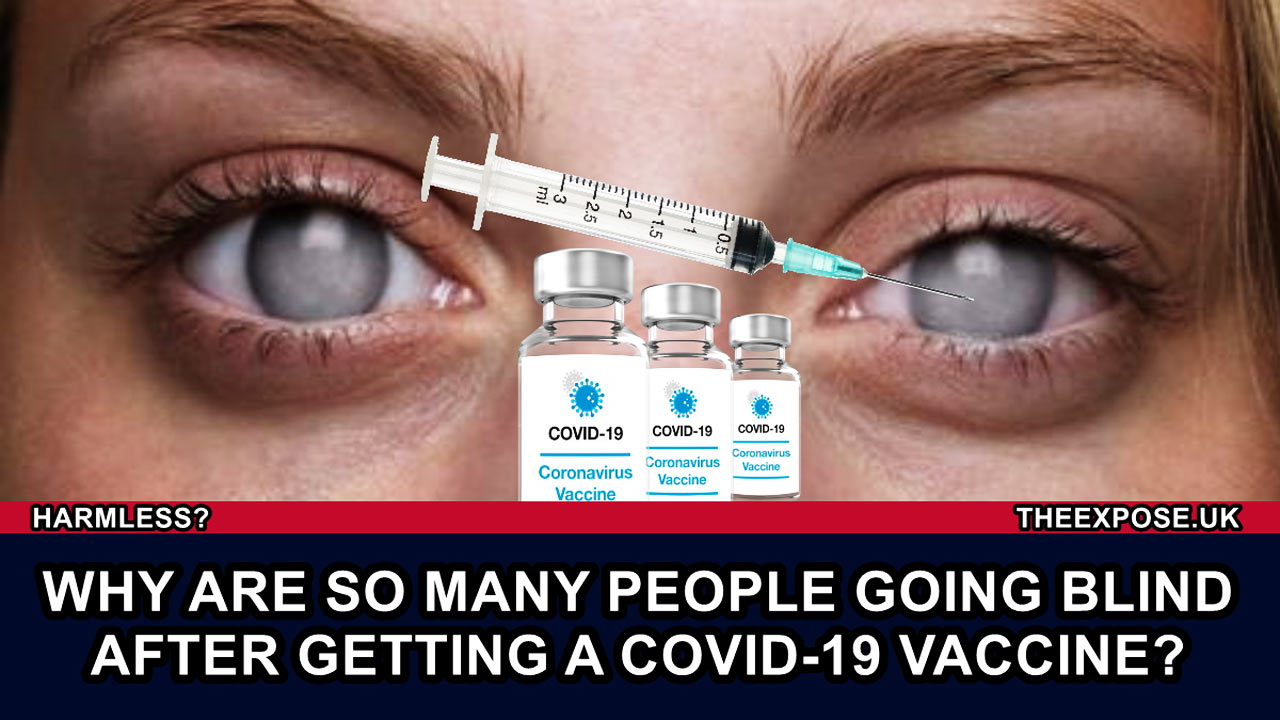 Since the first Covid-19 vaccine was authorized for use in the United Kingdom and administered on the 8th December 2020, there have been hundreds of thousands of adverse reactions reported to the MHRA Yellow Card scheme. But there is one particular adverse reaction which is both concerning and strange, and the number of people suffering from it is increasing by the week – Blindness.

Fifteen people have also reported an adverse reaction known as ‘blindness transient’ due to the Pfizer vaccine. This is where a person suffers visual disturbance or loss of sight in one eye for seconds or minutes at a time. And a further six people have reported an adverse reaction known as ‘unilateral blindness’. This is where a person is blind or has extremely poor vision in one eye.

In total there have been 6,682 eye disorders reported as adverse reactions to the Pfizer jab as of 8th Dec 21.

As of 8th Dec 21, the MHRA has received 19 reports of blindness, and 34 reports of visual impairment as adverse reactions to the Moderna injection.

In all, when including adverse reactions reported where the brand of the vaccine was not specified, there have been 22,060 eye disorders reported as adverse reactions to the Covid-19 injections, with 461 of these reactions being complete blindness. Now, “fact-checkers” alongside authorities have been on the case to sweep this data under the carpet and have labeled it as unreliable. Their reasoning is that “just because someone reports the event after having the vaccine, it doesn’t necessarily mean it is due to the vaccine”.

But what they’re not telling you is that it also doesn’t necessarily mean it is not due to the vaccine, and we imagine every single person who has reported an adverse reaction would disagree with the fact-checkers and authorities’ attempts to play down these reports.

For instance, one person who goes by the name of Louis has been documenting the story of his wife on Twitter since she had the AstraZeneca Covid vaccine.

Unfortunately, his wife went completely blind in her left eye and 30-60% blind in her right eye after having the AstraZeneca jab and the neurologist treating her categorically told her not to have the second dose.

As you can see the misery which the fact-checkers are disregarding as “not necessarily the fault of the vaccine” is very real for the people who are reporting them. But why are the Covid vaccines causing people to go blind?

Well, there is another extremely concerning adverse reaction that has been reported to the MHRA Yellow Card scheme, one which has seen an astronomical increase in the number of reports in the past few weeks – stroke.

Sadly these 652 reported strokes have resulted in 47 deaths.

Unfortunately, the AstraZeneca vaccine has also caused hundreds of strokes. Up to 8th Dec 21, the MHRA has received 2,193 reports of stroke as adverse reactions to the jab resulting in 154 deaths. The 2,193 strokes include 180 cerebral hemorrhages, 114 subarachnoid hemorrhages (supposed to be rare), 156 ischaemic strokes, and a shocking 1,275 cerebrovascular accidents.

But what does this have to do with people going blind? Well, this helpful fact sheet provided by the Stroke Foundation in Australia provides the answer as to why. According to the fact sheet around, one-third of stroke survivors suffer visual loss, and most sadly never fully recover their vision.

The reason strokes cause blindness is that vision depends on a healthy eye to receive information and a healthy brain to process that information. The nerves in the eye travel from the eye through the brain to the occipital cortex at the back of the brain, allowing you to see.

Most strokes affect one side of the brain. Nerves from each eye travel together in the brain, so both eyes are affected. If the right side of your brain is damaged, the left side vision in each eye may be affected. It is rare for both sides of the brain to be affected by stroke. When it does happen, it can result in blindness.

So if you’ve been wondering how on earth the experimental Covid vaccines could cause a person to go blind, you now know why. It’s the vast amount of strokes the Covid injections are causing that are contributing to this devastating and life-changing adverse event. Strokes will not be the only contributing factor of course, but the numbers suggest they are most likely the main adverse reaction at fault.

With a national campaign to administer the third jab to millions of Brits within the space of a few weeks, we dread to think how many more people will have to suffer the life-debilitating condition of blindness due to an experimental injection that does not work and makes the recipient worse according to the UK Governments own data.

Genetic Harm to Newborn Females are Easy to Verify