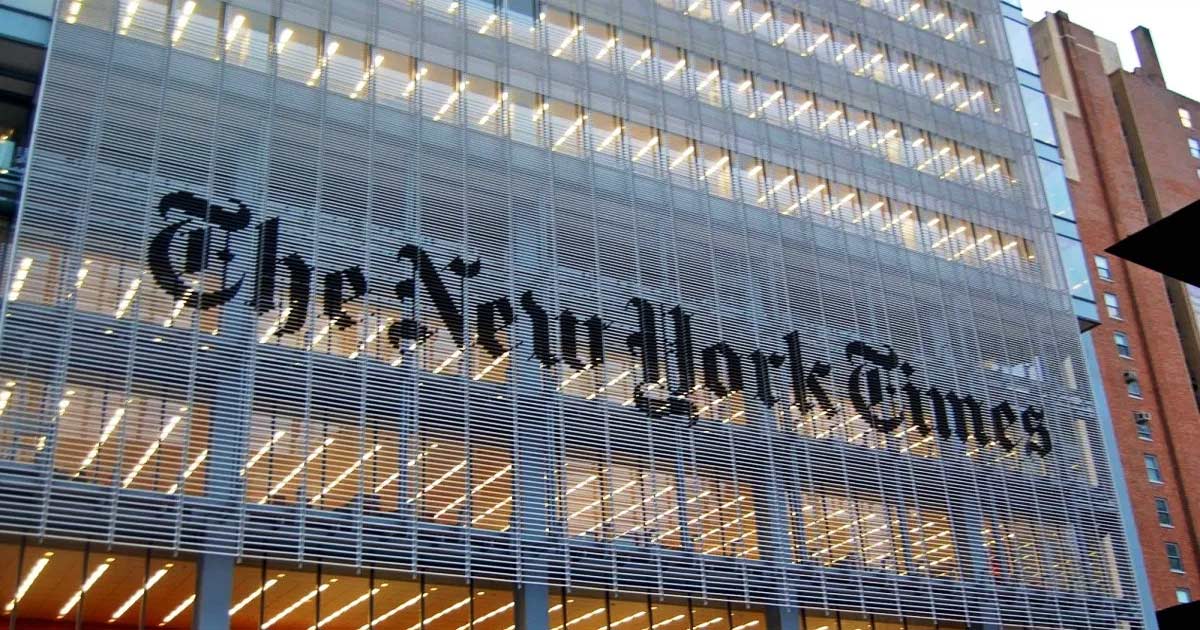 The New York Times published an astonishingly horrible article the other day titled “Latin America Is Facing a ‘Decline of Democracy’ Under the Pandemic” accusing governments like Venezuela and Nicaragua of exploiting Covid-19 to quash opposition and oppress democracy.

The article sources its jarringly propagandistic claims in multiple US government-funded narrative management operations like the Wilson Center and the National Endowment for Democracy-sponsored Freedom House, the extensively plutocrat-funded Carnegie Endowment for International Peace, and the United States Naval Academy.

The crown jewel of this piece of State Department stenography reads as follows:

“Adding to these challenges, democracy in Latin America has also lost a champion in the United States, which had played an important role in promoting democracy after the end of the Cold War by financing good governance programs and calling out authoritarian abuses.”

I wanted to laugh but it isn't funny that the New York Times thinks it's okay to publish such a blatantly false statement. pic.twitter.com/cBlcf4aq1l

The fact that America’s most widely regarded newspaper feels perfectly comfortable making such a spectacularly in-your-face lie on behalf of the US government tells you everything you need to know about what the mass media in America really are and what they do.

The United States has never at any time been a champion of democracy in Latin America, before or since the Cold War. It has intervened hundreds of times in the continent’s affairs throughout history with everything from murderous corporate colonialism to deadly CIA regime change operations to overt military invasions. It is currently trying to orchestrate a coup in Venezuela after failing to stage one during the Bush administration, it’s pushing regime change in Nicaragua, and The New York Times itself admitted this year that it was wrong to promote the false US government narrative of electoral shenanigans in Bolivia’s presidential race last year, a narrative which facilitated a bloody fascist coup.

This is propaganda. There is no other word for it. And yet the only time western politicians and news reporters use that word is to talk about nations like Russia and China.

Why is propaganda used in an ostensibly free democracy with an ostensibly free media? Why are its news media outlets so consistently in alignment with every foreign policy objective of US government agencies no matter how destructive and inexcusable? If the media and the government are two separate institutions, why do they so consistently function as though they are not separate?

Well, that’s easy. It’s because they aren’t separate. The only thing keeping this from being seen is the fact that America’s real government isn’t located where people think it is.


In a corporatist system of government, where no hard lines are drawn between corporate/financial power and state power, corporate media is state media. Since bribery is legal in the US political system in the form of corporate lobbying and campaign donations, America’s elected government is controlled by wealthy elites who have money to burn and who benefit from maintaining a specific status quo arrangement.

The fact that this same plutocratic class also owns America’s media, which is now so consolidated that it’s almost entirely run by just six corporations, means that the people who run the government also run the media. This allows America’s true rulers to set up a system which promotes narratives that are favorable to their desired status quo.

Which means that the US has state propaganda. They just don’t call it that themselves.

Strip away the phony two-handed sock puppet show of US electoral politics and look at how power actually moves in that country, and you just see one more tyrannical regime which propagandizes its citizens, brutally cracks down on protesters, deliberately keeps its populace impoverished so they don’t get powerful enough to change things, and attacks any nation which dares to disobey its dictates.

This is Newsweek not Infowars (although Infowars had story first) An ex president visiting the private island of a known pedophile who was running a human trafficking operation with the daughter of a spy. Just think about that the next time you ridicule conspiracy theorists. https://t.co/VDs1wpvide

Plutocrats not only exert control over America’s media and politics, they also form alliances with the secretive government agencies whose operators remain amid the comings and goings of the official elected government. We see examples of this in the way new money tech plutocrats like Jeff Bezos, Peter Thiel and Pierre Omidyar have direct relationships with the CIA and its proxies.

We also see it in the sexual blackmail operation which was facilitated by the late Jeffrey Epstein in connection with billionaire Leslie Wexner and Israeli intelligence, along with potentially the FBI and/or other US intelligence agencies. Today the internet is abuzz as newly unsealed court documents relating to Epstein and his co-conspirator Ghislaine Maxwell reveal witness testimony regarding underage sex trafficking, with such high-profile names appearing in the documents as Alan Dershowitz, Bill Clinton, and Prince Andrew.

The Overton window of acceptable political discourse has been shrunk into such a narrow spectrum of debate that talking about even well-known and extensively documented facts involving the real nature of America’s government and media will get you laughingly dismissed as a conspiracy theorist, which is itself a symptom of tight narrative control by a ruling class which much prefers Americans thinking they live in a free democracy whose government they control with their votes.


In the old days you used to be able to tell who your rulers were because they’d sit on thrones and wear golden crowns and make you bow before them. Human consciousness eventually evolved beyond the acceptability of such brazen indignities, so it became necessary for rulers to take on more of a background role while the citizenry clap and cheer for the illusory puppet show of electoral politics.

But the kings are still among us, just as cruel and tyrannical as ever. They’ve just figured out how to mask their tyranny behind the facade of freedom.

But 2020 has been a year of revelations, a trend which seems likely to continue accelerating. Truth cannot stay hidden forever.

Why The WHO Faked A Pandemic?