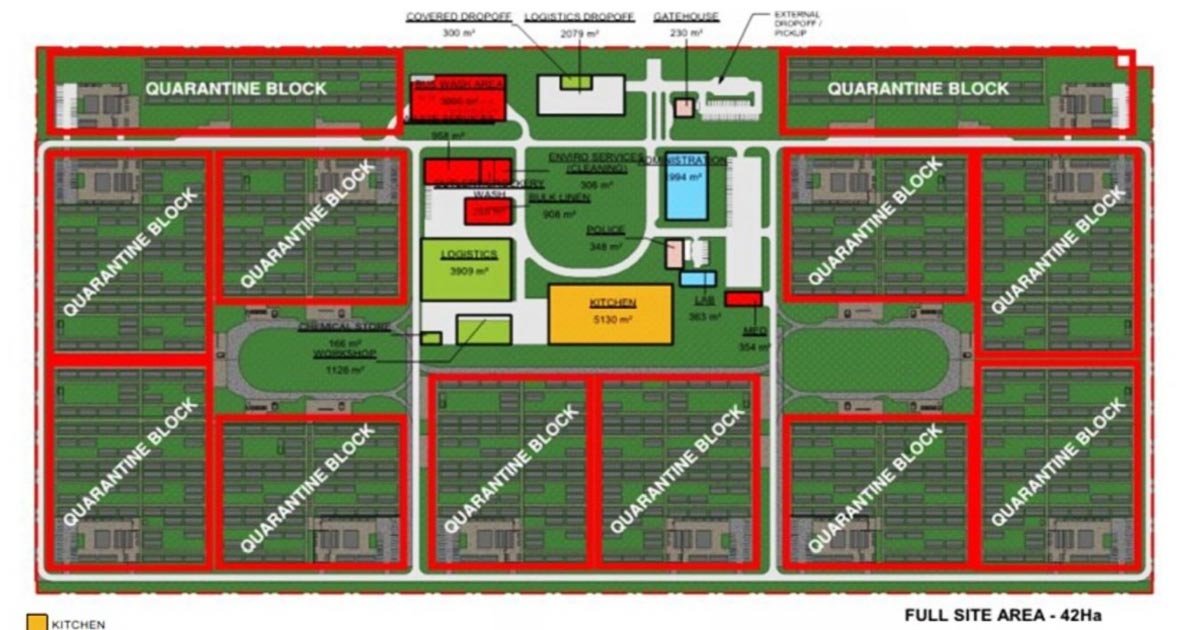 The freedom-crushing restrictions that Australians have been facing have only been getting worse, day by day.

Earlier this month, health officials from down-under announced their plans to build multiple “Mandatory Quarantine Facilities” where they would be able to house rule-breakers who have been ignoring lockdown orders and keep them from leaving.

Authorities won’t play around or ask nicely either.

Once these facilities are built – If the Australian Health Regime deems you need to be put in time-out, you’re going to be taken there by a heavily armed squad of Covid Gestapo.

Now, just a few short weeks after plans were announced to build the camps, tyrannical elected officials are putting out creepy propaganda videos and photos, as part of their campaign for mindless compliance.

Their newest dystopian lockdown facility is called “Wellcamp” and officials are saying it’s “The Best Way To Keep You Safe.”

In one of the videos that were posted by Annastacia Palaszczuk – Queensland’s Minister of Trade – she talks about their phony desire “to keep you safe.” The power-drunk official also claims that the new Vax-entration camps have received massive support from the local citizens she represents.

Our hotels were not meant to be our last line of defence against a global pandemic.

So we’re making it happen.

We’ve reached a joint agreement with Wagner Corporation to build a dedicated quarantine facility at Wellcamp Airport near Toowoomba. pic.twitter.com/Ug4YWmucjN

In addition to these mandatory lockdown camps, Australia has already imposed some of the harshest Covid-19 restrictions the world has seen to date.

They even have their military assisting policemen as they go door to door to perform Orwellian checkups on people suspected of violating lockdowns. Many Australians have already been filmed as they are forced into mandatory isolation by authorities.

These oppressive measures have been put in place despite Australia seeing virtually no new cases of Covid for quite some time.

Just take a look at the most recent official reporting that shows a whopping 4(yes 4..) new cases of Covid were added to Queensland’s number of total active cases, for a grand total of 26 infected individuals in the countries second-largest state.

Palaszczuk alludes to strong support for the project and even seems to be branding the videos with her office campaign logo as if she is planning to use the camps in her platform when she runs again for re-election.

Questionable decision considering the massive nationwide resistance in the country – But hey with all the other draconian policies they’ve implemented, they probably have those same Covid mail-in ballots that ensured a fraudulent victory for Biden.

If you think this is just a problem for our neighbors on the opposite side of the world, think again.

Be on the lookout, and pay very close attention, for similar forced-quarantine sites that may be coming to the US.

The CDC has already published an approach that discusses building these types of covid-internment camps, using terms like “green zone” and “shielding approach” as euphemisms to make it more palatable.

You can bet your bottom dollar – the freedom-hating, power-crazed leftists, who control Biden, cannot wait to throw conservatives into one of these Vax-entration camps.

Embalmer reveals 93% of cases died from the vaccine