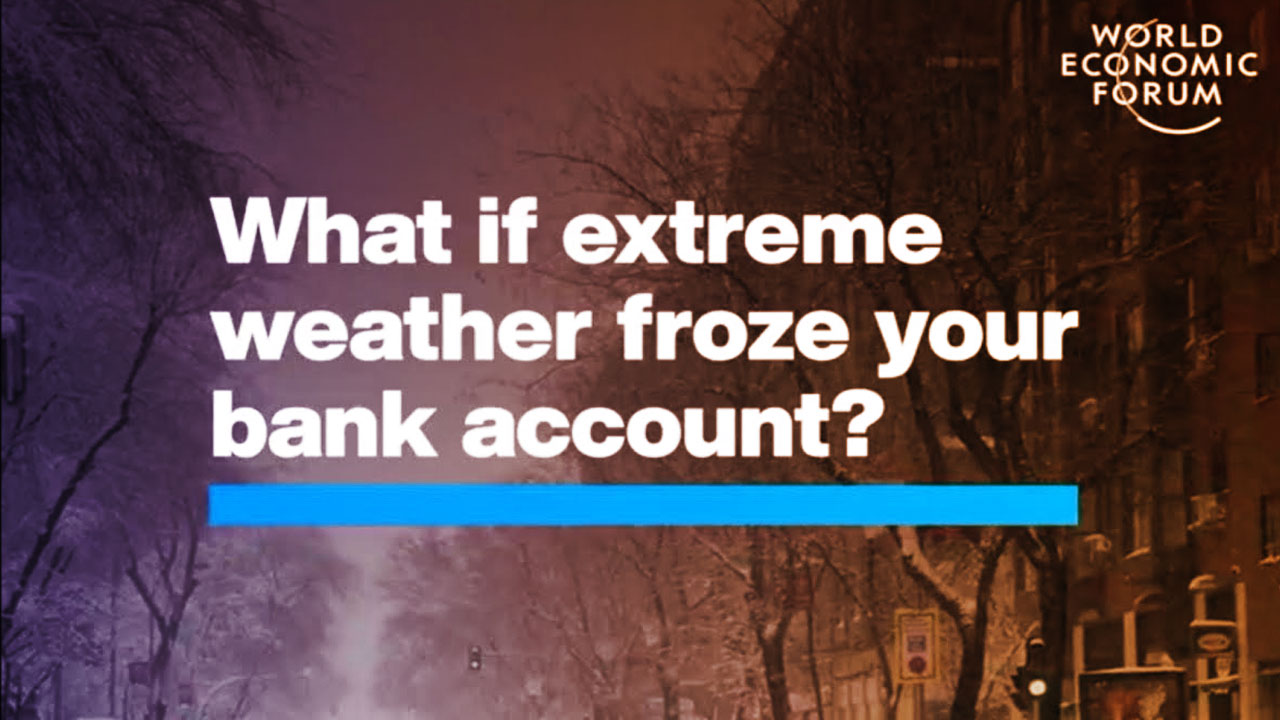 In its latest predictive propaganda, the World Economic Forum asks, “What if extreme weather FROZE your bank account?” It is clear that deliberate interruptions to critical infrastructure are coming.

And these well-structured problems will be blamed on climate change. In order to make the case that an imagined “climate disaster” requires carbon lockdowns and the totalitarian response. For which the technocrats have been salivating for generations. Indeed, the media has already begun to spin the stories like people developing illness due to climate anxiety. Recently a Canadian doctor also diagnosed a patient with climate change.


Globalists always warn before unleashing their evil plans on us as they did with ‘Event 201‘ before the Covid plandemic. Right now climate change is their main agenda. They want us to believe everything wrong with society is because you didn’t take the vaccine, you drove the car, you ate the meat and everything they are doing is for common good. Just change the root cause to whatever fits the agenda and use the media to spread the fear.

What does ‘Extreme weather can freeze your bank account‘ even mean? It is not the first time people have experienced hurricanes or floods but when was your account frozen because of something like that? According to my understanding, they want to pull off Cyber Polygon and blame climate change for it. Cyber Polygon is a must step in their roadmap to totalitarianism. In order to acquire complete control over the internet, a virus-like Skynet is required. Only then people will accept everybody using the Internet without a digital ID is a danger to society and must be shunned. Only the people with vaxx passports should be eligible to use the net.

Our current economic system must be dealt with because it does not give them total control over people’s transactions. If a bank account can be frozen based on some lame snow storm it serves as a proper excuse to let go of this old technology and accept their New World Order. Just more trickery on the gullible masses. The idea is to only allow order followers in the society.

There is no such thing as climate change. But you could get beaten to a pulp for saying something so factual. Everybody believes humans are dangerous to nature and it can only be solved by reducing individual carbon footprint. Things may not look serious at the moment but they can change in a matter of days. Time for warning people is rapidly passing by but there are only a few who are paying attention. Would it surprise you if you wake up one day and are not able to access your bank account? To make it hilarious your bank tells you because it’s snowing heavily we are unable to support transactions.

Should you be preparing for the upcoming collapse by hoarding food and essentials. It’s up to you. But there is something way more important than prepping and i.e calling out the name of the God who died for your sins. Because sooner or later there will be no place to run. Even your supplies will run out but the whole armor of God will never betray you.