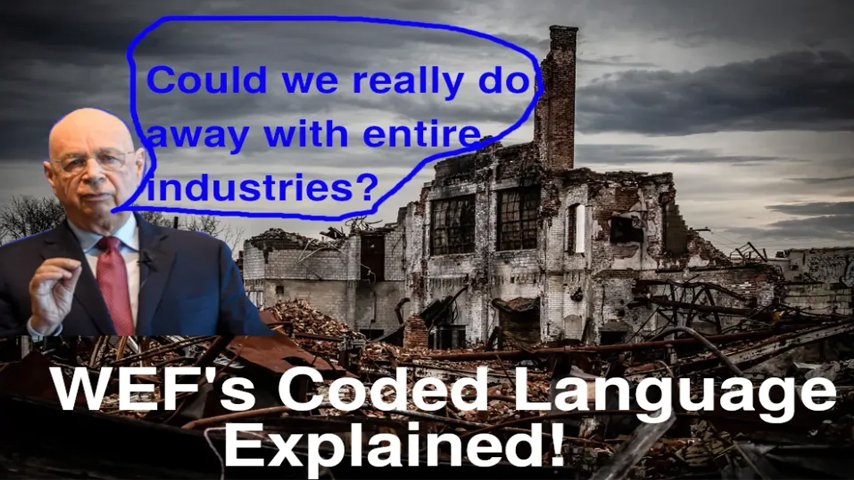 What if I told you that the World Economic Forum’s climate agenda is to stop economic growth, and shut down many industries, which would be accomplished by having a WEF-designed artificial intelligence system decide which industries are to be liquidated? And that the WEF expects working people to be paying money to the masses of economically displaced people, to induce them not to work?

You would probably laugh at me, call me a crazy person, and refuse to even consider that seriously. That story could not possibly be true! An important global organization cannot propose such an absurdity! What a stupid conspiracy theory, probably invented by some weirdo who is living under a rock!

If that is your reaction, you are a perfectly normal person, as no well-adjusted individual would ever come up with such nonsensical proposals. Even I, if I heard something like that from a random individual I just met, would probably just dismiss such things as crazy talk.

All good, but this very proposal is the central part of the WEF’s agenda, proudly featured on its homepage. I did not come up with anything it did not actually say!

I discussed their “can the economy grow forever” proposal in a separate article of mine. Check it out:

The gist of the WEF’s proposal, and the attached youtube video, is as follows:

Does this sound totally bonkers? Not sure about you, but it does sound insane to me. And yet, it is all there in the WEF-endorsed video, and the article is prominently featured on the WEF home page. I did not invent anything, I just understood the article and retold its meaning in plain language.

There is no “conspiracy theory” concocted here, and everything was obtained by simply reviewing ONE WEF agenda article and its attached video.

The Terrifying Vacuity of Klaus Schwab

Eugyppius was my first Substack subscription and I always love to read his writings. He, quite correctly, notes the vacuity, or emptiness, of the language used by Klaus Schwab in his book. He notes the seeming pointlessness of the endless passages in it.

These are brief statements that are so tautological, banal or bizarre that they ought to embarrass any author.

Eugyppius’ conclusion, which I respect but cannot agree with in relation to the article we are reviewing today, is that

The Davos crowd see themselves as post-ideological, technocratic problem-solvers, but it’s impossible to deny that some kind of abstruse, malformed ideological system pervades Schwab’s work. It might be too ungainly and broken to acknowledge or defend, and it’s remarkably hard to describe, but it’s there. Postwar optimism and the generations of uninterrupted technological progress that followed, encouraged some people to believe that we were on the verge of a new world, one where a utopian global order would supplant both nation states and corporations, ushering in a post-capitalist, post-nationalist era, where all our most pressing problems would be solved. Yet the nations states stayed around, for-profit businesses are still here, and technological progress has stalled. What remains is a lot of jargon and vacuity, signifying nothing.

Is the most powerful supranational organization, whose Young Leaders lead governments of many important countries, states, or territories, or collectively own and manage trillions of dollars, simply a nonsense production factory? Are their messages “signifying nothing”? Why does the WEF exist, then? To blather nonsense? Do people gather in Davos for nothing but vacuous press releases?

Or is there something important hidden behind the seeming lack of understandable intent?

Is there a possibility that important, world-changing ideas are wrapped in layers of feel-good, patronizing, virtue-signaling words, intentionally strung together into endless, hard-to-understand sentences?

My answer is: the WEF purposely makes their proposals to be difficult for ordinary people to comprehend. To a person reading without paying close attention, their writings appear to be feel-good generalities written without a purpose — and yet when understood fully, they contain radical proposals that would upend the most basic foundations of our Western societies.

When reading the “WEF Agenda” articles, such as “can the economy grow forever” article, I was struck by the verbosity, meaninglessness, empty generality, and vacuity of the language, just like eugyppius was.

Consider this passage from the WEF’s agenda article we are discussing:

The idea of endless economic expansion might feel academic at this moment in history. The global economy is entering a slowdown; inflation and rising living costs are nudging the world to the brink of a wholesale recession.

But perhaps it is a moment to take a pause, to ask how we can work together to build a stronger and more sustainable economy. In this blog, President of the World Economic Forum Borge Brende explains why global cooperation is key.

The above is really a bunch of generalities. Very little in these two paragraphs is actually instructive and the text drones on about “sustainable economy building”. Any normal reader who takes a look at this might get bored, tune out, and switch to doing something else.

This is what the WEF needs. The WEF does NOT want regular people to understand what it is planning.

Getting bored and tuning out, was actually my own first reaction, when I saw that WEF article out of pure curiosity and in hope that there might be something newsworthy to write about. I almost closed that web page! But then I told myself to stay on, as the title “Can the economy grow forever” was kind of ominous. I had to watch a six-minute video with completely boring, patronizing, and pointless nonsense packed into the three-minute-long first half. So, after watching the first three minutes, I had the strongest urge to stop wasting my time and close the video.

This all changed when I got to the second half of the video! It was the scariest and juiciest plan to write about!

The video stopped being boring once I understood what it advocates for. If you have good listening skills, take your time to watch it. Skip the first three minutes if you want.

A couple of screenshots:

But what the video actually proposes is 1) shutting down entire industries, 2) with the choice of industries to shut down decided by an AI (no kidding), 3) paying displaced people not to work via Universal Basic Income, and 4) stopping production of things deemed less necessary by the WEF.

This is Almost Coded Language

Coded language, sometimes called dog-whistling, refers to saying things that appear to be innocuous, but actually carry hidden meanings understood by their intended recipients. A “dog whistle” originally referred to an innocuous-sounding signal to a trained attack dog to assault someone. Amusingly, this trick is also used by K-9 units to make their dogs bark when their handlers want to search a car, regardless of what the K-9 dog actually smells. The court reviewing the video of the search might not notice the dog whistle and thus find “probable cause” in the dog barking.

In the case of the WEF, their approach to communicating is not about using hidden meanings, but about drowning their true intentions in a confusing stream of empty virtue signaling words like “sustainable economy” and being “less dependent on jobs”.

WEF’s language has a plain meaning, that is obvious to any reader who pays very close attention, but appears vacuous and nonsensical to people not paying close attention — and is intended to induce boredom.

Universal Basic Income (UBI) mentioned in the WEF article, is a scheme where people are paid NOT to work, using taxes on people who do work. The following example will show that UBI is a tool to put all people in poverty and reduce economic output. It works like this:

Then WEF comes and introduces UBI, with some incentives remaining so that some people would still work. Adam would choose to continue working, while Bob would choose to be paid for NOT working.

Adam would continue to earn $5,000 per month, while Bob would earn $0 per month due to not working, but would receive UBI. Since the government still needs the same $2,000 in taxes that it previously received from Adam and Bob, Adam would now have to pay $2,000 in taxes. So Adam’s after-tax, but before-UBI, income would be $3,000.

This amount of $3,000 would need to be split between Adam and Bob to make sure that Bob gets a “living income” while Adam has an incentive to work.

Now “shutting down entire industries” suddenly makes sense, when people can only afford a third of the goods!

Is that the future that we want?

There are, of course, plenty of badly concocted conspiracy theories that are NOT true and are totally crazy. The problem is that some stories, while 100% based in fact, such as my retelling of one WEF article based on its plain meaning, sound so insane that they can easily get depicted as a “crazy conspiracy theory”.

Just because no normal person can come up with such inane proposals, a typical reader would think that a serious organization like the WEF would never put forth ideas that are so batshit crazy. So, they blame the messenger and think that they just heard a bizarre conspiracy theory. WEF’s use of boring, vacuous language is very handy because makes it harder to verify stories about the WEF.

The WEF has a radical plan for our future, which is laid out in its articles and communique. To understand their plans, we need to spend an effort understanding the hidden, but plain, the meaning of their texts.

UK Energy Crisis Could Be Worse Than 2008 Financial Collapse