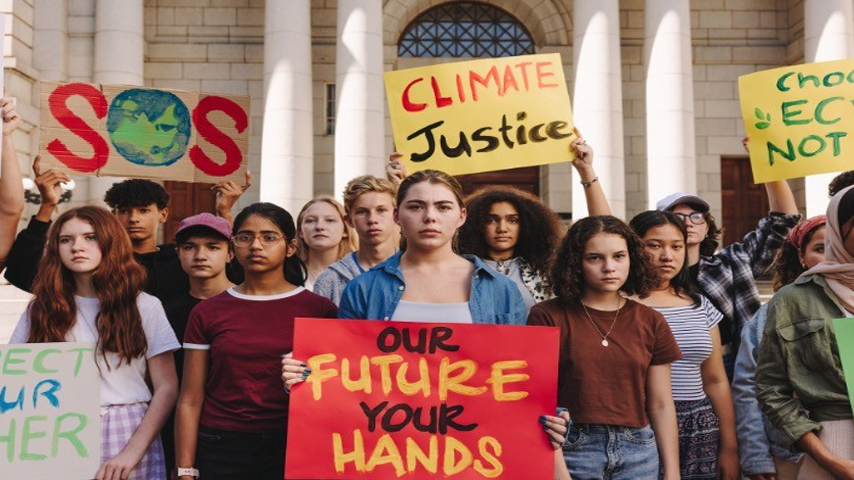 The headline to an article posted on the website of the World Economic Forum (WEF) on August 26 asks, “Should schools teach climate change studies?”

The question is rhetorical, of course, since the WEF globalists have been in the forefront of the worldwide push for “climate change” indoctrination of children and youth for decades. The article begins with this familiar farrago: “As the effects of climate change become ever more apparent, this summer has brought intense heatwaves, severe flooding and damaging storms.” Although the WEF statement does not explicitly claim that the severe weather events mentioned are being caused by man-made global warming, that is the implicit message, one that is piggybacking on the thousands of stories in the “mainstream” media that do explicitly charge that “extreme weather” is increasing due to climate change. (Climate alarmists and their media allies have been escalating their apocalyptic claims in this area for the past decade, but as we have shown in the past — and show here regarding current claims — top climate experts have debunked these wild assertions. Hurricanes, droughts, floods, wildfires, heatwaves, and storms have not measurably increased in number or intensity in recent years or decades. See here, here, here, here, and here.

“Last year,” the WEF continues, “climate anxiety was revealed to affect the daily lives of nearly half of young people, according to a global study.” The WEF provides a link that takes one to a press release from the University of Bath in the UK boosting the “study” by the university’s “climate psychologists.” “Nearly half of global youth surveyed (45%) say climate anxiety and distress is affecting their daily lives and functioning — according to results from the largest scientific study into climate anxiety in children and young people,” the Bath press release claims.

The Bath study, published in The Lancet Planetary Health and titled “Climate anxiety in children and young people and their beliefs about government responses to climate change: a global survey,” says it “surveyed 10,000 children and young people (aged 16–25 years) in ten countries (Australia, Brazil, Finland, France, India, Nigeria, Philippines, Portugal, the UK, and the USA; 1000 participants per country).”

According to the study:

Respondents across all countries were worried about climate change (59% were very or extremely worried and 84% were at least moderately worried). More than 50% reported each of the following emotions: sad, anxious, angry, powerless, helpless, and guilty. More than 45% of respondents said their feelings about climate change negatively affected their daily life and functioning, and many reported a high number of negative thoughts about climate change (eg, 75% said that they think the future is frightening and 83% said that they think people have failed to take care of the planet). Respondents rated governmental responses to climate change negatively and reported greater feelings of betrayal than of reassurance. Climate anxiety and distress were correlated with perceived inadequate government response and associated feelings of betrayal.

The study concluded that the widespread “climate anxiety and distress” among children and youth must be blamed on the failure of governments to enact the oppressive restrictions advocated by climate fanatics. It is not the incessant bombardment of children with “climate emergency” frightmares (melting ice caps, rising sea levels, drowning polar bears, dying coral reefs, droughts, floods, wildfires, species extinction, etc.) that is causing the devastating mental anguish. Oh no, of course not; the “researchers” don’t even consider that. No, they say record numbers of kids are going into mental meltdown because governments have refused to lock down the entire planet in a “green” globalist-communist regime.

From The Lancet Planetary Health article:

Climate anxiety and dissatisfaction with government responses are widespread in children and young people in countries across the world and impact their daily functioning. A perceived failure by governments to respond to the climate crisis is associated with increased distress. There is an urgent need for further research into the emotional impact of climate change on children and young people and for governments to validate their distress by taking urgent action on climate change.

It would seem worthy of note that the lead author, Caroline Hickman, not only is a leader of the Climate Psychology Alliance (a left-wing outfit that demonizes as “deniers” citizens and world-renowned scientists who dissent from global warming fanaticism), but also has been featured as an author for the WEF. But neither the WEF article nor the University of Bath press release — nor The Lancet, for that matter — is anxious to point this out. Also, Hickman and Dr. Liz Marks, her co-lead author of the Lancet article, were both promoted by the WEF in January of this year, after the Lancet article appeared. “Our children’s anxiety is a completely rational reaction given the inadequate responses to climate change they are seeing from governments,” Hickman said in a WEF posting. “Children and young people are now mobilizing around the world and taking governments to court; arguing that failure to act on climate change violates their human rights.”

“The decisions that those in power are making now will have the greatest impact upon the youngest and future generations, but they feel dismissed and ignored,” said Liz Marks, also from the University of Bath’s Department of Psychology, in the same WEF article. “We must consider the futures of young people, listen to their voices and place them at the center of decision making.”

That’s right, the sanctimonious duo and their “climate psychology” comrades engage in the most despicable mass abuse and exploitation of children and youth and then pose as the saviors of those same abused and exploited victims.  In other words, Hickman and Marks are hardly the impartial “social scientists” they pretend to be. They are propagandists in the multi-trillion-dollar Climate Lobby. They are mouthpieces and academic prostitutes for the WEF’s Great Reset.

Klaus Schwab and the billionaires club known as the World Economic Forum are not satisfied that hundreds of millions of school children across the globe have been traumatized and afflicted with ongoing anxiety and distress caused by nonstop United Nations/WEF global warming propaganda.  Instead of sensibly reassessing their fright-peddling indoctrination, which amounts to colossal psychological child abuse, they want to go much, much further. The WEF globalists are pushing the UN’s proposal for compulsory “climate change studies” as “a core component of all education systems at all levels by 2025.”

Moreover, the WEF’s August 26, 2022 article praises the government of Italy for being the first country to mandate (in 2019) the UN’s compulsory climate curriculum proposal for all schools.

“Despite the UN calling for climate studies to be part of teaching in all schools by 2025,” the WEF laments, “a UNESCO study into 50 countries revealed that more than half make no reference to climate change.” But, here’s the WEF’s good news: “However, some countries are making good progress, such as Italy, which in 2019 became the first country to make climate-related studies compulsory in schools.”

“The entire ministry is being changed to make sustainability and climate the center of the education model,” said Italy’s then-Education Minister Lorenzo Fioramonti in an interview with Reuters in 2019. “I want to make the Italian education system the first education system that puts the environment and society at the core of everything we learn in school.”

Again, though, the WEF and its media shills fail at full disclosure. Mr. Fioramonti, whose mandatory curricula they endorse, is an “Agenda Contributor” to the WEF and has been generously promoted by the organization for more than five years.

Fioramonti, who infuriated many Italians with his radical environmental proposals and with his encouraging students to skip school to participate in global warming protests, resigned from the government in December of 2019 — but his legacy of climate brainwashing lives on in Italy’s schools.

The UN and its assorted agencies and affiliates (UNESCO, UNICEF, WHO, World Bank, etc.) have been cranking up their kiddie/youth climate mobs in preparation for the UN’s upcoming Climate Change Conference to be held November 6-18, 2022, in Sharm El Sheikh, Egypt. The WEF/UN master planners will not be satisfied, apparently, until they have a massive army of hysterical, sanctimonious Greta Thunberg clones screaming “HOW DARE YOU!” and acting as Maoist Red Guards to intimidate anyone who dares to challenge the totalitarian agenda of the climate fanatics. This is not new; the globalists have been building this force of kiddie activists for over a decade, as our articles linked below show. However, now with Biden’s handlers running the White House, they have an enormous advantage they didn’t enjoy during the four years of the Trump administration: the full political and financial support of the federal government. The battle is on — and will intensify as the UN climate conference approaches in November.

Cloud wars in the Middle East: Governments are working to drain the heavens dry with geoengineering

Bill Gates: Next Pandemic Likely to be Caused by Climate Change