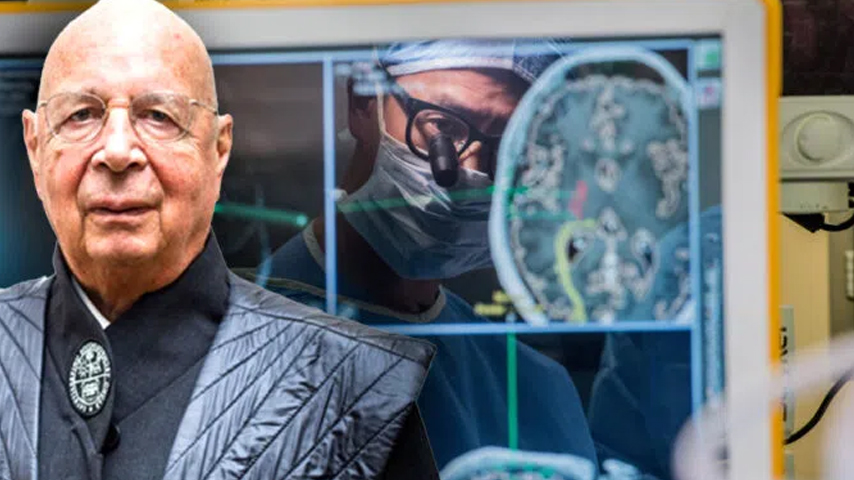 According to WEF director Klaus Schwab, the mega-rich heir of a Third Reich industrialist, the “brain implants” will be rolled out within 10 years — and there is “nothing you can do about it!”

The disturbing mind control fantasy laid out by a clearly aroused Klaus Schwab was recorded during a 2017 World Economic Forum summit in Davos, Switzerland, and has only recently resurfaced in the public domain. According to Schwab’s timeline for the rolling out of brain implants, they will be in use by 2027 — just 5 years from now.

The resurfaced video comes on the heels of several other disturbing video clips and statements in which Schwab and his fellow elites at the WEF have openly expressed their desire to live a life of degradation and humiliation, before falling victim to a mass-extinction event. The WEF is now openly attempting to force humanity to eat bugs and insects and drink recycled toilet water, block out the sun with “space bubbles,” “capture” powerful positions in “penetrated” governments worldwide, and finally wipe out at least 94% of the world’s population.

The WEF is so arrogant in its goals, and so certain that they cannot be stopped, that they are willing to admit their nefarious goals to the public.

During his 2017 talk on forcing “implants” into the brains of ordinary humans and tracking their every thought, Schwab was joined on stage by Google co-founder Sergey Brin, a key player in the Big Tech transhumanist scene.

Transhumanist artificial intelligence, “touches every single one of [Google’s] main projects, ranging from search to photos to ads,” Brin said on stage, alongside Schwab, adding that WEF-approved tech tyranny touches “everything we do.”

Lauding advancements in what has become openly anti-human technology, Schwab told Brin and those in the audience that, within 10 years, everyone on earth will be wearing brain implants. This will allow the WEF and their associates to “measure your brain waves” and “immediately tell you how the people react.”

Very useful data, I’m sure you will agree, for the elites in pursuit of their goal of worldwide totalitarian fascism with the human race on its knees.

“You cannot stop it!” Schwab bragged about his tyrannical plan.

It’s not the first time the WEF has admitted they are fascinated by the possibilities inherent in mind control technology. Earlier this year they were caught scrubbing the internet of their plans for using mind control on the masses via cutting-edge sound wave technology.

Unfortunately for Klaus Schwab’s WEF, the internet is forever.

In 2018 they published an article entitled, Mind control using sound waves? We ask a scientist how it works. Of course, it was scrubbed from their site, but thanks to the Wayback Machine we have the evidence of their technocratic depravity.

While at face value, many may dismiss Schwab’s brain implant fantasies as the stuff of science fiction movies, The People’s Voice has closely covered the powerful World Economic Forum and their dystopian plans for humanity, showing that the statements of Schwab and his associates should be taken very seriously.

As previously mentioned, Schwab is the son of a powerful Third Reich industrialist. By way of the World Economic Forum, where he has united with Israeli scientists, Big Tech oligarchs, and Deep State operatives, Schwab plans to roll out what equates to real worldwide fascism – a global merger of the corporation and the state.

Sovereignty will be a concept that exists only in the distant past. Constitutions won’t be worth the paper they were written on. Presidents and Prime Ministers will be puppets of the globalist oligarchy.

Once the WEF has “captured” enough seats in governments, a Great Reset, powered by Big Tech’s “fourth industrial revolution,” will reshape the world, and supposedly democratically-elected governments will share legislative power with mega-corporations and the WEF.

According to the WEF, after the “fourth industrial revolution,” human bodies will be “so high-tech we won’t be able to distinguish between what’s natural and unnatural.”

With their covert political operations already well underway, the World Economic Forum boasts powerful politicians among its ranks. While the WEF has mostly recruited leftwing authoritarians, its numbers have been swelled by conservatives including Congressional Republicans Dan Crenshaw and Elise Stefanik.

Klaus Schwab himself has personally mentioned the likes of California Governor Gavin Newsom and authoritarian Prime Ministers Justin Trudeau of Canada and Jacinda Ardern of New Zealand as three of his favorite WEF-corrupted government officials.

Technology is at the heart of Klaus Schwab’s not-so-secret agenda. Last week his WEF deputy, Yuval Noah Harari, explained that the global elites will survive an upcoming mass-extinction event courtesy of a “technological Noah’s Ark.”

If you don’t want a future in which you and your children wear brain implants that allow the globalist elite to read and control your minds, it’s time to make a stand.

If you are interested in averting a mass-extinction event survived by a tiny minority of the global population aboard their “technological Noah’s Ark”, then the siren call of the WEF must be resisted. The statements of Schwab and his associates must be taken very seriously.

DAYS OF LOT: Staggering 42% of people say they would have sex with a robot

Elon Musk Is Driving Us Toward A “Smoother” Singularity