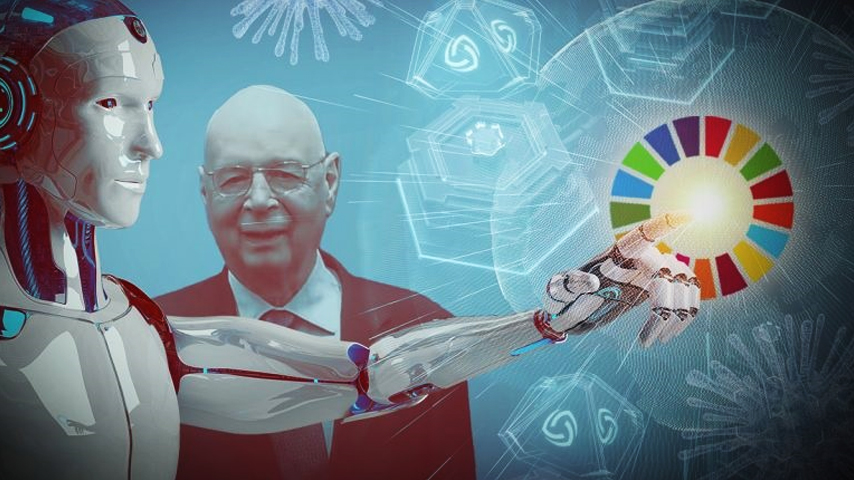 In a new step, the World Economic Forum has removed Cyber Polygon from its webpage. Try to search it online. You will find that: 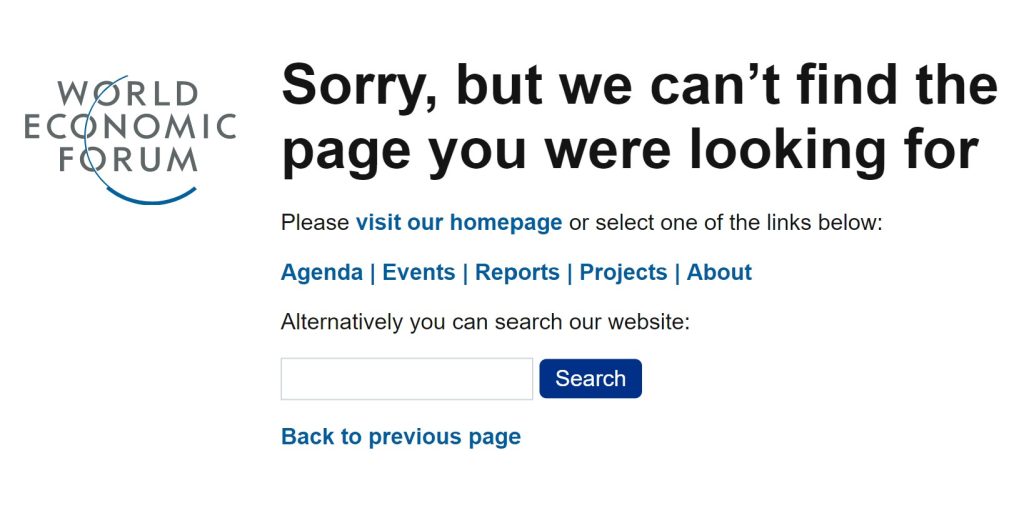 Now this is what the webpage was looking a few days ago: https://archive.ph/tKU30

In early 2021 at the height of media-generated covid fear the World Economic Forum released a series of panel discussions and white papers outlining a “pandemic” of a completely different nature; what they referred to as an impending “cyber-attack with covid like characteristics.” The program agenda at the WEF was titled “Cyber Polygon” and headed with unsettling zeal by globalist Klaus Schwab.

The WEF and Schwab are best known for two things:

1) Their involvement in a war game called Event 201 which simulated the global spread of a coronavirus pandemic. This simulation was held two months BEFORE the real thing happened in early 2020 and a majority of the measures played out in the game were in fact implemented almost immediately following the outbreak.

2) Klaus Schwab’s exciting announcement that the pandemic was the perfect “opportunity” to institute what he calls the “Great Reset” of the global economy along with the rise of the Fourth Industrial Revolution, which is the complete centralization of world trade and governance into a global socialist empire where you will “own nothing, have no privacy, and like it.”

The fact that the WEF was so prescient when it came to the covid pandemic was quite a miracle. It was almost as if they knew it was going to happen, and their political friends in various nations wasted no time carrying out their draconian mandate policies around the world. But something happened that seemed to throw a monkey wrench into the plan – Event 201 predicted an initial death toll of around 65 million people, but this didn’t happen. In fact, the median Infection Fatality Rate of covid was only 0.27%. Covid wasn’t killing enough people, and the public was starting to question the efficacy of the lockdowns, the useless mask rules and the need to take an experimental mRNA vaccine with no long-term testing to prove its safety.

In the US specifically, conservative states began to rise up and block the covid agenda. Today, the CDC and the Federal Government have declared the removal of most mandates and even leftist blue states are beginning to relent. However, most conservative red states have been without mandates for well over a year to a year-and-a-half. We’ve been without restrictions this whole time, and the government is acting as if they have just “allowed us” to be free again.

The truth is, the globalists at the WEF and their partners abroad FAILED in their efforts to institute medical tyranny, at least in the US and in certain parts of Europe. The agenda collapsed because science was against them in every respect. They had nothing. With 99.7% of people safe from covid, it was impossible to engineer enough fear in enough of the population to get them to relinquish their freedoms.

So, for those of us that have been tracking these events carefully, the alarm bells really started ringing when the WEF switched gears and suddenly shifted focus to a cyber-attack narrative. Was this Plan-B?

In April of 2021, I published an article titled ‘The Globalists Will Need Another Crisis In America As Their Reset Agenda Fails.’ In that article, I outlined the most likely scenarios for the next disaster event, which included war in Ukraine as well as a global cyber-attack that disrupts the supply chain. In that article I stated:

“The media and the Biden Administration are very busy trying to create tensions with Russia over Ukraine. There are renewed tensions between Iran and Israel and continued destabilization by the West in Syria. And, a rising danger of confrontation with China over Taiwan…

There is … a narrative advantage to global tensions; when presented with a foreign threat, are Americans more likely to reject notions of rebellion against government trespasses? I have no doubt that the establishment will try to claim the liberty movement is not a movement for freedom, but an “astro-turf” movement created by the Russians to destabilize America. This has been the leftist media propaganda strategy for years now; so why would they stop?”

In June of 2021, I wrote more specifically on the suspicious nature of Cyber Polygon in my article ‘Cyber Polygon: Will The Next Globalist War Game Lead To Another Convenient Catastrophe?’ Then in July of 2021, I wrote an article titled ‘What If The Next Major Cyber Attack Targeted The Internet?’ In it I made this observation:

“In June of this year there was an internet outage event that led to large swaths of the web going dark, including a number of mainstream news sites, Amazon, eBay, Twitch, Reddit and a host of government websites went down. All this happened when the content delivery network (CDN) company Fastly experienced a bug. Although Amazon had its website back online within 20 minutes, the brief outage cost the company over $5.5 million in sales (and that’s just one website!).

Fastly identified and fixed the problem within two hours, and continues to claim the outage had nothing to do with a cyberattack. However, it did reveal a huge vulnerability for the internet (what von Clausewitz would’ve called a schwerpunkt). A large portion of the web is dependent on only three CDN companies, including Fastly.

Here is what concerns me: If there was a cyberattack on such weak points in the web, and the attack involved a malicious worm or another highly infectious weapon, then Klaus Schwab could very well get his cyber pandemic.”

Today, the war tensions with Russia are now about to overflow and I suspect it’s only a matter of time before China also begins operations against Taiwan. But there is a much bigger threat on the horizon. I have little doubt at this stage that a false flag attack on the US or Europe (or both) is now imminent, and what I mean by “false flag” is that the attack will be designed to benefit the globalists and not necessarily the country that is blamed for it.

As I have noted in the past, Vladimir Putin is a long-time associate of numerous globalists. His friendship with New World Order ghoul Henry Kissinger started decades ago and they continue to meet for regular lunches as Kissinger acts as an adviser to multiple branches of the Kremlin. Putin has also maintained a steady relationship with the WEF and Russia even joined Klaus Schwab’s Fourth Industrial Revolution Network just last year. The claim that Putin is anti-globalist is a lie, he is deeply involved in the globalist system and always has been.

The globalists are playing BOTH SIDES of the Ukraine conflict. This is reality. It’s very important to understand and accept this fact otherwise you will not be able to grasp the events that happen next.

Putin recently threatened western governments with reprisal the likes of which they have never seen before if they try to interfere in Ukraine. The problem is that many in the mainstream and alternative media automatically assumed this was a threat of nuclear war. I don’t think this is what Putin was referring to. I have another theory…

The globalists are unlikely to spend the past several decades building up one of the most complex technocratic control grids in history to track and dominate the public only to then annihilate it all in the blink of an eye with nukes. A post-nuke environment would be impossible for them to control.  What is more likely, in my view, is a massive cyber-attack that targets the functionality of the internet itself, and it would have to happen relatively soon.

The amount of economic and business operations tied to the web is staggering. Even if the internet was to go down for a mere two weeks, the repercussions to our markets and to our supply chain would be devastating. By extension, the benefits to the globalists would be immense. They could implement filters and firewalls on any part of the web they don’t like (including the alternative media) and claim that this is to protect the internet from possible sources of viral spread. They could whittle the web down to only a handful of approved corporate and government sites all in the name of protecting the integrity of the net.

Furthermore, such an attack would be a perfect scapegoat for the already crashing economy and rising inflation. At that point, the central banks that are truly responsible for our financial instability could simply say that everything was “about to go back to normal” until (Russia or China) spread the cyber virus. And, maybe Russia will be involved, but it will not be Putin that gives the order, it will be his globalist partners behind the curtain.

The hype machine surrounding Ukraine is in overdrive right now. It’s a little bizarre to me how much panic and indignance is being drummed up. It’s as if people have forgotten that the US government just spent well over a decade devastating a country like Iraq for no good reason. No one seems to be mentioning the hypocrisy of demanding an all-out war against Russia when US campaigns in Iraq killed hundreds of thousands of civilians and very few countries batted an eye about it.

Clearly, the controlled media is trying to convince the western people to support a direct military confrontation with Russia over a conflict that has nothing to do with us. There are even numerous GOP neo-cons out there (Lindsay Graham, I’m looking at you) campaigning for true conservatives to go along with a war footing. I don’t think it’s gaining much traction, but what has worked as an effective manipulation against conservatives in the past?

The globalists need another Pearl Harbor – A 9/11 attack or something even bigger. They need something that will enrage the American population, specifically conservatives. They need a crisis of epic proportions to lure us into an emotional response and the abandonment of logic. They also need a scapegoat disaster that they can use to lay the blame for the impending economic crisis.

I predict this event will come in the form of a large-scale cyber-attack, and the escalation of events suggests to me that they will try to implement such an attack in the near term. Perhaps within the next couple of months and certainly before the year is over.

This is not about Russia. It’s not about Ukraine. The real war is between free peoples and the globalists. When they are removed and their puppets are removed, the majority of these disasters will stop. As long as they remain in power, the crisis events will only accelerate and increase in frequency until they find something that works; something that makes most people willing to give up their liberties in exchange for the false promise of security.