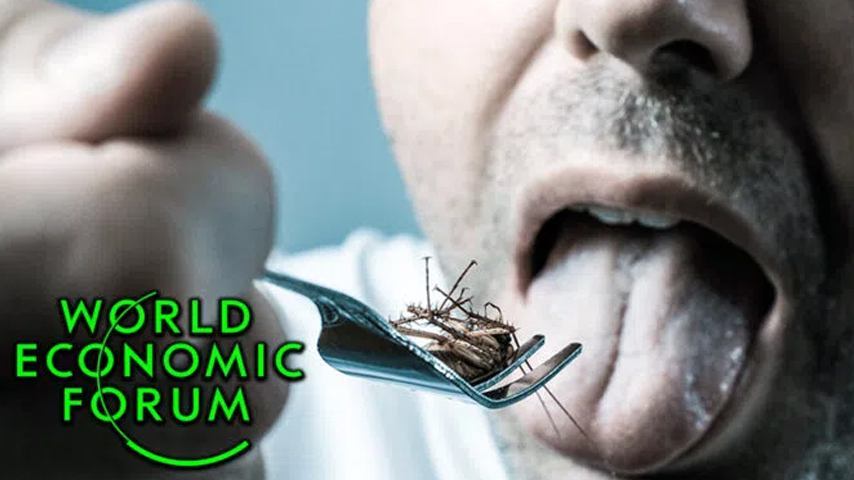 Most humans have a natural aversion when it comes to insects. The sight of some types of bugs, like cockroaches for instance, provokes an instant feeling of disgust.

This is a near-universal trait in humans. It is believed to be instinctual. Our natural inclination to recoil when a bug is anywhere near us could be our brains warning us that these things could bite, sting, infect or even poison us to death. Also, considering the fact that insects feed on filth, decay, and excrement, the mere sight of them is enough for our brains to send an alarm signal telling us that something is wrong.

This is a good thing. It keeps us safe and free from disease.

With all of that being said, the global elite (most notably the World Economic Forum) want us to put cockroaches in our mouths, chew on their crunchy exterior, and swallow their viscous green insides. They want us to eat cockroaches while smiling, owning nothing, and pretending to be happy.

The bug-eating agenda is not a joke. It’s starting to seep through mass media and even the educational system. The goal is to normalize and even glamorize the consumption of bugs.

So why are the powers that be laser-focused on forcing the masses to eat crickets, mealworms, and cockroaches? Here’s a look at the situation.

First, you must wrap your head around one important fact: The WEF is looking to redefine what it means to be a human on Earth. They believe that we have too many freedoms and that we consume too many resources.

The WEF is not merely trying to penetrate governments and control economies, it wants to redefine the meaning of life on Earth. Nothing less.

This is an article on the WEF’s actual website. They’re out of their minds.

In short, they see us as cattle. Other than controlling every aspect of our lives, they also want us to consume fewer resources. This is where the bug-eating agenda comes in. Using buzzwords such as “sustainability”, the global elite is defining what is a “responsible” diet while increasingly shaming those who eat meat.

Other than trying to indoctrinate the environmentally conscious using graphs and figures, the elite is in full propaganda mode to promote bug eating.

The bug-eating agenda has now moved to the next phase of the plan. Celebrities are eating bugs on camera. Mainstream media journalists are writing articles promoting bug-eating as an inevitability. Schools are forcing children to eat bugs in class.

At the bottom of the article is a creepy video of Nicole Kidman eating live insects which she calls “micro-livestock”.

That’s right, an A-list movie star was recruited to seductively consume insects on camera to convince the masses to do the same. This is cringed propaganda 101. Fortunately, the YouTube comments give us hope.

One movie star is not enough. They need many. Robert Downey Jr. is promoting cricket protein on the late-night circuit. And at the bottom of the article is a video of Lupita Nyong’o using her acting skills to GO CRAZY over eating ants.

Other than using celebrities, the elite likes to use the “news”. As you probably know, a great number of “news” articles are actually thinly veiled attempts at propaganda.

Here’s a headline from the BBC. There are a few things to note about the headline above. First, the push for synthetic “meat” is part of the same exact agenda. Second, this article was written by an “environment correspondent” and is filed under “climate change” as a topic. This is the angle taken to coerce and shame the world into adopting a diet based on insects and synthetic foods.

And here’s an article by the elite-owned The Economist promoting exactly the same diet: Insects and lab-grown meat.

Of course, the elite knows very well that indoctrination is most effective on young people. Take a look at this poster currently plastered in California’s public schools.

It is during their formative years that humans adopt habits that will follow them for the rest of their lives. For this reason, the bug-eating agenda is infiltrating schools worldwide.

In the video included in the video below, children are temporarily allowed to remove masks … to eat crickets. They’re creating a compliant, WEF-friendly generation.

As you can see, the powers that be are laser-focused on forcing humans to consume a specific set of insects namely mealworms, crickets, cockroaches, and locusts. Considering the wide range of potential foods that can be consumed by humans, why are they focusing on these few, particularly disgusting species? Is it truly because they are “sustainable” … or is there a more nefarious reason behind it all?

If one steers away from the obvious propaganda and looks into the scientific research conducted in the past decades, some worrying facts quickly surface. The main one is: Insects are toxic.

Other studies focused on chitin – a natural structural component found in insects’ exoskeletons. A 2007 study published in a peer-reviewed Nature journal concluded that chitin causes an allergic reaction in humans.

Maybe that’s our body’s way of telling us that we shouldn’t eat the exoskeleton of insects.

Another study about chitin concludes:

And another study focusing on chitosan – a chemical compound made from chitin – discovered that its consumption leads to the depletion of vitamins in the human body, which leads to disastrous effects.

As if that wasn’t enough, here’s a headline from 2018, before the media were onboard with the insect propaganda.

While insects might show good nutritional value on paper, they might be outright toxic to the human body. Studies found that they can harbor parasites, affect the immune system, trigger allergies, and deplete vitamins from the body. Despite these glaring issues, the elite is going full-steam ahead with this agenda.

As the masses are being pushed towards the consumption of insects and synthetic products, some odd events are happening around the world directly affecting the food supply.

In the Netherlands, the government engaged in a war with livestock farmers because of “pollution”. The goal: To reduce the number of pigs, cattle, and chickens by over 30%.

And in the US, an unusual number of food processing plants have burned down in the past months.

There is a lot of speculation surrounding Bill Gates’ farmland grab in America. Why is he buying so much farmland? A look at the official website of the Bill and Melinda Gates Foundation provides some clues.

Considering the fact that humans have a natural aversion to insects, why are they insisting on forcing us to ingest them? Because, to the elite, bad is good.