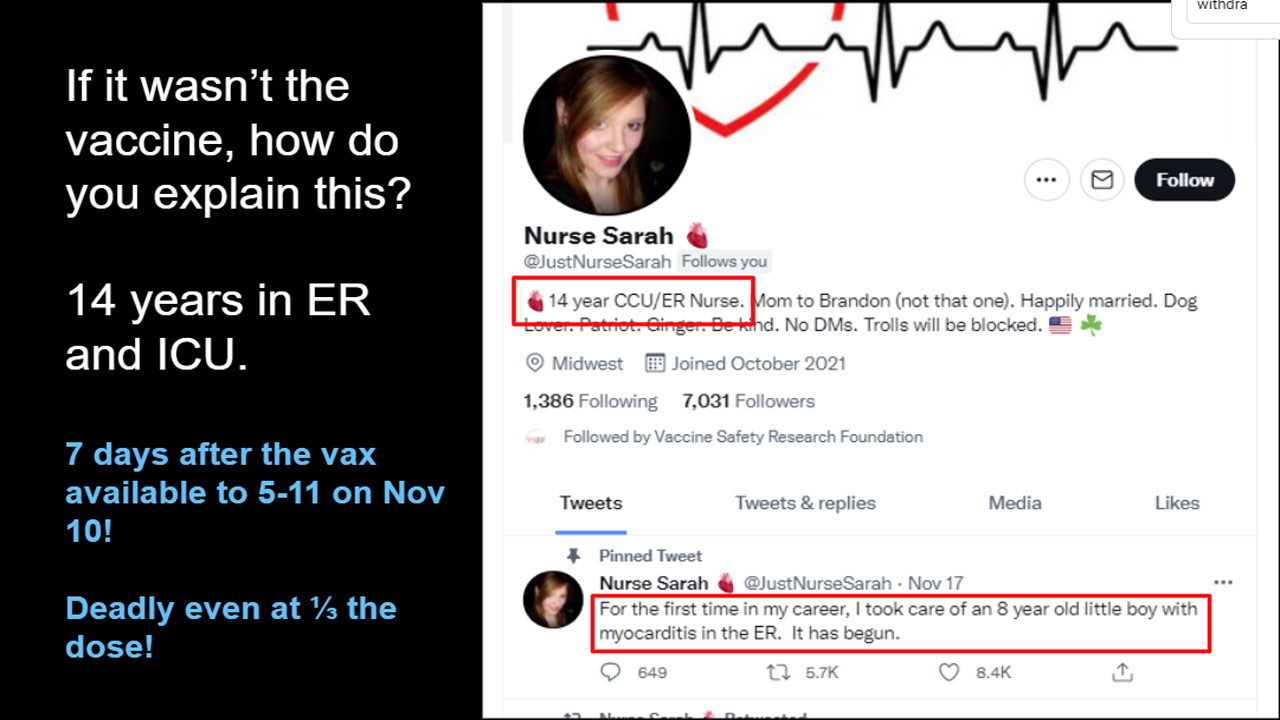 Recently, Dr. Toby Rogers did a risk-benefit analysis showing we’ll kill 117 kids for every kid we save from COVID with the vaccines aged 5 to 11.

The ratio doesn’t really change if they change the dose, e.g., to a third of the adult dose. It means fewer kids saved and fewer kids killed, but Toby estimates the ratio would be about the same. Whether it is 117 or 10, it doesn’t matter. We will kill a lot more kids than we will ever save with these vaccines.

We can’t show it is 117 to 1, but we can show for sure we are killing more kids than we are saving because kids that would have never died before are now dying

With COVID, only children with pretty severe health problems would die: we don’t know of a single kid, 5 to 11, who died from COVID who didn’t have some pretty serious health issues before they got COVID.

The vaccines rolled out for kids 5 to 11 starting on November 7. It is now just 12 days later and we are now killing perfectly healthy kids.

I just got this text:

These deaths simply are never ever going to report in the NY Times or on CNN. So you’re never going to hear about them except alternate media sources like this substack article. So only around 20,000 people will ever see these deaths.

Here’s another example. Another canary in the coal mine.

First time in her 14-year career: seeing an 8-year-old with myocarditis

I saw this Tweet from one of my followers. First time in her 14-year career she has ever seen an 8 year old child with myocarditis. Welcome to the “new normal.”

It’s happening for older kids too, not just the youngest. Here’s a video of Ernest Ramirez who lost his only child, his 16-year old son. I’ve talked to Ernest. His son had zero health issues. He got the first dose of Pfizer and just 5 days later his heart had doubled in size and he died of cardiac arrest while in the park. Dr. Peter McCullough, one of the nation’s most respected cardiologists reviewed the autopsy report and determined the vaccine killed the child. But the CDC simply ignores that because the medical examiner who did the autopsy (after a huge amount of pleading by the father) just said his son died of heart failure, not the vaccine.

Please click the image to watch the video, it’s only 2 minutes long:

This phenomenon isn’t just unique to the US. I got this from one of my UK readers about increased mortality among the young:

Here some analysis of excess mortality in UK teens as the 2nd vax jabs started:

Sleuthing from Down Under
Are the Vaccines Killing UK Teens?
There has been a bit of commentary about the risk Covid-19 poses to UK teens and the merit or otherwise of vaccinating them in light of this risk. The Telegraph recently reported Covid killed just six healthy children during the pandemic, while lockdowns have fuelled a timebomb of health disorders among the young, new data showed…

Once these kicked in excess mortality switched from negative to positive where it has stayed. Unlike unvaxed children.

A summary article confirms the shots make no sense for kids in the UK and points out this inconvenient truth about the myocarditis rates are higher after vaccination than before vaccination. The vaccines clearly made things worse, not better:

So how do we handle this? Our government will ignore all of this data push even harder to vaccinate every child in sight as soon as possible. In just 10 days, they’ve vaccinated 10% of our kids.

It’s really tragic. I’m 65 years old and I’ve never seen anything like this. It’s like mandating that your kids play Russian Roulette and if they survive, there is virtually no benefit since they weren’t going to die anyway.

All my calls to members of Congress I know go unreturned: Anna Eshoo, Ro Khanna, Bill Foster, John Garamendi, Jackie Speier, Zoe Lofgren, to name a few. None of them care enough to return any of my calls. They are all convinced the vaccines are safe and effective and will do nothing to stop this. They refuse to listen to anything unless it supports “narrative.” If you aren’t on board, you’re evil and will not be listened to.

The only people in Congress who can see the truth are Ron Johnson and Thomas Massie. Everyone else is pro-vaccine AFAIK.

The data clearly says the vaccines are unsafe, but nobody has time to look at the data themselves. If most of the doctors say it is safe, then it must be safe, no matter how many kids die.

So you’d think that THAT would raise a red flag? You’d be mistaken. The crack CDC team didn’t miss a beat and kept right on going as if nothing had happened. And if you can gloss over that one, then the others are easy to gloss over. And that’s exactly what they did.

The CDC and FDA have been so successful in spotting safety signals that they haven’t found a single serious adverse event so far (they admitted that DoD found myocarditis). So the fact that “acute cardiac failure” is elevated by more than 475X over the average year in VAERS doesn’t seem to generate a signal.

Here is a list of just the cardiac symptoms alone that are elevated by 200X normal or more.

Does that look like a safe vaccine to you? Of course not!

Does it matter? Of course not!

I made a short presentation that summarizes how dangerous the vaccines are to people of all ages, but nobody really wants to look at it:

The people on the advisory committees are never going to look at that presentation. They’d all prefer to keep their head in the sand to avoid the cognitive dissonance. They all believe COVID is more dangerous than the vaccine still. This isn’t based on actual numbers. It is based on their belief system. So even though we have evidence like this showing the vaccines are massively more dangerous than the virus,

it just does not “register” with people since it is contrary to what they were told. So it gets ignored as a “fabrication” or as an “anecdote.”

Not only that but I am labeled by the medical community as an “evil person” who is spreading information that is causing the death of people. This is an attempt at gaslighting, but it doesn’t work because I am focused solely on what the data is showing and not how other people choose to misinterpret that data.

I find it telling that nobody who is a prominent proponent of vaccination is willing to sit down and have a recorded discussion with my team of experts. As shown below, I even offered them a million dollars to come to have a discussion with us and nobody was interested.

Someday they will figure this out. I hope it is soon.

Please forward this article and promote it on your social networks. The big social networks will probably terminate your account(s) for doing this, but isn’t it worth it if you can save just one child’s life?