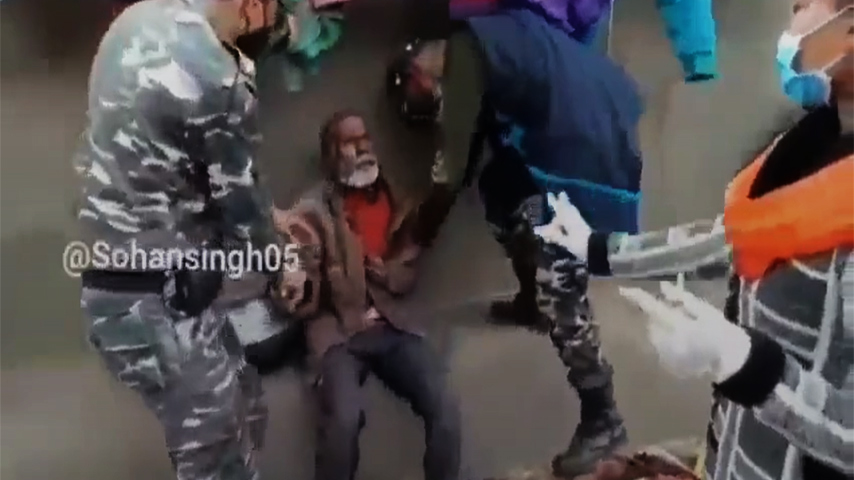 “A video has surfaced showing uniformed soldiers holding down and forcibly vaccinating a terrified elderly man in Jharkhand, India as he begs them not to.

“The same group is seen taking captive and forcibly injecting an elderly woman in another video. More footage of forced jabbing in India can be found in the comments of this [Telegram] post.

“Whatever happened to informed consent? How many times has this happened when there’s no camera recording?

“Wherever you are from, it’s easy to say “this could never happen here,” but it’s exactly what some in the ruling class want.

“For example: In August, the Washington Post called for private mercenaries in the U.S. to carry out forced Covid-19 vaccinations. In November, CNBC host Jim Cramer demanded that President Biden impose a nationwide vaccine mandate on every American enforced by the U.S. military,” a Telegram post by COVID19Up states.

The UK has similar problems in waiting. The Exposé has been documenting some of the British “celebrities” and journalists who have been on the wrong side of history, read HERE.

Posting the video on Twitter Dan Cohen said: “The Covidian biosecurity regime in action: Uniformed soldiers hold down and forcibly vaccinate a terrified elderly man in Jharkhand, India as he begs them not to.  How many times has this happened when there’s no camera recording?”

While Firefly2526 tweeted: “Forced vaccination of poor farmers in rural India now taking place.  The Government and others on social media say it is the right thing to do because they are illiterate and don’t understand why it’s needed.”

Although not in response to the videos above but it is relevant, Awaken India Movement (“AIM”) issued a press release yesterday relating to an order from the Meghalaya High Court that vaccination cannot be forced on individuals.

The Meghalaya High Court has said that forced vaccination will be considered as a violation of fundamental rights according to Article 19(1)(g) of the Indian Constitution also asks government to persuade people.

AIM’s Twitter thread continues by sharing images of their press release and stating: “Meghalaya State Unit to seek justice and dedicate its service to protect the peaceful, law-abiding citizens of Meghalaya from such organizations curtailing the Fundamental Rights and the Law of the land. Discrimination, social divide, medical apartheid and hatred must be stopped at the earliest.”

Nowhere in the world, not for anyone, should the right to freely given, informed consent be violated.  We are sovereign beings – wherever we live, whatever our means of making a living, whatever our age – every one of us.  And we all – military, police, civilians – together, have a moral obligation to speak out, resist, defy and not comply.

On 25 November 2021, the Indian Bar Association reported that murder charges were filed in India’s High Court against two billionaires – Bill Gates, and Adar Poonawalla – responsible for AstraZeneca’s Covid-19 injection, Covishield.  The unnamed defendants are “other Government officials and leaders.”

The charge is the murder of a 23-year-old man, Mr. Hitesh Kadve, who died as a result of the AstraZeneca injection.  Mr. Kadve had taken the “vaccine” due to requirements set by the railways, only double vaccinated individuals were able to travel, and the belief that the vaccine is completely safe.

On 31 January 2022, Vaccine Syndicate Kingpin and toxic philanthropist Bill Gates was once again slapped with a new case before Bombay High Court.

A case was filed with the Bombay High Court by the father of a deceased medical student, seeking Rs10,000 as compensation for the death of his daughter, who he claimed died due to the side effects of the Covid injection. “Government has admitted that Dr. Snehal Lunawat died due to side effects of Covishield vaccine,” the Indian Bar Association stated.

Petitioner Dilip Lunawat says that his daughter Dr. Lunawat, a senior lecturer at Nagpur Medical College, received the Covishield injection on 28 January 2021, and died a month later, on 1 March, from the injection’s negative effects.

Lunawat claims that his daughter was forced to take the vaccine because she was a health worker, reported Great Game India, Covishield vaccine maker Serum Institute of India, its partner Bill Gates, as well as state and federal authorities, are named as respondents in the petition

The number of “vaccinated” Covid deaths is significantly higher than that of the non-vaccinated, according to Haryana Health Department, India. The state health department’s preliminary data showed the mortality rate of immunized patients is five-fold that of non-vaccinated patients in this year’s fatalities, Great Game India reported last week.

Singh started by giving some background on Awakened India Movement (“AIM”), a movement that grew very organically.  She then discussed data from the Ministry of Health and Family Welfare “as of yesterday,” moving on to an update on legal proceedings, child vaccinations and adverse reaction reporting.  The update on India concluded with additional comments from Dr. Vadecha on legal proceedings.

In the video below, the 23-minute discussion regarding India starts at the beginning and ends at timestamp 23:04, after which other guests gave updates on the situation in Nepal and Austria.