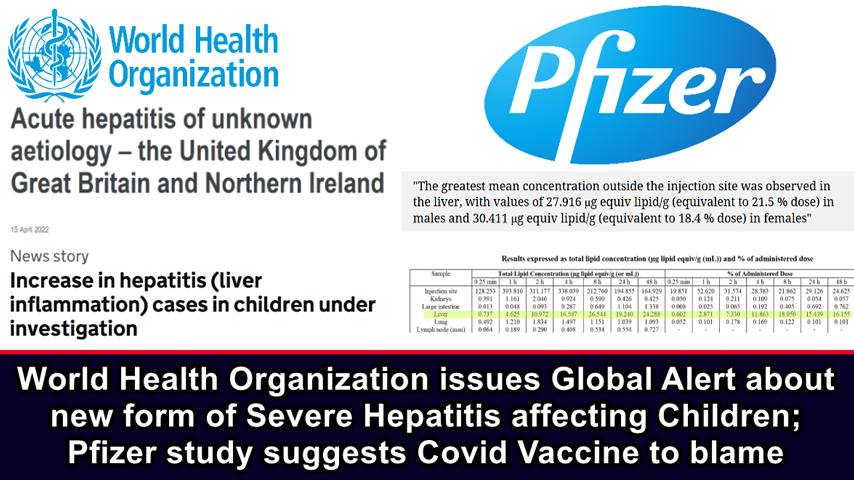 The World Health Organisation has issued a global alert about a new form of severe acute Hepatitis (inflammation of the liver) with an unknown cause affecting previously healthy children in the UK, Spain and Ireland.

This has prompted the UK Health Security Agency has announced that it has launched an urgent investigation.

With all three countries now offering and administering the Pfizer Covid-19 injection to children as young as 5; with the UK quietly granting the jab emergency use approval for use in children aged 5 to 11 in December 2021, this is the very first place they should be looking.

Because Pfizer’s own study proves that the mRNA jab accumulates in the liver causing hepatitis.

By The Expose and Guy Hatchard

On April 15, 2022, the World Health Organisation issued a global alert about a new form of severe acute Hepatitis with an unknown aetiology (cause) affecting previously healthy children in the UK over the last month. Cases have also been notified in Spain and Ireland. Tests have excluded all previously known Hepatitis viruses. 74 cases have been found so far, with more expected. The WHO alert said:

“The clinical syndrome in identified cases is of acute hepatitis with markedly elevated liver enzymes, often with jaundice, sometimes preceded by gastrointestinal symptoms, in children principally up to 10 years old. Some cases have required transfer to specialist children’s liver units and six children have undergone liver transplantation. As of 11 April, no death has been reported among these cases and one epidemiologically linked case has been detected.”

The announcement comes after the UK Health Security Agency (UKHSA) recently detected higher than usual rates of liver inflammation (hepatitis) in children. Similar cases are also being assessed in Scotland.

Hepatitis is a condition that affects the liver and may occur for a number of reasons, including several viral infections common in children. However, in the cases under investigation, the common viruses that cause hepatitis have not been detected.

The WHO rt discussed a possible role of the Covid-19 virus in the outbreak:

“Severe acute respiratory syndrome coronavirus type 2 (SARS-CoV-2) and/or adenovirus have been detected in several cases. The United Kingdom has recently observed an increase in adenovirus activity, which is co-circulating with SARS-CoV-2, though the role of these viruses in the pathogenesis (mechanism by which disease develops) is not yet clear….

“While some cases tested positive for SARS-CoV-2 and/or adenovirus, genetic characterization of viruses should be undertaken to determine any potential associations between cases.”

There are other possible causes of hepatitis.

These include autoimmune hepatitis and hepatitis that occurs as a secondary result of vaccines, medications, drugs, toxins, and alcohol.

Autoimmune hepatitis is a disease that occurs when your body makes antibodies against your liver tissue.

Autoimmune conditions are known to be associated with both Covid-19 viral infection and Covid-19 vaccination.

No investigation of Covid-19 vaccination as a possible complicating factor in the development of the new form of hepatitis has yet taken place, but it’s the very first place they should be looking.

It was assumed that the Covid-19 vaccine’s spike protein would remain at the injection site and last up to several weeks like other proteins produced in the body.

But as we all know assumptions make an ass out of u and me, and Pfizer’s own study shows this is not the case and that spike proteins circulate in the body following mRNA Covid-19 vaccination, and the highest concentration ends up in the liver.

The Japanese regulatory agency’s bio-distribution study of the Pfizer vaccine shows that the contents of the Covid-19 injection travel from the injection site, through the bloodstream, and end up in various organs such as the liver, spleen, adrenal glands, and ovaries for at least 48 hours after injection.

According to the researchers’ transient hepatic effects induced by LNP delivery systems have been reported previously [sources 1,2,3,4]

This was the driver for Aldén, et al from the Department of Clinical Sciences, Lund University, to examine the effect of BNT162b2 on a human liver cell line in vitro and investigate if BNT162b2 can be reverse transcribed into DNA through endogenous mechanisms. They published their paper in Current Issues of Molecular Biology.

The authors of the paper found that when the mRNA Pfizer vaccine enters the human liver cells, it triggers the cell’s DNA which is inside the nucleus, to increase the production of the LINE-1 gene expression to make mRNA.

The mRNA then leaves the nucleus and enters the cell’s cytoplasm, where it translates into LINE-1 protein. A segment of the protein called the open reading frame-1, or ORF-1, then goes back into the nucleus, where it attaches to the vaccine’s mRNA and reverse transcribes into spike DNA.

Through conducting the study they also found spike proteins expressed on the surface of the liver cells that researchers say may be targeted by the immune system and possibly cause autoimmune hepatitis, as “there [have] been case reports on individuals who developed autoimmune hepatitis after BNT162b2 vaccination.”

The authors were referring to the first reported case of a healthy 35-year-old female who developed autoimmune hepatitis a week after her first dose of the Pfizer COVID-19 vaccine. This led to a study being conducted in which the authors concluded there is a possibility that “spike-directed antibodies induced by vaccination may also trigger autoimmune conditions in predisposed individuals”.

The researchers Bril et al (2021) found that  “severe cases of SARS-CoV-2 infection are characterized by an auto-inflammatory dysregulation that contributes to tissue damage,” which the virus’s spike protein appears to be responsible for. They also reported that histology revealed the presence of eosinophils, which are more commonly seen with drug or toxin-induced liver injury, although can also be found in cases of autoimmune hepatitis.

They argued that “It is also possible that we could be in the presence of a vaccine-related drug-induced liver injury with features of autoimmune hepatitis [….] symptoms developed 6 days after vaccination, which instinctively appears as a short period of time. However, latency periods after vaccination of just days have been observed in prior reports”.

We wonder if Chris Whitty will be able to sleep at night once the UKHSA proves the Covid-19 injection is to blame for this sudden increase in hepatitis among children? After all, not a single child would have been given the Covid-19 injection if it were not for the Chief Medical Officer for England overruling the Joint Committee on Vaccination and Immunisation which had previously concluded the benefits do not outweigh the risks.