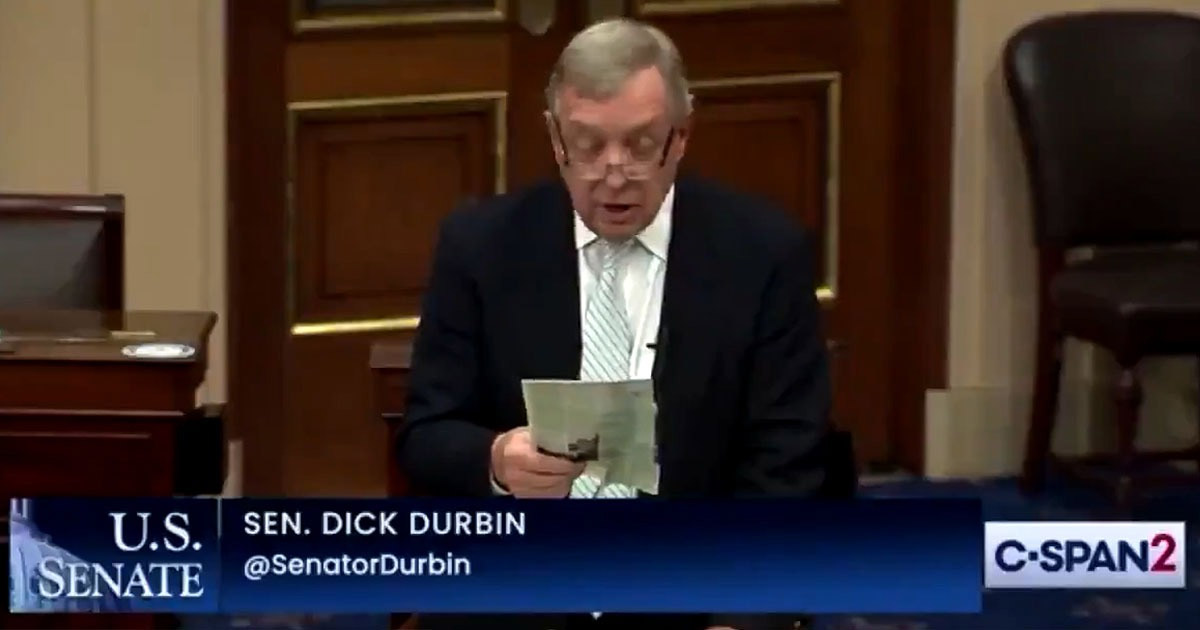 Sen. Dick Durbin (D-IL) appeared to either have a slip of the tongue or a complete misunderstanding of the facts during a rant on Monday about how much he dislikes Fox News hosts Tucker Carlson and Laura Ingraham. Durbin stated that “We have millions who’ve died across the world by this vaccine.”

“Sean Hannity himself said, ‘I believe in vaccinations. I do believe in science. Talk to your doctor,’ he said, ‘you don’t need to talk to people on radio and TV that aren’t doctors,’ which goes to the point of this message,” Durbin said. “There are two hosts of programs on Fox primetime that can only be characterized as anti-vax quacks. I’m referring, of course, to Tucker Carlson and Laura Ingraham.”

Durbin continued, “They have been spreading what I consider to be irresponsible information about vaccines across America, and about the effort of this nation to deal with ’em. Here’s the reality: we have millions who’ve died across the world by this vaccine, we may never have an accurate count. We have hundreds of thousands who have died in the United States.”

"Here's the reality. We have millions who've died across the world by this vaccine." pic.twitter.com/AZrrWPRis1

Durbin’s rant against Carlson comes just days after it was revealed that the Fox News host’s emails were spied upon by the National Security Agency, and then leaked to mainstream media journalists who alerted Carlson to the situation.

In response to Carlson’s reporting on the unethical surveillance of his communications, an MSNBC guest accused him of being “Anti-American”:

“They could have gone to the Attorney General, and Tucker Carlson could have joined them to say ‘You know what I’m concerned about here is not that there was incidental collection when I am calling a foreigner,’ including of course when you’re trying to reach out to Vladimir Putin, you can pretty much be sure that you’re going to be, uh, high risk of being intercepted,” Weissmann said.

Weismann continued, “He could’ve said, ‘look, there’s a First Amendment issue here, and we want to make sure that there are safeguards at the Department of Justice,’ but he didn’t take that route. He did, as you said, and as Frank pointed out, he wanted to use this really or his own purposes and to sow distrust, which is so anti-American.”

Many Democrat officials have pushed for the Biden regime to force Carlson’s show off the air.