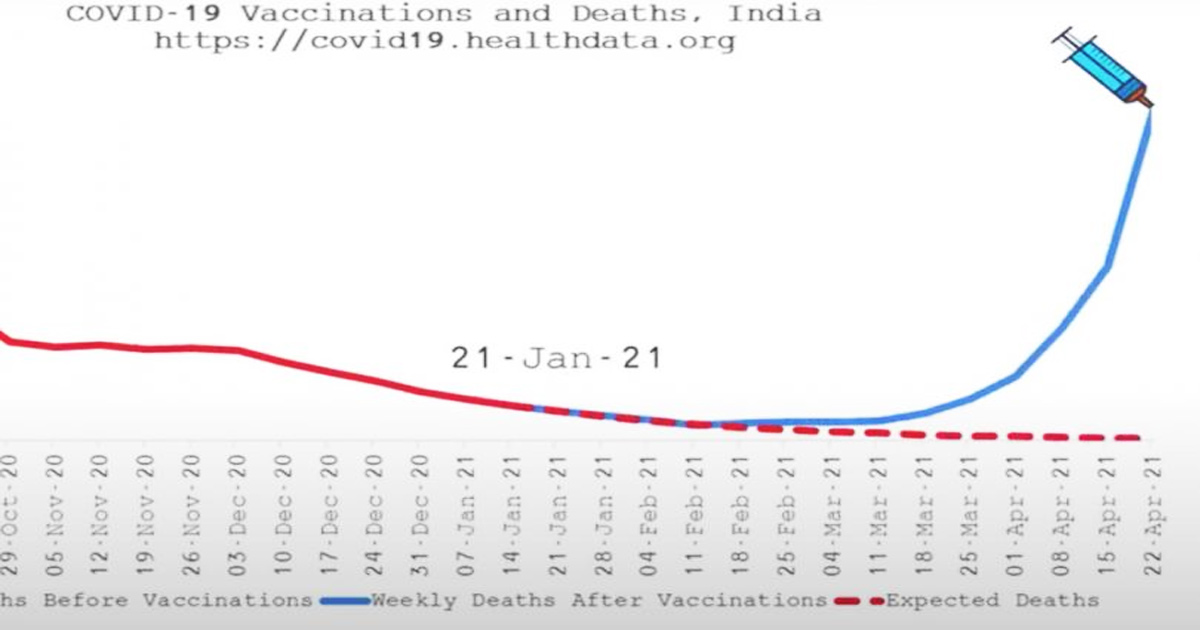 If experimental COVID-19 gene-therapy vaccines are ‘97% effective in reducing COVID mortality,’ why are spikes in COVID deaths following vaccination campaigns a general trend around the world?

A video published in May uses data from the Institute for Health Metrics and Evaluation at the University of Washington to illustrate the spikes in COVID deaths in numerous countries across the globe after the introduction of experimental COVID gene-therapy vaccination campaigns.

In his tweet introduction of the video, Smalley challenges the pharmaceutical assertion that “[v]accines are 97% effective in reducing COVID mortality,” responding “so we should expect to see some dramatic evidence of lower than expected deaths. Let’s take a look around the world.”


The video displays weekly COVID-19 deaths per country, before (red) and after (blue) experimental vaccination campaigns begin, along with a red dashed line of what would have been “expected deaths.”

Smalley tweets “‘Expected deaths’ are an extension of the distribution from the point vaccinations start. It is well known [n] that like most other natural processes, COVID mortality growth exponentially decays from time zero, i.e. its growth rate is always decelerating.”

Though he provides the equation on how he calculated “expected deaths,” Smalley claims that “you don’t really need to model the expectation to get a sense of what is going on.”

Examples include sharp increases in COVID deaths in England, Hungary, and India, as shown below.

The video fails to take into account any other data beyond the start date of vaccination in the respective countries and the number of deaths per 10,000 cases. For instance, India has less than 7 percent of the population fully vaccinated (which in April, when the video ends, was a smaller number still). Other mitigating factors, including severe lockdowns, are also not referenced. Finally, it remains unclear whether the deaths leading to a spike occurred among those who were vaccinated or not.

Two weeks ago Dr. Robert Malone, M.D., M.S., the inventor of the mRNA technology behind at least two of the experimental COVID-19 gene-therapy vaccines, expressed grave concern regarding widespread data, indicating that the most “vaccinated” countries in the world are experiencing surges in COVID-19 cases, while the least vaccinated nations are not.

Several days ago, the U.K.’s Chief Scientific Advisor, Sir Patrick Vallance, conveyed that only 60% of COVID hospitalizations were of unvaccinated individuals, indicating that approximately 40% were vaccinated. At the time, reports showed that 53.39% of the population was “fully vaccinated.”

This trend appears consistent with previous data, as well. According to a July 9 report issued by “Public Health England” on “variants of concern,” there were 92 deaths of unvaccinated people compared to 163 among the vaccinated (most of them fully vaccinated). While these numbers are minuscule in a country of 66 million people, a comparison between the two groups indicates that that the vaccinated have a rate of death nearly nine times higher than the unvaccinated.

A June 18 report from the same agency indicated the death rate from COVID is six times higher among those who were fully vaccinated for two weeks or longer than among those who never received a shot.

In Israel, it was reported on June 29 that the vaccine was failing and most new cases of COVID were among the vaccinated. Roughly 60% of the patients in serious conditions had been vaccinated and, according to Hebrew University researchers advising the government, around 90% of newly infected people over the age of 50 are fully vaccinated.

Indeed, this correlation has been noticeable since at least April when, in an interview, Yale University professor of epidemiology Dr. Harvey Risch stated that clinicians he had consulted “estimated that more than 60% of the new cases that they are treating — COVID cases — have been people who have been vaccinated.”

In one final tweet on his thread, Smalley wrote, “It has been brought to my attention that I omitted Cambodia [on the video]. It was not in the source data but I have tracked it down in another source” and he displayed that nation’s chart showing a virtual zero number of COVID deaths prior to the “vaccination” campaign, with deaths then spiking immediately after.

It has been brought to my attention that I omitted Cambodia. It was not in the source data but I have tracked it down in another source. pic.twitter.com/7Yn9tfPOE2