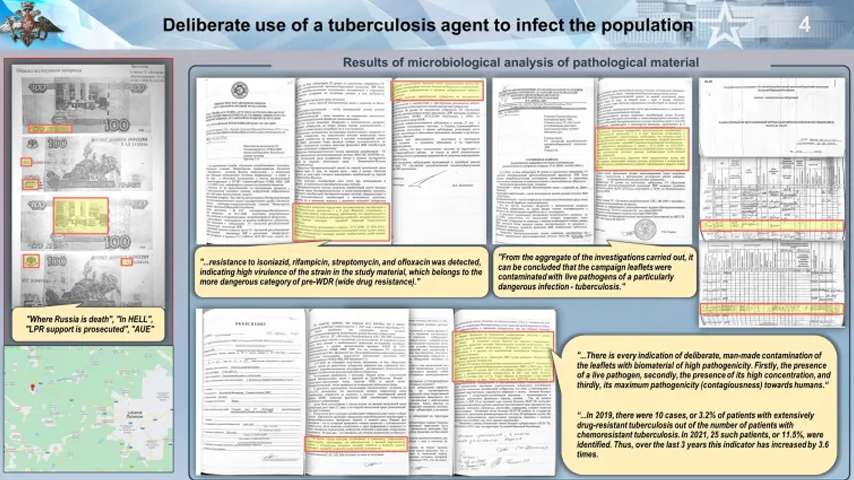 The Russian Defence Ministry continues to study materials on the implementation of military biological programs of the United States and its NATO allies on the territory of Ukraine. Explosive documents reveal how these Ukrainian Biolabs attempted to create controlled epidemics including coronavirus.

Russian military uncovered US-operated Biolabs in Ukraine while conducting a special operation in the nation. Earlier we published a list of Americans coordinating bioweapons research at Pentagon Biolabs in Ukraine

We have already mentioned Robert Pope, director of the Cooperative Threat Reduction Programme and author of the idea of the Central Depository of Highly Dangerous Microorganisms in Kiev.

In his statement of April 10, 2022, Pope said that “…there is no reason to claim that research related to the development of biological weapons is taking place in Ukraine…”. He previously claimed that “…the Americans did not find biological weapons when they first started working with Ukraine, and they still haven’t. In addition, Ukraine lacks the infrastructure to develop and produce biological weapons…”.

I would like to recall that the term “biological weapons” includes biological formulations that contain pathogenic micro-organisms and toxins, as well as the means of delivery and use of said formulations.

While the priority for Ukrainian healthcare is socially significant diseases such as HIV, poliomyelitis, measles and hepatitis, US customers are interested in a completely different nomenclature: cholera, tularemia, plague and hantaviruses.

As a result of the special military operation on the territory of Ukraine, facts of work with the specified pathogens, which are potential agents of biological weapons, have been revealed. At the same time, it was noted that Ukraine had sent a request to the manufacturing company regarding the possibility of equipping the Bayraktar drones with aerosol equipment.

In addition on March 9, three unmanned aerial vehicles equipped with 30-litre containers and equipment for spraying formulations were detected by Russian reconnaissance units in Kherson region. At the end of April, 10 more were found near Kakhovka.

All this information calls into question the statements of American experts.

We have previously provided a scheme for the US coordination of biological laboratories and research institutes in Ukraine. Its preliminary analysis suggests that Ukraine is essentially a testing ground for the development of biological weapons components and the testing of new samples of pharmaceuticals.

The Russian Ministry of Defence was able to clarify the said scheme.

Thus, through the US executive branch, a legislative framework for funding military biomedical research directly from the federal budget was formed. Funds were raised under state guarantees from NGOs controlled by the investment funds of the Clintons, Rockefellers, Soros and Biden.

Sensitive biolabs documents deleted by US Embassy exposed that it was former US President Barack Obama himself who authorized the construction of Biolabs in Ukraine for creating dangerous pathogens.

An investment firm directed by US President Joe Biden’s son Hunter Biden was a major financial supporter of Ukrainian Biolabs and a pandemic monitoring and response firm that engaged in identifying and alienating lethal pathogens in Ukrainian labs while obtaining funds from the Obama administration‘s Department of Defense.

The scheme involves major pharmaceutical companies, including Pfizer, Moderna, Merck and the US military-affiliated company Gilead. U.S. experts are working to test new medicines that circumvent international safety standards. As a result, Western companies are seriously reducing the cost of research programmes and gaining a significant competitive advantage.

The involvement of controlled nongovernmental and biotechnological organisations, and the increase in their revenues, allow the US leaders to generate additional campaign finance and hide its distribution.

In addition to US pharmaceutical companies and Pentagon contractors, Ukrainian state agencies are involved in military bioweapons activities, whose main tasks are to conceal illegal activities, conduct field and clinical trials and provide the necessary biomaterial.

Thus, the US Department of Defence, using a virtually internationally uncontrolled test site and the high-tech facilities of multinational companies, has greatly expanded its research capabilities, not only in the field of biological weapons but also in gaining knowledge about antibiotic resistance and the antibodies to specific diseases in populations in specific regions.

One of the objectives of the US-funded biological research laboratories in Ukraine was the development of bioweapons having the capability of targeting specific ethnic groups.

It should be noted that not only the US but also a number of its NATO allies are implementing their military-biological projects in Ukraine.

The German government has decided to launch a national biosafety programme independent of Washington, D.C., starting in 2013. Twelve countries, including Ukraine, are involved in the Programme.

On the German side, the programme involves the Institute for Armed Forces Microbiology (Munich), the Robert Koch Institute (Berlin), the Loeffler Institute (Greifswald) and the Nocht Institute for Tropical Medicine (Hamburg).

New documents reveal that between 2016 and 2019 alone, three and a half thousand blood serum samples of citizens living in 25 regions of Ukraine were taken by military epidemiologists from the Bundeswehr Microbiology Institute.

The involvement of institutions subordinate to the Bundeswehr confirms the military orientation of biological research carried out in Ukrainian laboratories and raises questions about the goals pursued by the German armed forces in collecting biomaterials of Ukrainian citizens.

The documents obtained also show the involvement of Poland in Ukrainian bio laboratories. The participation of the Polish Institute of Veterinary Medicine in research aimed at assessing the epidemiological threats and spread of the rabies virus in Ukraine has been confirmed. Characteristically, the research in question was carried out jointly with the US-based Battelle Institute, a key contractor for the Pentagon.

In addition, Polish funding for the Lvov Medical University, which includes a member of US military biology projects, the Institute of Epidemiology and Hygiene, has been documented. The organisation has been running a retraining programme for specialists with experience of working with dual-use materials and technologies since 2002.

The special military operation by Russian troops succeeded in obtaining additional information about bio-incidents in Ukraine.

For example, materials indicating the intentional use of a multidrug-resistant tuberculosis pathogen in 2020 to infect the population of the Slavyanoserbsky district of the LPR were examined.

The flyers, made in the form of counterfeit currency notes, were infected with the tuberculosis agent and distributed to minors in Stepovoe village. The organisers of this crime took into account the behaviour of children, who have a habit of “putting everything in their mouths” and taking food with unwashed hands.

The results of bacteriological studies have confirmed the resistance of the isolated bacteria to first- and second-line anti-TB drugs, meaning that the disease caused by them is much more difficult to treat and the cost of treatment is much higher.

According to the conclusion of the Lugansk Republican Sanitary and Epidemiological Station, “…the contamination of the notes was most likely carried out artificially, as the material contains extremely dangerous strains of the pathogen in concentrations capable of ensuring infection and development of the tuberculosis process…”.

In his conclusion, the chief doctor of the Lugansk Republican TB Dispensary also notes that “…there are all signs of deliberate, man-made contamination of the flyers with highly pathogenic biomaterial…”.

We previously reported on trials of potentially dangerous biological drugs on one of the least protected categories of people – patients of the Kharkov Regional Clinical Psychiatric Hospital No 3.

We have received new information revealing details of the Pentagon’s inhuman experiments on Ukrainian citizens in Psychiatric Hospital No 1 (Streleche village, Kharkov region). The main category of subjects was a group of male patients aged 40-60 years with a high stage of physical exhaustion.

In order to conceal their US affiliation, the biological research experts travelled via third countries. Here is a photograph of Florida native Linda Oporto, who was directly involved in these works.

In January 2022, the foreign nationals conducting the experiments were evacuated in an emergency and the equipment and drugs they were using were taken to western Ukraine.

Evidence of emergency destruction of documents confirming work with the US military establishment was obtained. A preliminary analysis of extant documentation indicates the use of Mariupol as a regional centre for cholera pathogen collection and certification. The selected strains were sent to the Public Health Centre in Kiev, which is responsible for the onward shipment of biomaterials to the United States. These activities have been carried out since 2014, as evidenced by the transfer of strains.

An act of destruction of the pathogen collection dated February 25, 2022, according to which cholera, tularemia and anthrax pathogens were handled there, was found in the sanitary and epidemiological laboratory.

Part of the collection of the veterinary laboratory was not destroyed in a hurry. In order to ensure safety and secure storage, 124 strains were exported by Russian specialists and their study was organised.

The presence in the collection of pathogens that are uncharacteristic of veterinary medicine, such as typhoid, paratyphoid fever and gas gangrene, is a cause for concern. This could indicate the laboratory’s misuse and involvement in a military biological programme.

We will continue to examine the full volume of material received from the Mariupol biolaboratories and will inform you about the results.

The Russian Ministry of Defence has information that provocations are being prepared to accuse the Russian Armed Forces of using weapons of mass destruction, followed by a “Syrian scenario” investigation to fabricate the necessary evidence and assign blame.

The high likelihood of such provocations is confirmed by requests from the Kiev administration for personal skin and respiratory protection equipment that provides protection against toxic chemicals and biological contaminating agents. The supply to Ukraine of organophosphorus poisoning antidotes raises concerns. In 2022 alone, more than 220,000 ampoules of atropine, as well as preparations for special treatment and disinfection, were delivered from the USA at the request of the Ukrainian Ministry of Health.

Thus, the information obtained confirms that the United States is implementing an offensive military-biological programme in Ukraine to study the possibility of forming controlled epidemics in specific territories.

The US invested upwards of $200 million in labs in Ukraine conducting dangerous biological activities. It has also been revealed that these biological facilities in Ukraine were performing research with bat coronavirus samples as well.

The special military operation of the Russian Armed Forces has crossed the US military-biological expansion in Ukraine and stopped criminal experiments on civilians.