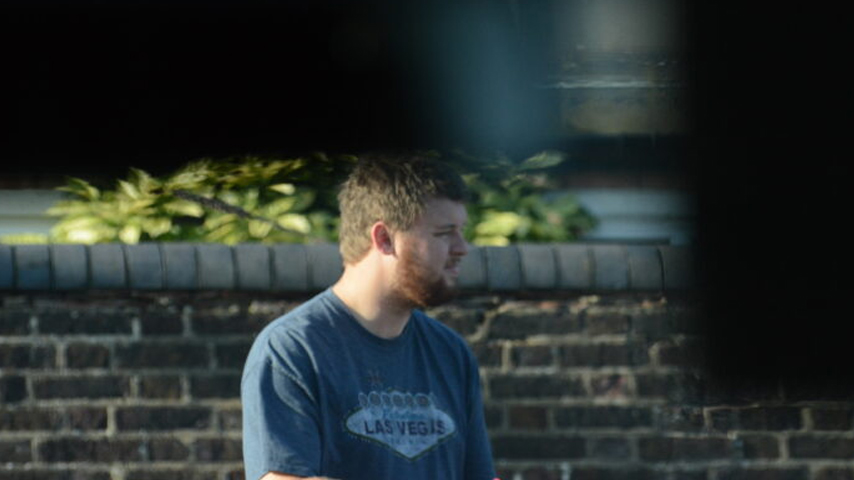 An undated image, taken by a police surveillance team, of Jordan Croft, a prolific online pedophile from Worthing, West Sussex, who was jailed on Nov. 10, 2022. (National Crime Agency)

A director of the National Crime Agency (NCA) has said there are between 550,000 and 800,000 pedophiles in Britain who pose a risk to children, and he said the threat from child sexual abusers continues to grow and “has not reached its peak yet.”

Chris Farrimond, the NCA’s director of threat leadership, revealed the figure during a briefing for journalists as Jordan Croft, one of the UK’s most “prolific and depraved” pedophiles, was jailed for offenses against 26 girls and women aged between 12 and 22.

Croft, 26, pleaded guilty to 65 offenses, including blackmail, causing or inciting a child to engage in sexual activity, making unwarranted demands for indecent images of children, and intentionally causing or inciting the sexual exploitation of a child.

He never met any of his victims but perpetrated his abuse entirely through mobile phone apps.

‘Misconception’ to Think Pedophiles Are Only on the Darkweb

Farrimond said: “Technology has brought massive benefits to the whole world … but it really assists offenders with a sexual interest in children. It plays a role in the escalation of abuse. It’s a misconception that sex offenders are only on the darkweb.”

On Friday a judge at Lewes Crown Court sentenced Croft, from Worthing, West Sussex, to 26 years in jail.

Croft, posing as a 14-year-old boy, sent out messages to 5,000 girls on one app and sifted through the replies, eventually entrapping several girls and young women.

He used apps like Yubo and Kik, and after persuading them to send over naked images and reveal their names and Facebook profiles, he revealed his true age and admitted he was a “catfish” and even referred to himself as a pedophile.

The NCA’s Martin Ludlow explained: “He would make them verbally sign sex slave contracts. He would say their body was his property and would make them send him whatever he wanted no matter how disgusting it was. They were terrified of being exposed to their friends and family.”

He said two of the girls were even persuaded to take photographs of 7-year-old girls and send them to Croft on the Telegram app.

Ludlow said, “Croft would tell his victims there was only one way to get out of the contract—have sex with him, or find another teenager to replace them.”

But he stayed in the shadows and never actually met any of his victims in person.

Croft Told His Victims Police Would Never Catch Him

Croft told them he had a degree in cyber security and could not be traced by law enforcement.

The NCA was first alerted by North Yorkshire Police in March 2019 and eventually identified Croft as the perpetrator and arrested him in August 2019.

In a victim impact statement read out in court, one of the girls said: “You told us the police would never find you, but, here we are today to prove you were never as untouchable as you thought. From now on people will know you as nothing more than a cruel, twisted, pathetic pedophile.”

Another said: “Jordan you won’t remember me or maybe you do? I’m one of the girls whose life you ruined and destroyed. I will never forgive you for the damage you have caused to my and others’ lives. You have scarred me mentally and physically.”

Last month the Independent Inquiry into Child Sex Abuse published its final report which presented a “horrifying picture” of abuse in England and Wales and recommended the introduction of a single database of pedophiles.

Is There Enough Research Into Causes of Pedophilia?

Professor Alexis Jay, who chaired the inquiry, was asked by The Epoch Times if there was enough research being done into the causes of pedophilia.

She said: “There is very little available on the subject on perpetrators and their motivations. We did commission primary research on this. We have learned a lot from our investigations and in part two of the report there is a section on common themes which includes perpetrator behavior which we feel will be useful to practitioners and others.”

Farrimond, asked by The Epoch Times about research into pedophilia, said: “The idea that people can be cured of this, I find that quite difficult. You find so many people who come out of prison and immediately do it again. What I can say is that we firmly believe the internet does play a part.”

He said the internet, and not necessarily the darkweb, provide places where “like-minded people meet up and convince each other that it’s normal and then escalate it.”

Farrimond said: “They will find children on the open web or on apps. Perfectly normal young teenage girls. But the messages very quickly get nasty.”

Russia Warns That Belarus Could Enter Conflict in Ukraine