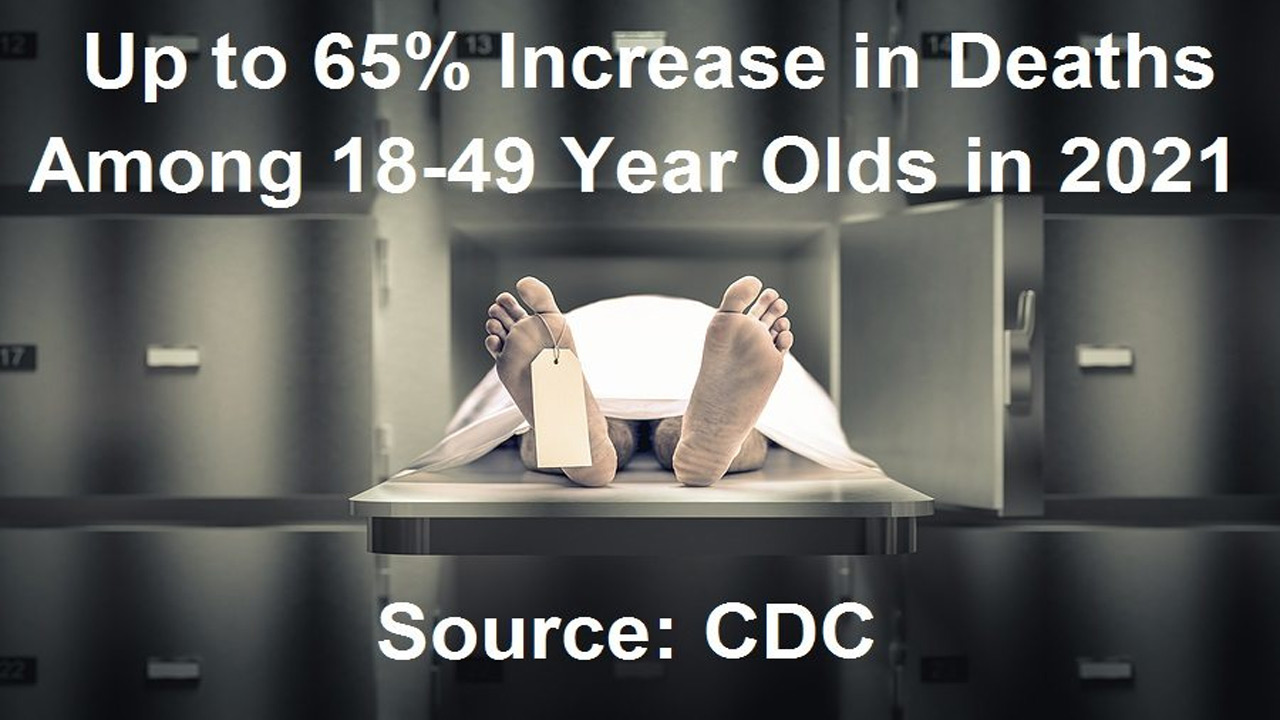 
Earlier this month (January 2022), Scott Davison, the CEO of OneAmerica, a $100 billion insurance company based out of Indiana, made headline news in Alternative Media when he announced that the death rate on life insurance claims skyrocketed an unprecedented 40% among those between the ages of 18 and 64 in 2021. See:

Crisis in America: Deaths Up 40% Among Those Aged 18-64 Based on Life Insurance Claims for 2021 After COVID-19 Vaccine Roll Outs

The usual corporate media “fact-checkers” quickly published articles trying to contain the damage, and I received a few emails from gullible people who don’t bother researching things for themselves and didn’t bother to fact check the “fact-checkers” to see if in fact they actually did debunk the story.

They didn’t, of course, but in typical fashion, they set up a straw man to knock down in most cases, by stating that Scott Davison never blamed the excess in deaths on the rollout of the COVID-19 shots in 2021.

But that hardly debunks the numbers from the life insurance industry that was truly a major news story, clearly showing that deaths dramatically increased in 2021, the year of the COVID-19 experimental “vaccine” rollout.

I did my own investigation to corroborate what he was reporting and examined the number of deaths the CDC was reporting through December 2020, before they revised their website and changed the total number of people who died in 2020, the year the pandemic scam started, which clearly showed that total deaths in 2020 were about the same as the previous two years and that all they basically did was eliminate most of the flu deaths and blame those on COVID-19.

The result of this investigation was that we saw about an additional 400,000 deaths in 2021, the year of the COVID-19 vaccine roll-out. See:

Since publishing that report, Petr Svab of the Epoch Times has also done an investigation on this issue, looking at death certificates from the CDC website of people between the age of 18 and 49 in 2021.

He examined the data by state, and he found that in some states the deaths in this age group had increased by as much as 65% compared to the same period in 2018 and 2019.

Here are the two articles he published that report this:

Nationwide Surge In Deaths Among People Aged 18-49: A State By State Overview

Deaths among people aged 18 to 49 increased more than 40 percent in the 12 months ending October 2021 compared to the same period in 2018–2019, before the COVID-19 pandemic, according to an analysis of death certificate data from the Centers for Disease Control and Prevention (CDC) by The Epoch Times.

The increase was notable across the country and in no state was COVID reported in more than 60 percent of the excess deaths. Some states experienced much steeper hikes than others.

Health departments in several states confirmed to The Epoch Times that they are looking into a steep surge in the mortality rate for people aged 18 to 49 in 2021—a majority of which are not linked to COVID-19.

Texas saw the 18 to 49 age mortality jump 61 percent, the second-highest increase in the country. Of that, less than 58 percent was attributed to COVID-19.

“Our Center of Health Statistics is looking at the data,” said Chris Van Deusen, the head of Media Relations at the Texas Department of State Health Services, via email. “We’ll get back with you.”

Florida, which saw an increase of 51 percent, 48 percent of that attributed to COVID-19, is also probing the matter.

“I am looking into it to see if there is some sort of correlation/causation,” said Jeremy Redfern, spokesman for the Florida Department of Health via email.

Petr Svab was careful to not link or blame the excess in deaths to the COVID-19 shots, probably to try and avoid the same “fact-checkers” trying to discredit his investigation.

But the correlation to the COVID-19 shots now is irrefutable, just from using the U.S. Government’s own data from the CDC, and also from the Vaccine Adverse Events Reporting System (VAERS).

This is a national catastrophe of the magnitude that this nation has never before faced, and the total collapse of the United States now seems inevitable.

EU Declares Energy Crisis ‘Emergency’, The US Will Not Be Immune