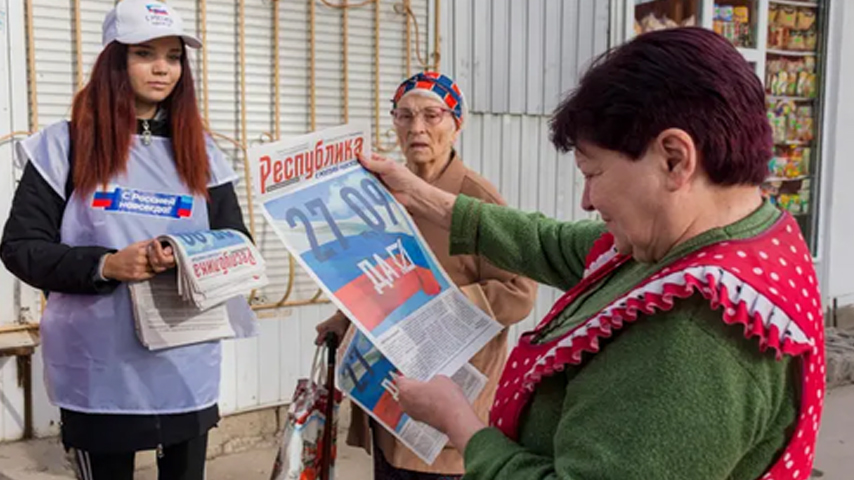 With four occupied regions of Ukraine currently in the midst of a five-day referendum on whether to join the Russian Federation, a Kremlin lawmaker told state media over the weekend that the territories are likely to be absorbed by Russia on September 30.

“Taking into account the preliminary results of the referendums and Russia’s readiness to acknowledge them, the accession of the territories is likely to take place as early as September 30,” the unnamed member of Russia’s State Duma said to TASS.

Voting is set to conclude Tuesday in Donestk, Luhansk and the Kherson and Zaporizhzhia regions, meaning as early as Wednesday or even Thursday announcements of results are likely to trickle out, paving the way for a potential Friday official declaration.

While Russian forces do not yet control the entirety of each of these territories, their annexation would constitute Ukraine losing almost 20% of its geographic territory.

Russian President Vladimir Putin might himself make the proclamation following the referendums, which Ukrainian leaders along with Washington have dismissed as a “sham” – saying they won’t be recognized. Russian media reports indicate:

The lawmaker said Russian President Vladimir Putin could take part in the procedure on September 30. “I don’t know if he will [participate], but he is likely to do so,” the MP said.

Given that on Saturday Foreign Minister Sergey Lavrov vowed new territories would be under Russia’s “full protection” – there is more than likely to be a major uptick in the intensity of fighting to follow the referenda results announcement in eastern Ukraine.

The areas that will be considered part of the Russian Federation after the referendum, as the areas in yellow will be seen as occupied Russian lands that will witness an escalation in the military action to liberate them. pic.twitter.com/LknOg3937f

Meanwhile, much has been made of both Putin’s and top national security official Dmitry Medvedev’s nuclear rhetoric over the past days. What’s being largely overlooked in Western media headlines are the Friday statements from Russian Deputy Foreign Minister Sergei Ryabkov, who stressed that Moscow’s nuclear doctrine hasn’t changed.

“We are not threatening anyone with nuclear weapons,” Ryabkov said. “The criteria for their use are outlined in Russia’s military doctrine.” He said that their use can only be contemplated if Russia is facing an “existential threat” and is forced to defend itself on the basis of a direct attack on its soil.

NZ publishes guide on how to identify, report ‘extremists’ unhappy with COVID measures

Bill Gates Reflects On Life: Holding ‘Jar Of Human Feces,’ Smelling ‘Latrine Odor,’ Drinking Poop Water Was All ‘Worth It’