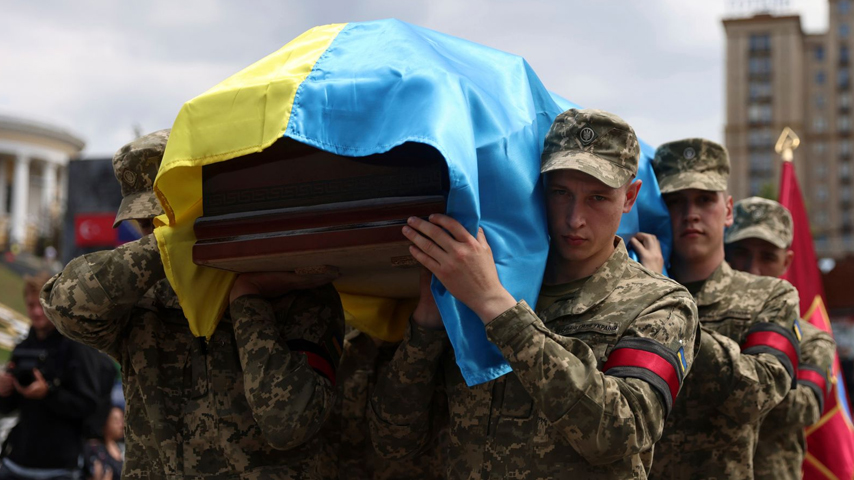 Allies have been warned to brace for a years-long war in Ukraine.

Both Prime Minister Boris Johnson and NATO Secretary General Jens Stoltenberg said the world needed to dig in and be prepared to offer its support long term.

In a stark interview with Germany’s Bild am Sonntag newspaper, the NATO chief said: “We must prepare for the fact that it could take years.

“We must not let up in supporting Ukraine. Even if the costs are high, not only for military support but also because of rising energy and food prices.”

And Mr. Johnson, who visited Kyiv on Friday, made similar comments in a piece for The Sunday Times, writing: “I am afraid that we need to steel ourselves for a long war, as Putin resorts to a campaign of attrition, trying to grind down Ukraine by sheer brutality.

“The UK and our friends must respond by ensuring that Ukraine has the strategic endurance to survive and eventually prevail.”

Describing time as “the vital factor”, Mr. Johnson added: “Everything will depend on whether Ukraine can strengthen its ability to defend its soil faster than Russia can renew its capacity to attack.

“Our task is to enlist time on Ukraine’s side.”

Speaking to reporters on Saturday, Mr. Johnson had stressed the need to avoid “Ukraine fatigue”.

He warned: “The worry that we have is that a bit of Ukraine fatigue is starting to set in around the world.

“It is important we show we are with them for the long haul and provide the strategic resilience that they need.”

Other key Ukraine developments:
• Severodonetsk, a prime target in Moscow’s offensive to seize full control of the eastern region of Luhansk, was again under heavy artillery and rocket fire
• Serhiy Gaidai, governor of Luhansk, spoke of “tough battles” in Metolkine, with Russia’s TASS news agency claiming many Ukrainian fighters had surrendered there
• Several Russian missiles reportedly hit a gasworks in the eastern Izyum district, and Russian rockets rained down on a suburb of Kharkiv, Ukraine’s second-largest city

The UK has also said it could send more troops to Estonia and lead a brigade there – further evidence of longer-term planning in the region.

The establishment of brigades – units with some 3,000 to 5,000 troops each – would significantly bolster NATO’s presence in the Baltics – three ex-Soviet republics that are seen as more vulnerable to Russian attack after Moscow’s invasion of Ukraine.

Meanwhile, in his nightly address to his nation, Ukrainian President Volodymyr Zelenskyy remained defiant. He said he had visited soldiers on the southern frontline in the Mykolaiv region, about 340 miles (550km) south of the capital Kyiv.

“I talked to our defenders – the military, the police, the National Guard,” he said. “Their mood is assured: they all do not doubt our victory. We will not give the south to anyone, and all that is ours we will take back.”