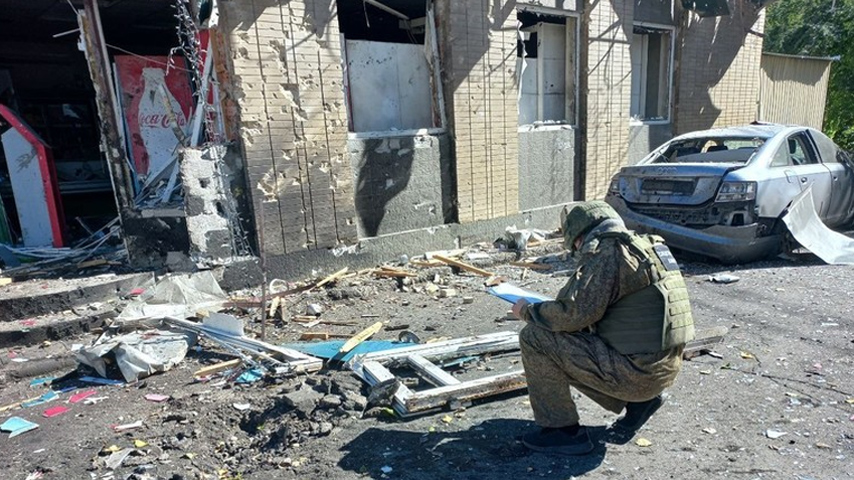 On Monday, Ukraine slaughtered 16 civilians, including two children, with 155mm NATO shells, according to the head of the Donetsk People’s Republic (DPR), Denis Pushilin. The projectiles hit two adjacent neighborhoods, decimating residential and commercial areas – including a market that had previously suffered fatal attacks.

Scenes of death are nothing new for residents and reporters here in Donetsk, which is intermittently the target of Ukrainian attacks, like the one that hit its central region on August 4, killing six people, including an 11-year-old ballerina, her grandmother, and her ballet teacher.

But the carnage on Monday was worse than anything I’ve seen in my months of reporting here. Chunks of flesh littered the street – part of a hand, a foot, an ear. Someone had put a dead man’s phone on his stomach. It was ringing, the cheery ringtone incongruous with his lifeless body and the scenes and stench of death around him.

Bodies were strewn around on the ground where the munition struck, another inside a shop.

A sight I will never forget: an older woman's body, only the upper half…

This is pure Ukrainian terrorism. No where is safe in Donetsk.

For most people, the concept of war is a distant one, and deaths are normalized by media reporting the numbers of victims and destroyed buildings – so most who hear of civilians being killed don’t really understand what a scene like this looks or smells like.

For the locals, it is also normalized, in its own way, after over eight years of Ukrainian attacks – a tragically grotesque kind of normality, where the post-bombing routine starts soon after the last explosions die down.

When I arrived at the scene, locals were already sweeping up glass shards and boarding windows, preparing to reopen their shops. Inspectors from the Russian Investigative Committee were on site collecting shrapnel and measuring the shell’s impact point, to determine the nature of the armament. When asked about what happened, they were careful to state that they could not say anything until the conclusion of their investigation.

An emergency vehicle arrived and workers began loading the bodies, or body parts, onto stretchers, clearing them away.

About 100 meters away, there was a gaping hole in the side of an apartment building. The shell had struck right where writing on the wall indicated the direction to the nearest basement, which was to be used as a bomb shelter. Doors to such stairways are generally permanently left open so that anyone caught up in shelling might have a chance to survive if they can make it to the door and basement in time.

Victims of another Ukrainian assault, which took place on Saturday, didn’t have that option. The center of Donetsk was hit by around ten bombs over the course of 30 minutes around noon. At least four civilians were killed, one of whom I saw still on the ground. Some minutes later, her body was taken away. One of the shells hit a car driving along Artema Street, setting it ablaze and killing two civilians. By the time I reached that site, the vehicle had burned out, and the dead taken away. Workers were already repaving the roads, sweeping debris and glass from sidewalks.

From earlier today, upon arriving back in Donetsk which was being bombed by Ukraine.

"According to the JCCC, this time AFU fired 13 shells of 155 mm caliber at the center of Donetsk."https://t.co/jBgh9oNLBW https://t.co/c2ik3Oa0Sd

On Thursday, again around noon, Ukraine again shelled central Donetsk, this time next to a busy market. The shelling left six people dead on the street and in a burned-out bus.

When Russian and Donbass voices state that Ukraine is killing Donbass civilians with Western weapons, the reply is silence, derision, or inversion of reality: claims that Russia is bombing Donbass – which any ordinary resident here would disprove easily, having been under Ukraine’s shelling for over eight years.

"…Fragments of NATO-style weapons, French, American, Spanish, etc. are found at shelling sites. However, the "civilized" world is not interested in where & how their military assistance to Ukraine is used.

We call on the West to pay attention to this!"#StopKillingDonbass

“After submitting the photos of the shrapnel I found on the spot to Adrien Bocquet, who is now a NATO weapons expert for the DPR’s representation in the JCCC (Joint Monitoring and Co-ordination Center on Ukraine’s War Crimes), he confirmed that they were American 155mm shells, some fired from Caesar guns and others from TRF1 guns.

The famous TRF1 guns that can fire (banned) 155mm cluster munitions, which I had mentioned in June, and which the Western press had assured that France had not supplied to Ukraine! Before learning at the beginning of September that Paris had indeed sold them to Kiev!”

Europeans in Germany, France and Italy recently held “#StopKillingDonbass” actions, denouncing the sale of Western weapons to Ukraine, and calling for it to end. It was rather fitting that the actions occurred the day after Ukraine bombed central Donetsk again.

"Actions for stopping the supply of weapons to Ukraine by the West have already taken place in Germany & Italy. The event is currently starting in France & we are expecting another action from Italy."#StopKillingDonbass pic.twitter.com/TMUgBkcKC4

These actions were followed by the release of a petition against arms supplies to Ukraine, which stated:

“Today, contrary to the fundamental principles set forth in Article 2 of the UN Charter, in particular, the principles of sovereign equality and the peaceful settlement of international disputes, our countries supply Ukraine with weapons that cause massive deaths and injuries of civilians in Donbass, including children.”

It concludes: “We demand an end to the financing of state terrorism and genocide against the people of Donbass, as well as the ongoing violations of the Geneva Conventions of 1949 and other acts of international humanitarian law since 2014.”

At this point, there is no safe region in Donetsk, nowhere is off-limits for Ukraine’s bombings, not maternity hospitals, nor busy markets. The issue does, however, appear to be off-limits for the reporting of Western corporate-owned media.