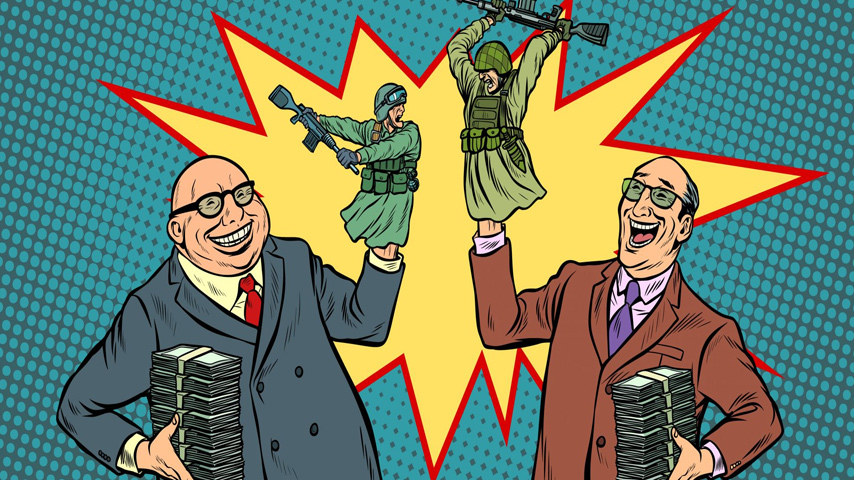 Can we trust “horizontal conflict” in the post-pandemic age?

The biggest mistake the elites made with the scamdemic was to let us see what good buddies they really are, because this instantly and inadvertently presented the 99.9% with a shocking and previously quite carefully hidden reality about the true nature of power and geopolitics.

Behind the facade of conflict, the elites have always shared a common bond of mutual interest. Kings (mostly) knew to honor the divinity of other kings even in defeat. Even when they killed each other they did it reluctantly and in the guise of “natural causes”. They knew their own populations were the real common enemies against which they knew to make common cause.

War was just another method of achieving this as well as gratifying some degree of personal pride.

Nothing much has changed in the modern era. And a great deal of the legacy media’s energy has long been devoted to helping to conceal the reality of the “big (supranational) club” that we ain’t in.

Until, that is, the recent huge error of judgment by the world’s leaders when they chose to abandon the carefully maintained “horizontal divisions” narrative in favor of some New Age, New Normal narrative of “international solidarity and co-operation to beat the virus”.

They were clearly going for some “Independence Day” type hug-fest psychic effect. Humanity falling into each other’s arms and deciding to work together in WHO-created mutual New Normal benevolence to defeat an invisible enemy that will, of course, never be defeated.

It did not go over as planned.

They just tried to sell it too hard too fast. And they blew it.

Gordon Brown reacted to a few hundred “COVID” deaths by saying we needed a world government (not yet, Gordon, too soon!).

Insane overkill on the “nothing will ever be the same” meme based on a few flu cases.

Those pix of people falling over backwards because “covid” in China.

All our lovely leaders are being seen at their international junkets ignoring their own mask rules (except for the flunkies) while forcing their populations into isolation and psychological torture.

All pushing their own magically produced untested toxic concoctions, all unctuously mouthing the same lies in a hundred different languages.

They goofed and made it just too obvious how closely in sync they are.

Sure they did also seed a few “alternative” deadly virus narratives that halfheartedly muddied the waters by blaming China, or maybe the US, but it wasn’t enough to counter the truly stunning images of international elite solidarity. Most particularly east-west solidarity.

Why were the Chinese elites spearheading this lie? Why were the Russian elites promoting it?

This was a big wake-up moment for many many people all over the world.

But for a large and growing minority, the very opposite began to happen.

This growing minority began realizing, not only that the pandemic was a massive lie, but also began to discern that most carefully hidden and most explosive truth — that the elites of the world – all the world – owe allegiance to each other above and beyond any trapping of national identity.

And that convincing us this is not true had heretofore been a huge part of retaining their power.

Faced with this awakening some people began to see they had no choice but to take control of their own destiny rather than wait for their governments to save them.

Small grassroots and spontaneous rebellions began sprouting. First, it was just a very few but then more and more people began challenging the pandemic lie. There were mass marches in cities across the globe and small local “stand in the park” protests. People were speaking out, reaching out. The truckers began their convoy.

Suddenly from a place of darkness, there was real hope. Not invested in some phony hero politician or some noisy celebrity populist, but in ourselves. Groups of ordinary people began realizing they could take back their lives.

And simultaneously the pandemic narrative began to falter.

Vaccine uptake was not meeting expectations. Even people who had one jab were getting reluctant to have another. Some of those who had once been compliant began to feel they’d had enough.

By autumn 2021 the New Normal – and, more importantly, the system promoting it – were actually in some trouble. The worst trouble they had known for a while.

And the elites began to recall the benefits of those good old tried and true horizontal conflict narratives.

But not because they wanted to distract you from that awkward realization about how chummy they really are behind the scenes!

It was because Russia suddenly got extra scary. And those Nazis in Ukraine suddenly became seriously worrying. And Israel got all worried about terrorists and Iran again. And Taiwan….yada yada.

And, obviously, those elites who can all agree to tell the same lies in the same words at the same time and produce the same “response” and promote the same “solutions” in lockstep over covid just can’t agree at all over anything else.

Because deep-seated ideological and strategical differences make it impossible.

It was all inevitable. Like death and taxes. Just something that wise people know had to happen.

And the fact it rescued the power structure from a dicey little moment is absolutely and totally a coincidence.

Yes, it did reinstate all the old conflict narratives and allow the media to make a lot of noise and distract people while the embarrassing “Independence Day co-operation” narrative snuck out the room.

And yes, it did rescue the New Normal and provide a lovely new reason for potential rationing, belt-tightening, forever shortages, travel restrictions, and all the other things Goldfinger Schwab and his billionaire supranational globalist chums really like.

Coincidental. Convenient. And no need to look any further.

I mean – would your favorite world leader really start or provoke a war just for convenience or profit? Would they really sacrifice lives just to benefit themselves?

Ok, maybe the Americans would, because Imperialism.

I mean sure, they are all equally happy to let their citizens get injected with untested toxic sludge, and sure they just worked with the West to joint-perpetrate an unprecedented global scam that may have killed or maimed millions.

And sure there is quite a lot to be gained from “winning” in Ukraine, aside from defeating Nazis. Fat rebuilding contracts. Access to a lot of resources.

And of course, the same convenient distraction equally serves West and East.

They are absolutely opposed and forced into conflict about everything else, and we need to take a side and support the good guys who are rooting for a better world.

The only alternative is to recognize that horizontal divisions benefit them not us. That neither side is good, or rooting for anything but their own advantage, and that fundamentally, as ever, the global 0.1% take care of their own interests while striving hard to deter and divert us from doing the same.

I suggest we stop being diverted and deterred, remember the lesson of 2020, and continue on the path of personal and collective awakening they are doing their best to lure us from.

A Recap Of The War In Ukraine – by Gonzalo Lira

Globalists are coming for your cars, cash and your body and they will not stop until you are turned into a digitized slave

The Next Step For The World Economic Forum