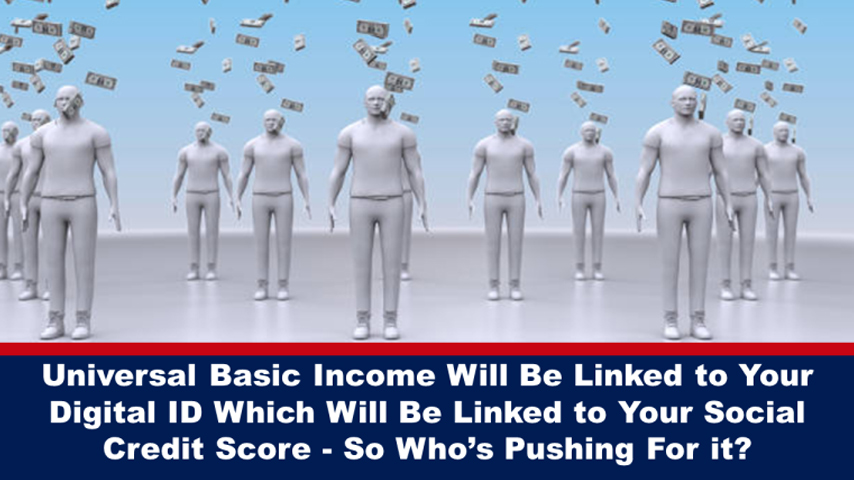 “A Universal Basic Income (UBI) is where a government pays all individuals a set salary regardless of their means. It guarantees a certain amount of money from the state without any requirement to work”

In this article, wrote ThreadsIrish, I am not going to dig deep into the economic reasons for it as I am not qualified enough to discuss it from that viewpoint. I will, however, be looking at the countries implementing it and who the people behind the scenes pushing for it are.

As you read the end of ThreadsIrish’s thread below, as well as the points ThreadIrish makes, it’s worth recalling John Calhoun’s Universe 25 experiment that we previously wrote about HERE, which showed that “utopia,” where all needs are met except space, led to societal collapse and population die-off to extinction.

What Has Universal Basic Income (UBI) To Do with Covid, War & Tony Blair?

In March 2022, The Irish Times called it ‘A welcome step’: Ireland’s first basic income scheme on the way’ where artists will get €250 a week in a pilot scheme but many want to see it extended to all.

Five months later and it had increased to €325 with The Irish Times called it a ‘seismic leap forward’ where some 2,000 artists will be guaranteed that weekly wage amount.

In Ireland it is being promoted as “money for nothing” and “no questions asked”. It is the exact same when furlough money was being paid.

When in the history of time has there ever been a “free lunch” (I’ll get to that later on in the article).

Even one of Ireland’s most well-known economists who writes for The Irish Times thinks it’s a good idea. In an article in 2017 David McWilliams floated the idea on his own blog.  This was the same guy who was a huge fan of furlough money in 2020.

McWilliams also was a Young Global Leader but has now graduated to become a member of the World Economic Forum (“WEF”).

Coincidentally, his own podcast on 2 March 2021 was titled ‘Building Back Better’.  Where have we come across that before?

Just across the Irish Sea in the UK, a document was published on the UK Parliament website in June 2022 called ‘Potential merits of a universal basic income‘.

They are obviously taking the idea of UBI very seriously and moving it along rapidly. The links to the UK parliament and ex UK parliamentarians don’t end there, however. That war-monger in chief and ex-PM of the UK, Tony Blair, is also involved as this tweet shows from Tascha Labs.

Def didn't see that coming when I posted tweet below 2 mos ago.

Blair is a WEF member, has been financed by the Bill & Melinda Gates Foundation for tens of millions and has been pushing a Digital ID for years.

It is this institute that will be involved in “public policy recommendations for universal basic income.”

We can now see how UBI jives with Central Bank Digital Currencies (“CBDC”). The dots are all being joined up.

Apparently “Brits support universal basic income by a 20-point margin” according to a poll in the New Statesman carried out in July 2022.

Of course, they do.

Wales though are a step ahead in the UBI stakes. In February, The Guardian reported:

“Young people leaving care will be offered £1600 a month for two years from the month after their 18th birthday. That works out at £19,200 per annum.”

A not insubstantial amount.

You won’t be surprised to hear that the World Economic Forum are big fans of UBI. They have been pushing it since 2016.

"We must attack poverty at its core." Is a universal basic income the answer? https://t.co/BXgstuWEoO #UBI pic.twitter.com/zBQZrYmg8k

In a video from 2021 at the height of the pandemic, they lauded it.

🔎 Learn more about how universal basic income is being used across the world: https://t.co/mKNkyjnkiS pic.twitter.com/2740DCWDx6

This city in California trialled universal basic income and found a surprising result. Stockton gave 125 People $500 a month with no requirement to work and study them for one year to see what happened.

After 12 months, the rate of full-time employment shot up 12% with participants working more, not less. They also reported feeling less anxious and depressed and spent more quality time with our kids.

Some helped family members pay for medical care. Others time to study. The money improved their social relationships enabling them to pay for luxuries like meals out.

The project hoped to show that poverty results from a lack of cash not character. Researchers say that payments let people set goals, make choices and take risks leading to career opportunities.

The report covers November 2018 to February 2020. A subsequent one will show how they fared during the pandemic. This isn’t the first experiment with universal basic income.

From 2017, Finland paid 20,000 unemployed people $560 a month. After two years recipients were happier, healthier and more confident during the pandemic many nations have given cash payments to the poorest people, including the US, India and Spain.

So, there you have it. UBI is the panacea for everything – happiness, time with family, medical care, and meals out. What more could you ask for? And apparently, the trial in Finland was a huge success according to the WEF. Except it wasn’t.

According to Business Insider: “One of the world’s largest basic-income trials, a 2-year program in Finland, was a major flop. Critics did claim the test was flawed from the outset.”

That is often the case though when trial results don’t go the way you want them to.

UBI all sounds well and good.  What’s not to like about an unconditional liveable income? It is always sold as eradicating poverty as well as being a social safety net.

Allegedly people will be able to spend more, save more and invest more.

Except it’s never unconditional. What we should be asking is “Cui Bono” or who stands to benefit? The simple answer is “The Elite.”

In 2017 Mark Zuckerberg publicly extolled the virtues of social safety net programs that give free money to citizens regardless of employment status, see CNBC’s report ‘Alaska gives residents free cash handouts – here’s what Mark Zuckerberg thinks everyone can learn from it’, 5 July 2017.

He also gave a commencement address at Harvard where he said: “We should explore ideas like universal basic income to give everyone a cushion to try new things.”

Except it won’t be used for “new things.”

Of course, the WEF backed WEF member Zuckerberg after his student address.

Why Mark Zuckerberg is advocating universal basic income in the #US https://t.co/NGUQBhHHZO pic.twitter.com/B5pPHSILKB

Zuckerberg isn’t the only one though. In 2021 Elon Musk said we need UBI because “in the future, physical work will be a choice.”

Read more: Elon Musk says we need universal basic income because ‘in the future, physical work will be a choice’, Business Insider, 20 August 2021

“Envisions a world wherein he and his AI-CEO peers become so immensely powerful that they run every non-AI company (employing people) out of business and every American worker to unemployment. So powerful that a percentage of OpenAI’s (and its peers’) income could bankroll UBI for every citizen of America.”

What Bill Gross had to say about socialism was particularly interesting and worrying, that we would have to “get used to it” with UBI.

I should have mentioned that Zuckerberg, Altman, Omidyar, Ng and Gross are all WEF members as are some of their respective companies, as is Kurzweil’s business partner of Singularity University, Peter Diamandis.

A common thread seems to be appearing among all the UBI proponents. AI will eliminate jobs and people will need UBI to survive. If that sounds like the agenda being pushed by the WEF and the Fourth Industrial Revolution, that’s because it is. This is what they said in 2017: read ‘Why we should all have a basic income’

Never ones to miss an opportunity, in April 2020 the WEF published an article ‘UBI is the answer to the inequalities exposed by COVID-19’. This was only a month after lockdowns started happening. Yet again they seemed to know what was going to take place.

Roll on 6 months and the WEF published an article called ‘Don’t fear AI. It will lead to long-term job growth‘.

At the same time, they published a report called ‘The Future of Jobs’. They claimed 85 million jobs will be eliminated by 2025 but 97 million will be created.

UBI would seem to be the perfect solution from the WEF perspective. They would much rather have people sitting at home, drinking beer, and watching Netflix (just like in the Covid lockdowns).

If we look back to the last 2.5 years, small businesses and entrepreneurs have been targeted during Covid lockdowns. Many lost their jobs.

Also, with the Ukraine/Russia conflict we are now seeing energy costs going through the roof. Naturally, this will be passed on to consumers so we will also see the price of food increasing.

Many people are struggling to make ends meet and put food on the table. This is where UBI comes in. In all likelihood, many people will be crying out for it and will do whatever it takes to receive it.

After the lockdowns and the plandemic hoax, businesses have and will continue to be destroyed through the climate/war hoax. They don’t want people earning their own money or employing other people. They want everyone reliant on a Universal Basic Income at the behest of the globalist government.

With rising energy prices and food prices about to jump to exorbitant levels what better time to bring in the UBI “free lunch” except there is no such thing as a “free lunch.”

So how would this work in reality? For the last 2 years, we have seen vaccines and vaccine passports being used in order to gain access to pubs, restaurants, etc. The exact same could be used for UBI.

Your civil liberties and rights will be tied to your social credit score. If you criticise the government, you won’t receive your UBI which will be in the form of a digital currency. Your bank account could be shut down by the press of a button.

This probably all sounds very far-fetched but you don’t have to look far to see that the closing down of bank accounts and people being arrested has already happened when truckers protested in Canada.

The future is not looking rosy unless people begin to understand the bigger picture being played out.