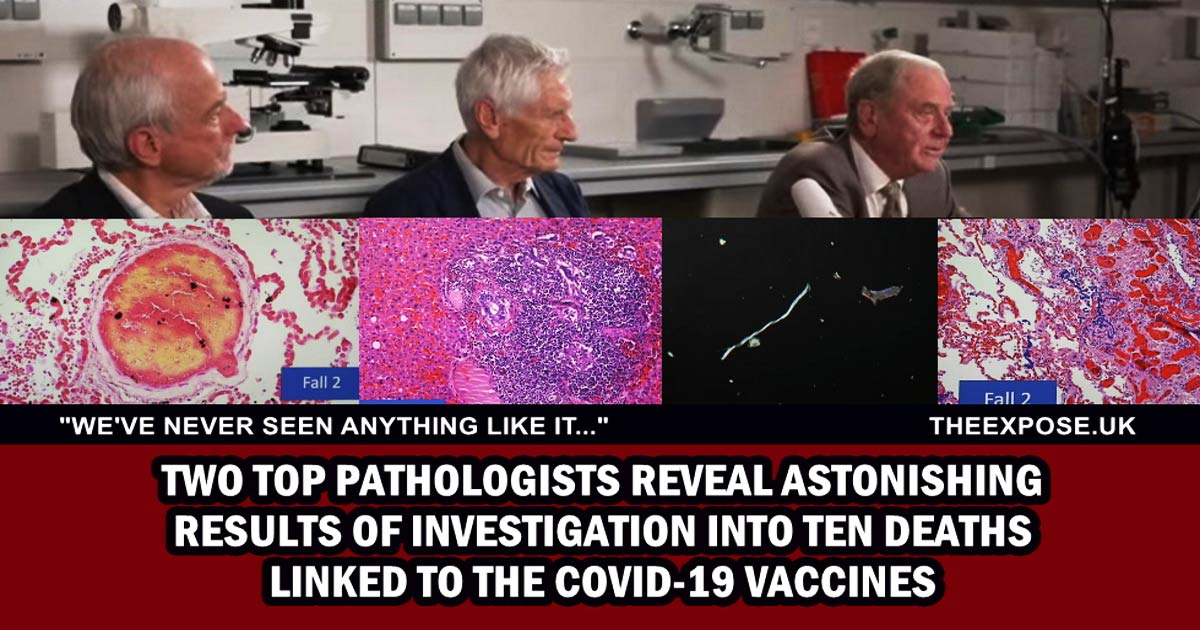 On Monday, September 20th, two top pathologists held a press conference in Germany to reveal their findings of an investigation into ten deaths linked to the Covid-19 vaccines, and what they revealed is shocking.

The press conference took place at the Institute of Pathology in Reutinglen, Germany; of which Professor Arne Burkhardt has been in charge for over eighteen years. Professor Burkhardt held the press conference alongside another experienced pathologist, Professor Walter Yang who has headed a private institute specializing in lung pathology for the past 35 years, among other appointments.

In collaboration with several other anonymous pathologists, Professor Arne Burkhardt and Professor Walter Yang investigated ten deaths that had occurred after the person had received the Covid-19 vaccine, and this is what they found…

However, what they found astonishing, is the similarities among the deaths that they concluded were linked to vaccination.

In three cases, they found rare autoimmune diseases; one of them was so rare that they only discovered it when they looked closely at the digitized image.

They were Hashimoto’s, autoimmune-triggered hypothyroidism; leukoclastic vasculitis, an inflammatory reaction in the capillaries that leads to skin bleeding; and Sjögren’s syndrome, an inflammation of the salivary and lacrimal glands.

Although deaths with suspected vaccine reactions are far from a representative sample of the population, three autoimmune diseases in a total of ten is a strikingly high rate.

The most striking finding, however, related to lymphocytes.

“The lymphocytes are running amok in all organs,” Professor Lang called it.

Not only did he show accumulations of lymphocytes in a wide variety of tissues, from the heart muscle to the kidney, liver, spleen, and uterus; he also showed images in which the tissue was massively attacked as a result, and a whole series of lymphocyte follicles, which are small, developing lymph nodes in completely the wrong place, for example in lung tissue.

It also showed detachments of endothelial cells – which are the smooth cells that form the wall of blood vessels – clumps of red blood cells that ultimately cause thrombosis, and giant cells that formed around trapped foreign bodies.

Lang said he had not seen anything like these clusters of lymphocytes in hundreds of thousands of pathological studies. Normally, other white blood cells, the granulocytes, are found in inflammations. In these cases, however, these are hardly found, and instead, there are masses of lymphocytes.

Further investigations are needed to determine which type of lymphocyte is involved in this process and how exactly it is triggered in order to prove a watertight connection with the vaccination; however, the histological examinations required for this would still take at least six months.

Still, he said, the results available so far are important enough to make known in advance in the form of this press conference.

Foreign bodies which they discovered in highly inflamed lung tissue –

“We’re missing out on 90 percent,” he said of the number of fatal vaccine reactions. That is not the fault of forensic scientists and pathologists, he said; after all, you can only see what you know, and forensic medicine can’t do histological examinations anyway. But it is urgently necessary to perform more autopsies on such cases. Unfortunately, he said, that is often hindered.

“Our task is to educate people about risks and side effects,” he said of the goal of his work. A task that would actually have to be fulfilled by institutions such as the Paul Ehrlich Institute in the case of experimental vaccines with emergency approval.

The findings of the experienced pathologists from an investigation into ten deaths following Covid-19 vaccination come after another pathologist, Professor Peter Schirmacer, director of the pathological institute of the University of Heidelberg in Germany, sounded the alarm over his findings following over forty autopsies of people who died within two weeks of having a Covid-19 vaccine.

Schirmacher stated that 30 to 40 percent of people he examined died from the vaccine and that in his opinion, the frequency of fatal consequences of vaccinations is “underestimated.”

Following his findings, Schirmacher called for more autopsies of vaccinated people to further determine whether the vaccines are linked to deaths. He has warned that the high number of unreported cases of vaccination deaths is partially due to the fact that “pathologists do not notice anything about most of the patients who die after and possible from a vaccination”.