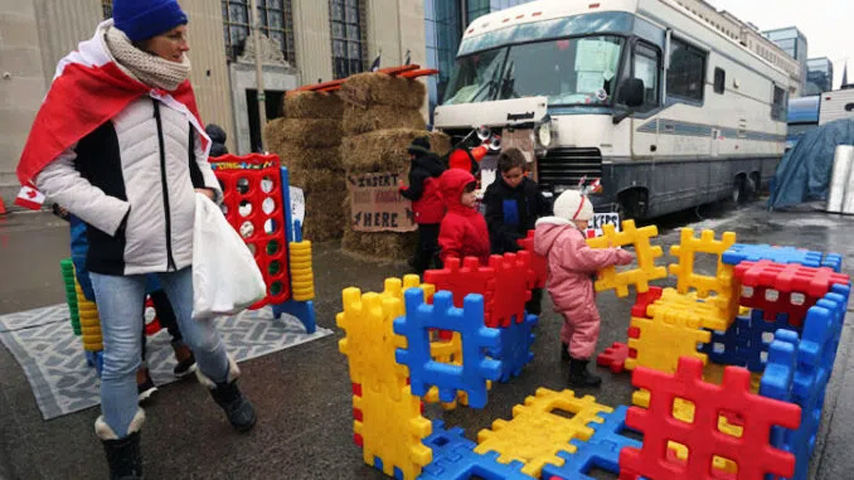 Justin Trudeau’s police is set to begin confiscating the children of trucker convoy protestors in Ottawa as punishment for defying the government.

According to CTV National News journalist Glen McGregor, Ottawa Police Deputy Chief Steve Bell provided an update on the protests Wednesday, saying around 25% of those involved have their families with them.

Bell claimed Ottawa Police was “swarmed” by protesters when they confiscated fuel canisters.

Bell also describes an incident yesterday in which OPS members were "swarmed" by protesters while trying to confiscate fuel cannisters. Investigation into the incident is pending.

Infowars.com reports: In reality, the demonstrators stood aside while police snagged their fuel, and chanted, “Shame! Shame! Shame!”

After a judge reportedly ordered the police to return the fuel they took, the footage was released showing officers doing just that.

Creating an excuse to send in the Children’s Aid Service (CAS), Bell claimed to be worried about the protesters’ children, citing the risk of “carbon monoxide fumes, cold, sanitation and noise levels.”

People bringing in water in gas cans is "a layer of logistical complexity [and] a level sophistication… of this group's ability to subvert police" as they try to intercept fuel deliveries.

At one point, Bell hinted at arrests being made, saying, “We’re going to have to do some cleanup in that area” where people eventually go home.

Also, missed this earlier: Bell says police will enforce the
"important court order" issued yesterday (over truck horn noise) but will do so at their discretion.

Bell said Ottawa Police are not seeking to take kids out of the trucks or away from their parents “at this stage,” but that they will continue to follow the recommendations of CAS.

“We’re not at the stage of looking to do any sort of enforcement activity around that,” he said of removing children from protesting families. “We just think it’s an important factor that complicates and makes this an even more challenging operation.”

As news of the government’s alleged concern for their children reached the protesters, many of them mocked the idea that the demonstration is dangerous in any way.

“Children are protected by their parents, OK? They’re fine. This is a perfectly peaceful protest,” demonstrator Jacob Verellen said. “This is wrong that we’re even suggesting taking children from their parents.”

When CBC reporter Joseph Tunney talked with some of the protesters about Deputy Chief Bell’s threats, one of the activists asked, “Are my children in danger for being in Ottawa? Are you telling me now that I should send my kids out of town because they’re going to get hurt? RCMP is gonna come in here and do what to my kids?”

A small sample of what it's like to be a journalist covering Ottawa right now. pic.twitter.com/UsvypVXM92

On Monday, Ottawa Police Chief Peter Sloly asked for about 1,800 more police personnel, both sworn and civilian, to “turn up the heat” on the protesters.

Now is the time for all those keyboard warrior leftists triggered at all the honking to sign up and become the jackbooted thugs they truly are.

Sloly’s request came as a whistleblower with connections in Canadian law enforcement warned riot police will round up all Ottawa demonstrators before Friday.

A provocateur trying to get protesters to “overrun the Parliament” has already been identified by demonstrators who were smart enough to tell him to “fuck off.”

A nurse taking part in the Ottawa demonstration recorded as she schooled mainstream media reporters working at the CBC for claiming the kids at the protest are in danger while ignoring the harm done to them by the government-mandated lockdowns.

The nurse, Kristen Nagle, asked the establishment stooges, “Do you know six-year-olds have told me they wanted to cut themselves and kill themselves? Kids want to die because of the last two years. Why aren’t you showing that?”

“And, now you’re talking about kids’ welfare safety?” she persisted. “Now you think kids should be taken from their parents from their trucks?”

Nagle continued to accuse the media members of stoking violence, as seen by the Antifa guy who hit three trucker protesters with his car and dividing Canadians.

Meanwhile, the truth about the Ottawa protest is that crime in the city has actually plummeted since the trucker occupation and demonstrators have created a safe, family-friendly environment equipped with food kitchens, bouncy castles and more.

"The crime rate went down 90% in Ottawa, there hasn't been a murder since we got here, there's no more hungry people on the streets"#OttawaOccupied pic.twitter.com/M8uxwmMsSr

As one protester explained, the group is not afraid of being arrested by the tyrannical government thugs.