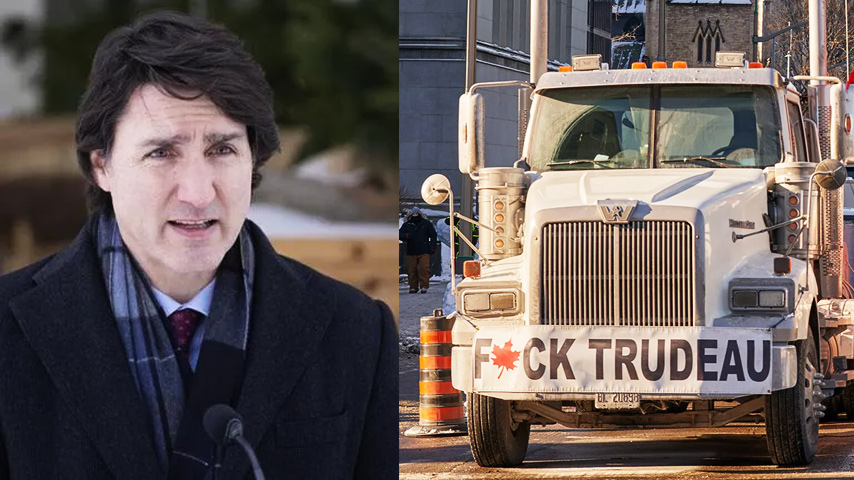 Justin Trudeau is gaining a lot of people who despise him wholeheartedly but that is not stopping him from imposing his tyrannical Covid measures. He is now threatening the truckers convoy with more drastic measures if they don’t stop. Here’s what he said:

Canadians have the right to protest, disagree with their government, and make their voices heard. We’ll always protect that right. But let’s be clear: They don’t have the right to blockade our economy, our democracy, or our fellow citizens’ daily lives. It has to stop.

Despite all this, there are no signs of truckers backing down. People are finding new ways to assist the freedom convoy. Canadian police is threatening people who provide gas and fuel for trucks with arrests and other meaningless charges.

So the people of the city have shown up carrying gas cans in protest.

Judge rules honking is now illegal in the Canadian capital

After a week of protests in Ottawa, trucks participating in the Freedom Convoy have been banned from honking. Ontario Superior Court Justice Hugh McLean granted a 10-day injunction to prevent truckers parked in the street from letting the sound of freedom permeate through the air within the downtown area of Ottawa.

Per Global News, the injunction is temporary because he needs to hear more evidence, but he has heard enough to rule against the protest movement that has paralyzed the parliamentary precinct.

Strange honking can cause harm but vaccines are completely safe.

Another video of police seizing fuel in Ottawa

Mark Carney is an Ottawa resident and former governor of the Bank of Canada and the Bank of England.

In our capital city, many people have been terrorized for more than a week. Women fleeing abuse have been harassed. Many elderly have been too afraid to venture outside their homes for groceries. Families have been deprived of sleep for days on end by the constant barrage of 100-decibel noise. Control over the city’s downtown core, which includes the Parliamentary Precinct, was ceded by the police and taken over by what the chair of the Police Services Board describes as an “insurrection.”

Canadians can be forgiven if they thought this would never happen in Ottawa.

“So proud of our Canadian police. To serve and protect. So glad they took that 80-year-old, 5-foot-nothing man off the streets. I feel so much safer now.”

Police Raid on Trucker Base Camp

Speaking to the Detroit Free Press, Gregg Ward, the president of Detroit-Windsor Truck Ferry said that the bridge closing is unprecedented and that the last time the bridge closed for a protest was in 1990

The Ambassador Bridge that connects Windsor, Ontario to Detroit, Michigan has been completely blockaded by a convoy of trucks protesting the COVID-19 vaccine mandates, which remains ongoing in Canada’s capital city of Ottawa.

Thousands of supporters have been kept away from the Coutts protest by RCMP and are staged 20km up the road in Milk River.

Farmers, in solidarity with the ongoing trucker protest taking place at the major border crossing between Alberta and the United States, have moved in with heavy equipment and tractors to completely obstruct the border with Montana.