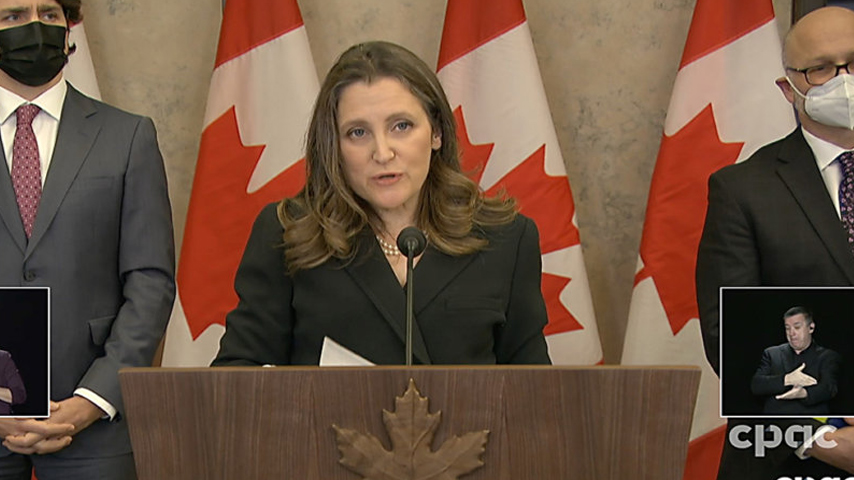 The so-called emergency measure enacted during the Freedom Convoy that required crowdfunding platforms to report large donations has now become permanent in Canada.

The measure was initially enacted under the Emergencies Act Trudeau invoked in response to the non-violent Freedom Convoy protest against draconian COVID policies, with Freeland explaining at the time that the measure was being deployed under the “Proceeds of Crime and Terrorist Financing Act.”

“We are making these changes because we know these platforms are being used to support illegal blockades and illegal activity which is damaging the Canadian economy,” Freeland told reporters in February when implementing the measure.

“What we are facing today is a threat to our democratic institutions, to our economy and to peace, order and good government in Canada,” added Freeland. “This is unacceptable. It cannot stand and it will not stand.”

At the time of the financial crackdown on the protesters, Trudeau’s government alleged that the Freedom Convoy was being funded by nefarious foreign entities and extremist groups, an allegation that was eventually dispelled by Barry MacKillop, the deputy director of FINTAC.

“It wasn’t cash that funded terrorism or was in any way money laundering,” MacKillop testified in late February.

“These were people around the world who were fed up with [COVID] and were upset and saw the demonstrations. I believe they just wanted to support the cause,” he continued.

Despite the impetus for the temporary invocation of the measure proving to be false, the cabinet wrote in a Regulatory Impact Analysis Statement that the “lack of oversight” with respect to crowdfunding platforms “presents a serious and immediate risk to the security of Canadians and to the Canadian economy,” and therefore the measure needed to become permanent.

“This risk was highlighted in early 2022 when illegal blockades took place across Canada that were financed in part through crowdfunding platforms and payment service providers,” explained the cabinet. “Allowing these gaps to continue represents a risk to the integrity and stability of the financial sector and the broader economy.”