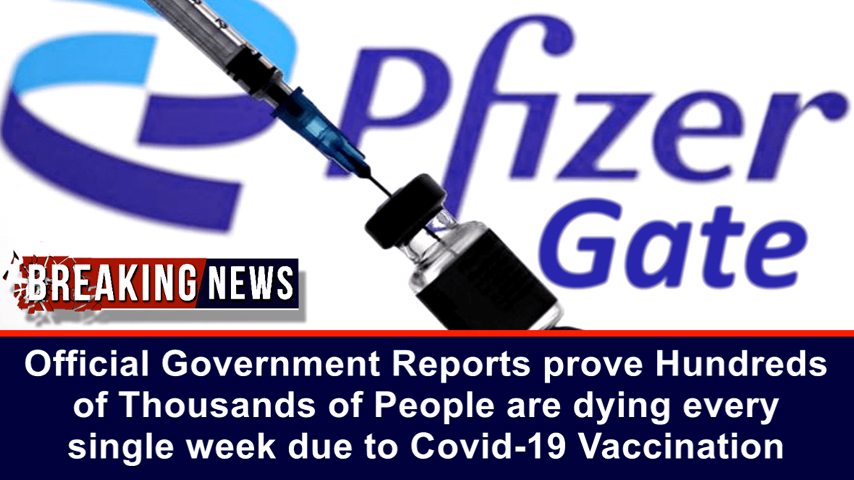 You were instructed to stay at home to protect the healthcare system. But while you did so, hospitals essentially had a holiday, and this is backed up by official data. You were told the answer to everyone’s prayers was to get the Covid-19 injection. But now that you have done so, the healthcare system is on the brink of collapse.

And official Government reports prove without a shadow of a doubt that it is all thanks to the Covid-19 vaccines.

Exhibit A: The Healthcare System is overwhelmed

Ambulances in England are taking almost an hour to reach patients who have had a suspected stroke or heart attack, more than three times the 18-minute maximum wait, the latest NHS data shows. When people call 999 they can no longer be confident that they will get the emergency care they need.

The following chart is taken from the UK Health Security Agency’s ‘Ambulance Syndromic Surveillance System – Week 30′ bulletin, and it shows the daily number of 999 calls requesting an ambulance due to suffering cardiac arrest in England vs the expected rate (black dotted line).

The daily number of calls has been way above average since at least August 2021.

The National Health Service (NHS) has also confirmed in response to a freedom of information request that ambulance call-outs relating to immediate care required for a debilitating condition affecting the heart nearly doubled in the whole of 2021 and are still on the rise further in 2022.

On the 25th April 2022, Duncan Husband sent a Freedom of Information (FOI) request to the West Midlands Ambulance Service University NHS Foundation Trust requesting to know the number of call-outs for patients with heart conditions per year, between 1st January 2017 and the present day.

The NHS responded on the 18th of May with a spreadsheet containing the requested information.

The following chart visualised the data made available in the spreadsheet –

ambulance call-ours for high conditions have been higher overall since January 2021, and have been increasing month on month. It was not until April 2021 that we saw a significant increase among people under the age of 30 though, and it again has increased month on month since then.

There was a significant increase in 2021 among all age groups, and unfortunately, things got even worse in the first few months of 2022.

The question is, why?

Exhibit B: Covid-19 Vaccination can damage the heart, that is a FACT

They claim it is rare, but they are lying. The fact their hand has been forced in admitting they can occur means they are much more common than the average person on the street would like to think.

A quietly published study conducted by the US Centers for Disease Control and Food and Drug Administration actually found that the risk of myocarditis following mRNA COVID vaccination is around 133x greater than the background risk in the population.

This means Covid vaccination increases the risk of suffering myocarditis by a shocking 13,200%.

Myocarditis is a condition that causes inflammation of the heart muscle and reduces the heart’s ability to pump blood and can cause rapid or abnormal heart rhythms.

Eventually, myocarditis weakens the heart so that the rest of the body doesn’t get enough blood. Clots can then form in the heart, leading to a stroke or heart attack. Other complications of the condition include sudden cardiac death.

There is no mild version of myocarditis, it is extremely serious due to the fact that the heart muscle is incapable of regenerating. Therefore, once the damage is done there is no rewinding the clock.

Is there any wonder the number of ambulance call-outs in England relating to conditions affecting the heart is at an all-time high?

Exhibit C: Hundreds of thousands of Excess Deaths are being recorded every week

The Office for National Statistics (ONS) publishes weekly figures on deaths registered in England and Wales. The most recent data shows deaths up to 29th July 2022.

The following chart, created by the ONS, shows the number of deaths per week compared to the five-year average –

As you can see from the above, from around May 2021 onwards, England and Wales recorded a huge amount of excess deaths that were not attributed to Covid-19 compared to the five-year average. It then appears that excess deaths dropped at the start of 2022.

But appearances can be deceiving, and the only reason they dropped is that the ONS decided to include the 2021 data in the 5-year-average. This makes it all the more concerning that excess deaths have been recorded every week since the end of April 2022 compared to the five-year average (2016 to 2019 + 2021).

The most recent week shows that there were 11,013 deaths in England and Wales, equating to 1,678 excess deaths against the five-year average. Only 810 of those deaths were attributed to Covid-19.

Most of Europe is also recording a significant amount of excess deaths, as can be seen in the following official chart compiled by Eurostat showing excess mortality across Europe in May 2022 –

The world is experiencing an extremely serious issue where tens to hundreds of thousands more people are dying than what is expected every single week.

But how can we prove these deaths are definitively due to Covid-19 vaccination? The answer lies in comparing the age-standardized mortality rates per 100,00 among the vaccinated and unvaccinated.

Exhibit D: Mortality Rates are lowest among the Unvaccinated in all age-groups

The following is indisputable evidence that the Covid-19 vaccines are deadly and killing people in the thousands.

The following charts show the monthly age-standardized mortality rates by vaccination status among each age group for Non-Covid-19 deaths in England between January and May 2022, the figures can be found in table 2 of a recently published dataset collated by the UK Government agency, the Office for National Statistics –

We also see a similar pattern among every single other age group.

These are age-standardized figures. There is no other conclusion that can be found for the fact mortality rates per 100,000 are the lowest among the unvaccinated other than that the Covid-19 injections are killing people.

But just in case that isn’t enough to finally open your eyes to his devastating fact, here are several more pieces of indisputable evidence to back up this fact.

Exhibit E: 1 in every 246 Vaccinated People died within 60 Days of Covid-19 Vaccination

The UK Government has revealed that 1 in every 246 people vaccinated against Covid-19 in England has died within 60 days of receiving a dose of the Covid-19 vaccine.

Here’s a chart showing the number of deaths within 60 days of Covid-19 vaccination in England between 1st Jan 2021 and 31st March 2022, according to the Office for National Statistics dataset –

The following table is taken from page 65 of the UK Health Security Agency’s week 27 ‘Weekly national Influenza and COVID-19 surveillance report’, and shows vaccine uptake in England by age –

Therefore, using simple maths, we find that 1 in every 246 vaccinated people has died within 60 days of Covid-19 Vaccination in England.

Exhibit F: COVID-19 Vaccines are at least a shocking 7,402% deadlier than all other Vaccines combined

The UK Medicine Regulator has confirmed that over a period of nineteen months the Covid-19 Vaccines have caused at least 5.5x as many deaths as all other available vaccines combined in the past 21 years. This means, that when compared side by side, the Covid-19 injections are a shocking 7,402% more deadly than every other vaccine available in the UK.

The Medicine and Healthcare product Regulatory Agency (MHRA) confirmed in response to a Freedom of Information request (FOI) that had received a grand total of 404 reported adverse reactions to all available vaccines (excluding the Covid-19 injections) associated with a fatal outcome between the 1st January 2001 and the 25th August 2021 – a time frame of 20 years and 8 months.

The MHRA also confirmed, separately, in their weekly Yellow Card report summary that they had received a grand total of 2,213 adverse reactions to the Covid-19 injections associated with a fatal outcome between January 2021 and July 2022, a period of 19 months –

Meaning, that there have officially been 5.5x as many deaths in just 19 months due to the Covid-19 vaccines than there have been due to every other available vaccine combined since the year 2001.

Twenty years and 8 months is a period that is 13.7 x longer than the nineteen-month period where the Covid-19 vaccines have been rolled out.

Therefore, the number of deaths reported to all other vaccines combined in the same time frame of nineteen months equates to 29.5 deaths.

This means the Covid-19 injections are proving to be a shocking 7,402% more deadly than every other vaccine available in the UK.

Exhibit G: Athlete Deaths are 1700% higher than expected since the COVID Vaccine roll-out

The number of athletes who have died since the beginning of 2021 has risen exponentially compared to the yearly number of deaths of athletes officially recorded between 1966 and 2004.

According to a scientific study conducted by the ‘Division of Pediatric Cardiology, University Hospital of Lausanne, Lausanne, Switzerland which was published in 2006, between the years 1966 and 2004 there were 1,101 sudden deaths among athletes under the age of 35.

Now, thanks to the GoodSciencing.com team, we have a comprehensive list of athletes who have collapsed and/or died since January 2021, a month after the first Covid-19 injection was administered to the general public.

Because it is such as long list we are not including it in this article so that the full list can be accessed in full here.

The following chart shows the number of recorded athlete collapses and deaths between January 2021 and April 2022, courtesy of the linked list above –

As you can see there has undoubtedly been a rise from January 2021 onwards, the question is whether this was ordinary and to be expected.

In all between Jan 21 and April 22, a total number of 673 athletes are known to have died. This number could, however, be much higher. So that’s 428 less than the number to have died between 1966 and 2004. The difference here though is that the 1,101 deaths occurred over 39 years, whereas 673 recent deaths have occurred over 16 months.

The yearly average number of deaths between 1966 and 2004 equates to 28. January 2022 saw 3 times as many athlete deaths as this previous annual average, as did March 2022. So this is obviously highly indicative of a problem.

The yearly average number of deaths between 1966 and 2004 equates to 28. January 2022 saw 3 times as many athlete deaths as this previous annual average, as did March 2022. So this is obviously highly indicative of a problem.

But the most damning evidence of all lies in 4 simple facts.

Fact No.1: Medicine Regulators have been forced to admit the Covid-19 vaccine can damage the heart.

Fact No.2: Record-breaking numbers of people are requesting an ambulance due to conditions affecting the heart.

Fact No.3: Hundreds of thousands of excess deaths are being recorded around the world on a weekly basis, but only a small minority can be attributed to Covid-19.

Fact No.4: Age-standardised mortality rates are lowest among the unvaccinated population in every single age group.

Therefore, official Government reports prove without a shadow of a doubt that hundreds of thousands of people are dying every single week due to the Covid-19 vaccination.