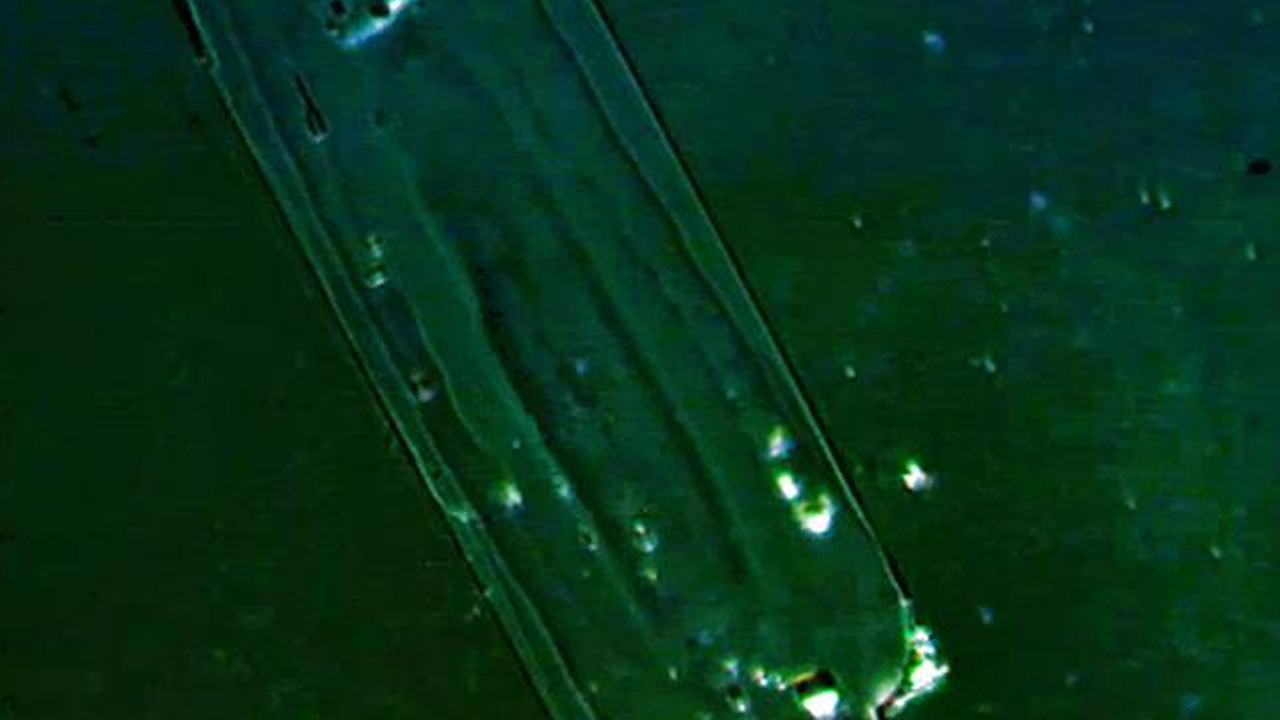 In a new special program for El Mirador del Gallo radio station, La Quinta Columna explained how the inoculated microtechnology would self-assemble inside the body to create more complex structures such as micro-routers, micro-rectennas, and other things.

As explained and proved by biostatistician Ricardo Delgado, certain qualities of electro-frequencies and radiation, in conjunction with biological processes, would make it possible to create a network within the body.

Ricardo Delgado: This is very important because what you’re seeing here are formations. At first, we might think that they’re salts. They’re also zig-zag-like formations. See? So, let’s say that these plates have chemical bonds that can be altered through a certain quality of frequencies of external electromagnetic fields. You see that the bottom part, the one that has a tooth like shaped structure, is separated from the other part you see above. 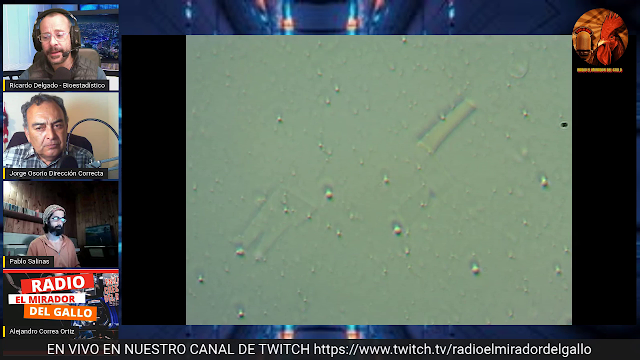 Well, notice how in the following video how these parts will appear joined together. That’s to say, they’re self-assembling. Later, we’ll be talking a little bit further about this self-assembling through mechanisms such as teslaphoresis. That is, through external electromagnetic fields. So, the frequency quality that’s being emitted right now is to proceed with the self-assembly of those circuits or microcircuits —that we’re going to see— inside the body, unfortunately.

And we’re also going to see the same in the following images. That is, when this material is injected, let’s say, that the parts of the puzzle are separated. And once inside the body, through by action mechanisms of the organism itself, and the surrounding electromagnetic radiation in the environment, the pieces join together Self-assembly is the term. And more and more complex structures gradually appear. Let’s say that they’re certain parts of a micro-router or a micro-rectenna.  And these are, as I say, self-assembling to form a more complex artificial structure. Let’s continue.

And now you’re going to see how the parts are already joined together. I saw it in real-time, but I wasn’t recording it. However, now you’re going to see how the bottom part joins to the other. In fact, it’s already getting a little bit closer there. It joins exactly with to the inferior part of the other structure. It goes zig-zagging. It’s always… Here they appear already joined. 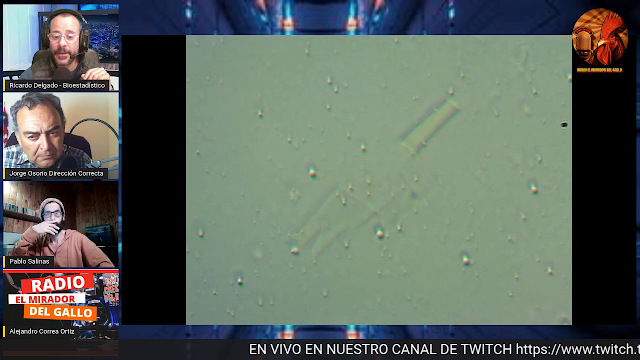 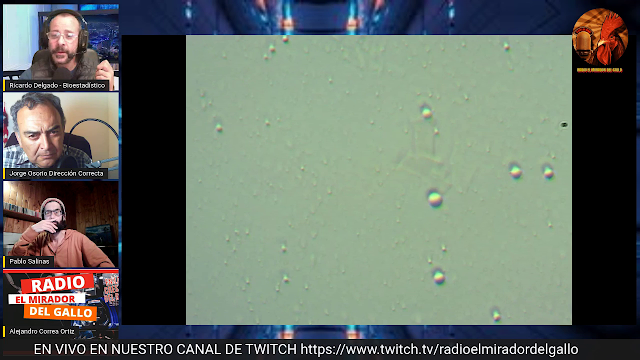 You see them, don’t you? Well, in the end, you’ll see the evolution after some days have passed and after the sample has been subjected to both electromagnetic and UV radiation. Here they have already joined. See? In principle, as everything is already… What we see here it’s another thing. 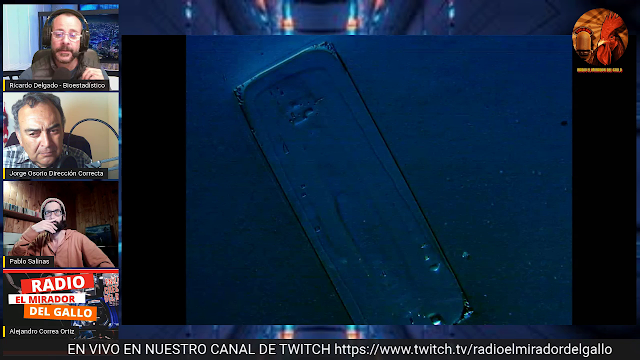 As the hydrogel has gained some consistency, well… That is, while the hydrogel hasn’t evaporated yet, the details of the surface of these plates aren’t visible. This is, practically, what’s beginning to look like a circuit as we know it in the field of microelectronics. Let’s continue. Now we’ll go down a little bit in the image. It even appears a little bit cropped at the bottom. 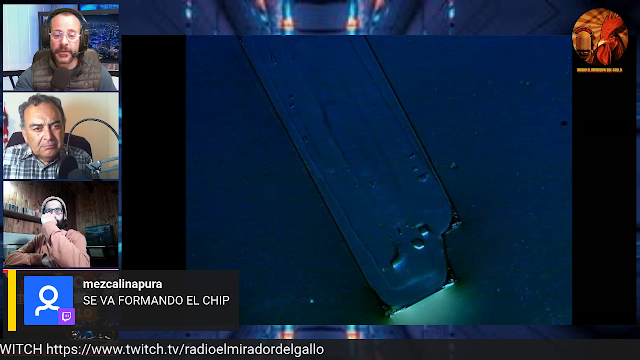 We have identified this in the scientific literature. Don’t forget the image with the beak cropped corner. Also, it matches the size described in the scientific literature. That’s about 1200 magnification. A micron would be one-thousandth of a millimeter. In the literature, we’re seeing some structures of about 3 or 4 micrometers wide at least. So, we’re talking about 1200 magnification. Here we see about 50, 60, or 70 microns. That’s how wide it is. And about 120 microns in length. Well, that can be easily estimated.

Then, next, you’re going to see, in addition, an image that we’re going to show right now. I have put it after this so that you can see that in the scientific literature, these materials are described. I have “played” a bit with different light filters and a little bit with the condenser to give more relief or definition to what can be seen. 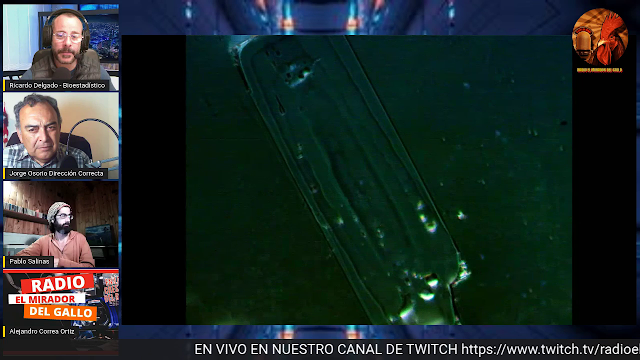 We have talked to, at least, 10 engineers. And all, exhaustively all of them, confirm that, indeed, it’s circuitry or a micro-scale circuit, in that case. 50 microns. Let’s see, a little bit further on. Okay. Here you see this taken from the scientific literature. Below, you can see a perfect plate, see? And above, in light brown, there’s a plate with that shape that belongs to microtechnology. And it has two graphene peaks. The same peaks as those determined by Dr. Campra. 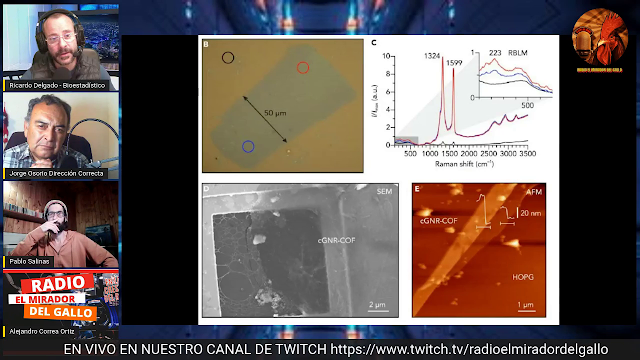 These structures have in the lower-left base something that resembles a cut off corner. That is, it’s exactly the same as the one we have located in the Pfizer vaccine. If you see, there’s the cut-off. Let’s say, there’s this circuit. This base has caught our attention. But we’re identifying all the structures. All of them. Let’s continue a little bit. And now, more and more complex structures are appearing as the days go by. Okay? This is going to look a lot better. Here it looks much better. It’s been enlarged. 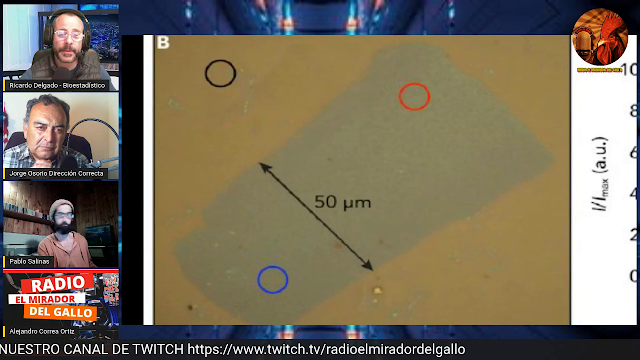 And we see that the corner below is missing a fragment, just as we’ve seen in the plate. Here, as I say, the circuit tracks are being formed. And some of the components can be seen. This structure corresponds quite closely to the plate described in literature (the one we saw in the below part).

Here, as I say, more and more of them are forming. And they’re more easily appreciated each time. 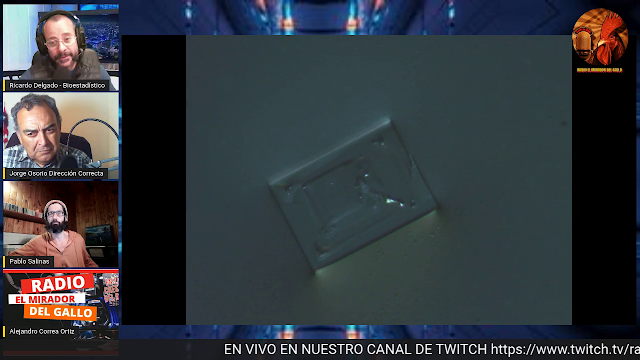 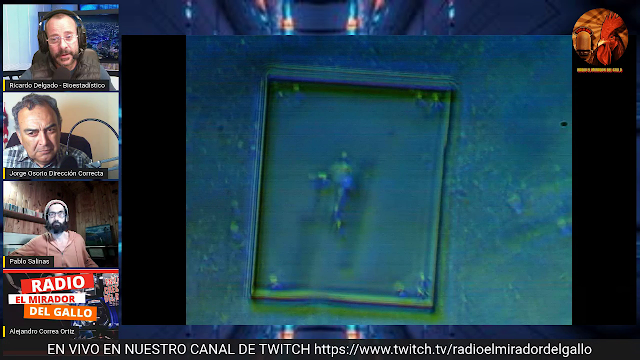 That corresponds to the joint of several pieces by certain chemical bonds. And those covalent bonds were given, precisely, by that external radiation, by some quality of electromagnetic frequency.

The truth is that we’re looking at a science that’s a few years old. What happens is that this all is very new for us. And this requires a lot of study and assimilation since it’s technology. A nanotechnology-microtechnology-biotechnology that has been hidden from the entire civil society. Especially now that it’s being inoculated. Here it looks even a little bit better. It’s very reminiscent of a motherboard. A computer motherboard. 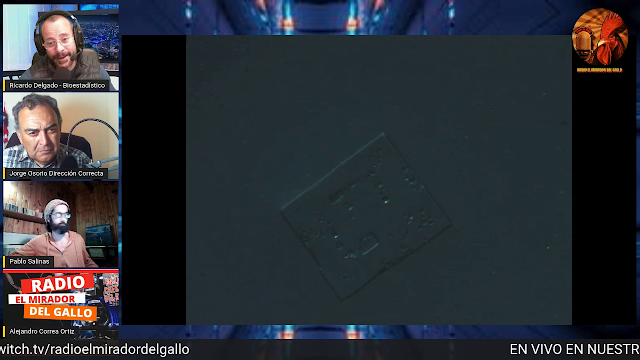 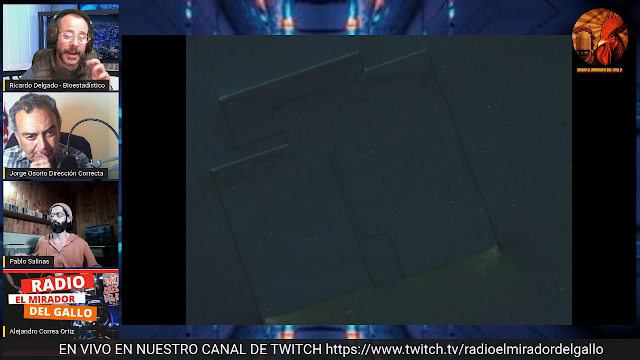 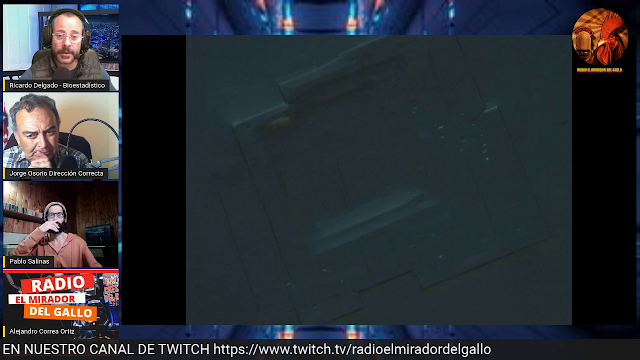 What we see here is what’s formed on the last day of observation. By then, the components and the circuitry could be seen a lot better. 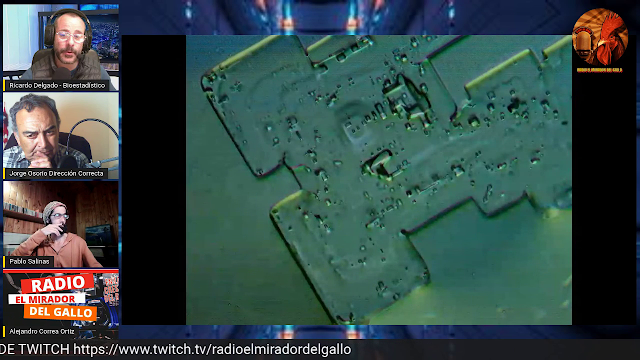