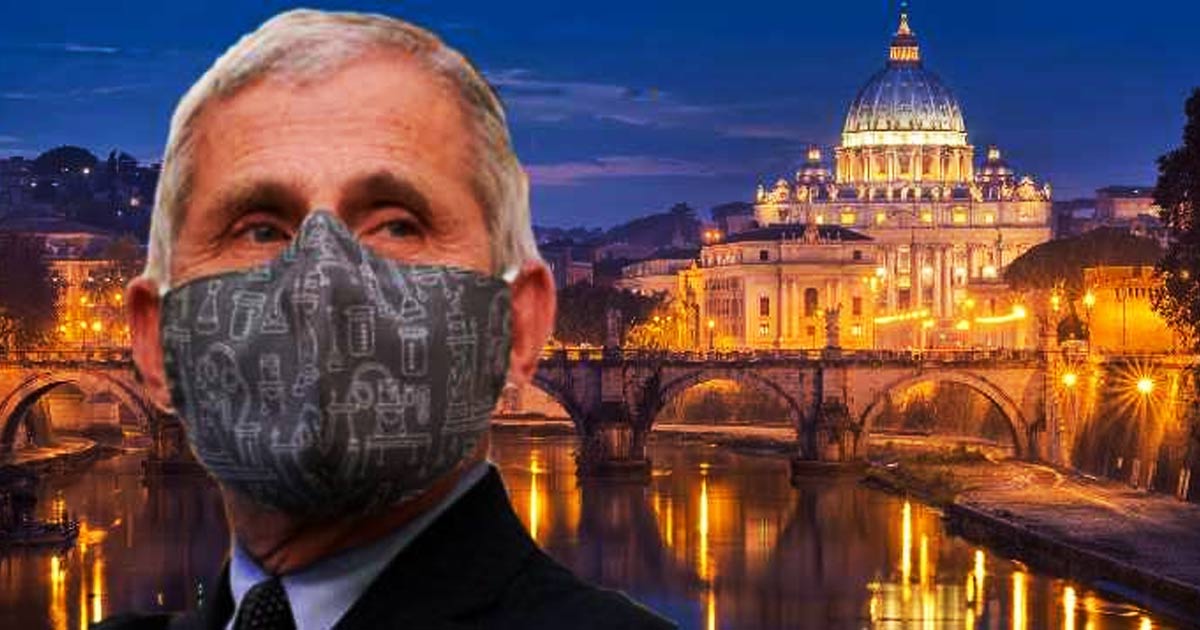 The devil—who not only truly exists—but is now the guiding hand behind Democrats working to destroy America’, sports horns and cloven hoof feet.

The first time Fauci turned up in public wearing a Beaker Mask was on January 21, 2021, when he announced that it was “liberating” that he could now ‘let the science speak’ as Covid advisor to President Joe Biden.

A spun fairytale turned nightmare in the making

“As Biden spoke, Fauci stood behind him, wearing a face mask patterned with beakers, Bunsen burners, and other scientific equipment.” (USA Today, Jan. 22, 2021)

A spun fairytale turned nightmare in the making, proving for the first time in the propagandized World of Science all you have to do to claim Science expertise is to wear a face mask emblazoned with—BEAKERS.

Count on Fauci wearing his beaker mask on May 6 at the Vatican’s shameful ‘Health Conference’,  which is giving Frankenstein Fauci the prime speaking spot on an event touted as “Exploring the Mind, Body & Soul. How Innovation and Novel Delivery Systems Improve Human Health”.

Canada Free Press calls it a gathering of the ‘Anti-God Squad’, suggesting that now that the wicked have control of your body through face masks and social distancing, they’re coming after your soul.

Steve Bannon’s Rumble video guest, Liz Yore, founder of Yore Children, does a great job in detailing all the usual suspects (not just Fauci and Chelsea Clinton) who will be among the Anti-God Squad’s “Health” conference.

COVID, not Christianity, is now the most prominent go-to Religion

COVID, not Christianity, is now the most prominent go-to Religion.

This is the trajectory of how Fauci became the world’s most prominent Covid-19 scientist:

“Fauci already had a strong relationship with Ron Klain, Biden’s chief of staff. The two worked closely together on the 2014 Ebola outbreak. (Klain keeps a framed certificate of appreciation from Fauci on the red walls of his home office just outside Washington, D.C.)

“Fauci, who has served as the director of the National Institute of Allergy and Infectious Diseases since 1984, has also already strengthened his ties with the head of the World Health Organization, whom he referred to Thursday as “my dear friend.”

“WHO Director-General Tedros Adhanom Ghebreyesus tweeted his thanks to “my brother Tony for leading the U.S. team.”

“Fauci led off his comments to reporters Thursday by warning that “we are still in a very serious situation.”

“He said hospitalizations and deaths might go up even as cases are going down. He talked about the challenges of the new strains of virus and the need for more vaccination outreach, particular to skeptical communities. When asked why some states say they need more vaccines while the Centers for Disease Control and Prevention contend they still have some, Fauci said he doesn’t know but wants to find out.

“One of the new things in this administration, is if you don’t know the answer, don’t guess,” he said in response to another question.

“Above all, our plan is to restore public trust,” President Joe Biden said Thursday, when laying out from the State Dining room a national plan to tackle the virus. “That’s why you’re going to be hearing a lot more from Dr. Fauci, not from the president, but from the real genuine experts and scientists.”

“As Biden spoke, Fauci stood behind him, wearing a face mask patterned with beakers, Bunsen burners and other scientific equipment.

“A séance to one world religion.”

“Fauci tried to remain diplomatic. But he admitted to becoming “really ticked off” by a Trump campaign ad that took one of his statements out of context, implying that he had praised Trump’s handling of the pandemic.

“During an October campaign rally, Trump criticized Biden for wanting “to listen to Dr. Fauci.”

Now the Vatican, through its Pontifical Council for Culture, the Cura Foundation, the Science and Faith Foundation (TTOQ), and Stem For Life (SFLF) is bringing Fauci to the world stage as Mother Earth’s biggest scientist.

As Liz Yore says the Vatican’s upcoming “mind, body and soul” conference should be exposed for what it truly is: “a séance to one world religion.

Meanwhile,  the Pontifical Council for Culture, the Cura Foundation, the Science and Faith Foundation (STOQ), and Stem For Life (SFLF) hosting the Vatican’s May 6-8 “Health” Conference can truly say: “The devil is making us do it”.

The Little-Known Sordid History Of Psychiatry

How To Protect Yourself From Long Term Pandemic Lockdown