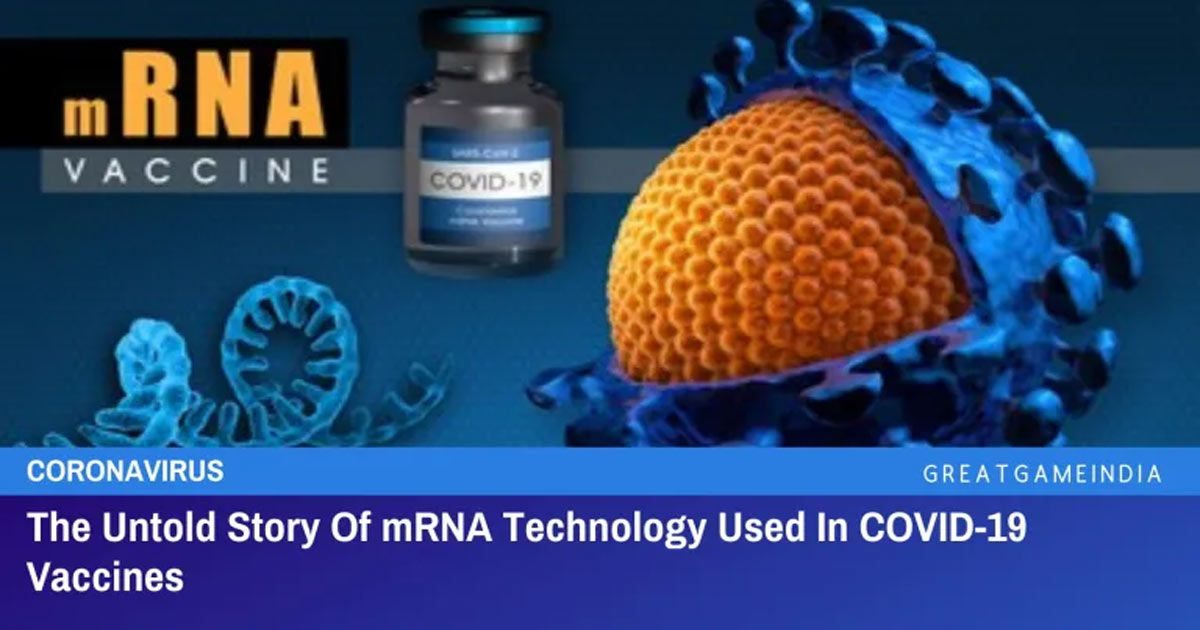 Without Ian MacLachlan’s innovative delivery system, Moderna and Pfizer couldn’t safely get their mRNA vaccines into your cells. So why does hardly anyone acknowledge the Canadian biochemist’s seminal contributions—or pay a dime in royalties? This is the untold story of mRNA technology used in COVID-19 vaccines and how its inventor is canceled by Big Pharma.

As the mRNA technology used in the current Pfizer, BioNTech, and Moderna emergency use (EUA) experimental “vaccines” makes its way into arms around the world, little has been reported about how the messenger RNA technology—whose purpose is to instruct the immune system to fight COVID-19—was developed.

For the product to get “safely into human cells,” the mRNA needs to be encapsulated in fragments of fat called lipids. As Pfizer CEO Albert Bourla disclosed to Forbes:

“The whole mRNA platform is not how to build an mRNA molecule; that’s the easy thing. It is how to make sure the mRNA molecule will go into your cells and give the instructions.”

According to pharma giant Moderna, the COVID-19 mRNA-based experimental vaccines being approved for emergency use for the first time in history are Operating Systems designed to program human DNA.

As per a video leaked by an insider from Facebook, Mark Zuckerberg himself admitted that COVID-19 vaccines will change your DNA and that he is not sure what would be the long-term effects of these vaccines.

Developing vaccines against COVID-19 is a hugely profitable endeavor for pharmaceutical companies. In fact, for years to come, Pfizer, BioNTech, and Moderna are expected to receive billions of dollars from COVID-19 booster shots alone, in a $35 billion vaccine market.

The same three companies are projected to sell $45 billion worth of vaccines in 2021.

But exactly how did Moderna and Pfizer develop the technology to get their mRNA drugs into human cells once their jab enters the body?

According to the co-founder of BioNTech Dr. Ugur Sahin, the COVID-19 vaccine he designed for Pfizer was designed in just a few hours in a single day on January 25, 2020.

No other vaccine in history has been created and manufactured so quickly. Previously, the fastest vaccine ever developed took more than four years.

However, this is far from the truth. The simple answer is — neither Pfizer nor Moderna or BioNTech designed the mRNA technology-based vaccines.

A months-long investigation by Forbes exposes “a complicated saga involving 15 years of legal battles and accusations of betrayal and deceit.” The probe explains:

“What is clear is that when humanity needed a way to deliver mRNA to human cells to arrest the pandemic, there was only one reliable method available—and it wasn’t one originated in-house by Pfizer, Moderna, BioNTech, or any of the other major vaccine companies.”

According to Forbes, the scientist most responsible for the crucial mRNA delivery method for COVID vaccines is Ian MacLachlan—a 57-year-old biochemist from Canada.

Despite not currently being recognized or compensated by the giant pharmaceutical companies, while in this role, he commanded the team that developed the crucial technology now being used in their mRNA vaccines.

MacLachlan became the chief scientific officer at Protiva in 2000. He recruited longtime U.S. biotech executive Mark Murray to be CEO. Soon after, two Protiva chemists made a crucial discovery that led to a new mixing method. As explained by Forbes:

They put lipids dissolved in ethanol on one side of a physical T-connector apparatus, and, on the opposite side, genetic material dissolved in saltwater, then shot streams of the two solutions at each other. It was the moment they had been hoping for.

The collision resulted in lipids forming a dense nanoparticle that instantly encapsulated the genetic material. The method was elegantly simple, and it worked.

While similar to lipids used by others (Inex) in experiments, MacLachlan’s LNP had “a dense core that differed significantly from the sac-like liposome bubbles developed by Inex. MacLachlan’s team had figured out the specific ratios of the four kinds of lipids that worked best relative to one another. Everything was dutifully patented.”

In 2013, MacLachlan had a conversation with Stéphane Bancel—CEO of the upstart Moderna Therapeutics—about his innovative delivery system, which he had been working on for more than a decade.

A former colleague and rival of MacLachlan, Inex’s Thomas Madden (who was fired from Tekmira five years earlier), was also talking to Bancel at the time.

Forbes points out that “the rivalry between these two scientists is the root of the controversy over the delivery technology that today’s Covid-19 vaccines rely on.”

For their part, Moderna Therapeutics “vigorously disputes the idea that its mRNA vaccine uses MacLachlan’s delivery system.” The company maintains that for years it has used its own “proprietary delivery system.”

However, when testing its COVID-19 vaccine in mice, Moderna “used the same four kinds of lipids as MacLachlan’s technology, in identical ratios.” Forbes explains:

Moderna insists the preclinical formulation of the vaccine was not the same as the vaccine itself. Subsequent regulatory filings by Moderna show its vaccine uses the same four types of lipids as MacLachlan’s delivery system but with a proprietary version of one of the lipids and the ratios “slightly modified” in a still undisclosed manner.

Pfizer’s narrative is very much like Moderna’s. Still, FDA documents confirm “their vaccine uses the same four kinds of lipids in nearly the exact ratios that MacLachlan and his team patented years ago, albeit with one of those lipids being a new proprietary variation.”

The legal battles and extenuating circumstances between MacLachlan, Madden, and various others surrounding the mRNA technology being used in COVID-19 vaccines are explained in great detail in Forbes’ piece.

MacLachlan remarked, “I look at the news, and 50% of it is vaccines, it’s everywhere, and I have no doubt the vaccines are using the technology we developed.”

MacLachlan is resolved to the reality that—out of the billions of dollars that will fall into big pharma’s pockets from mRNA COVID-19 vaccines—his name is canceled, and he will receive no monetary compensation for his contribution.

In the meantime, Moderna CEO Stéphane Bancel became a billionaire last April thanks to the vaccine. Nonetheless, MacLachlan states:

“I definitely feel I made a contribution. I have mixed feelings because of the way it’s being characterized, and I know the genesis of the technology.”

In addition, a confidentiality agreement shows potential coronavirus vaccine candidates were transferred from Moderna to the University of North Carolina in 2019, nineteen days prior to the official emergence of the Covid-19 pandemic.

German scientists have found out how the broken parts of mRNA vaccines mutate to trigger blood clots in recipients. Scientists say the vaccine is sent into the cell nucleus instead of surrounding fluid, where parts of it break off and create mutated versions of themselves. The mutated versions then enter the body and trigger the blood clots.

41.5K people died within 21 days of Covid Vaccination in England & a further 291K died within 6 months