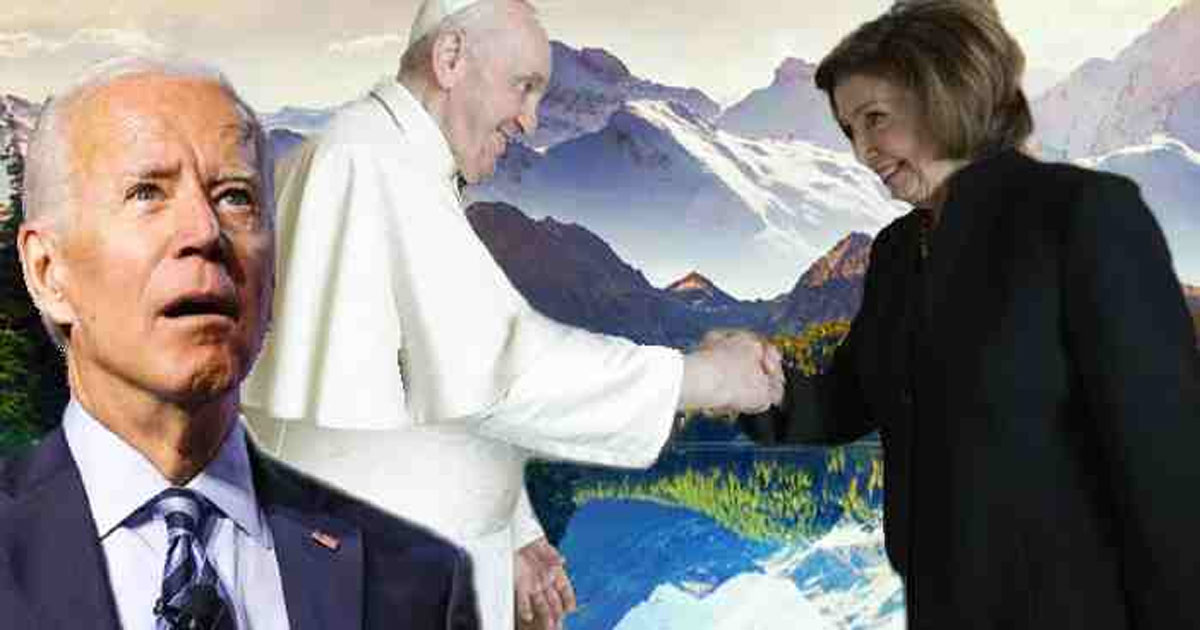 Make ready for the ‘Greatest Show on Earth’, the one for which demented and demonized Joe Biden will raise the curtain on what he and Dr. Anthony Fauci proudly predict as: “The Dark Winter”.

This deadly duo’s “Dark Winter” counts on a completely captive audience—millions of folk shivering in unheated homes, miserably bundled up in blankets having no money with which to pay mounting heating bills, left subject to scaremongering, courtesy of 24-7 media live streaming.

The Opening Act of the ‘Greatest Show on Earth’ kicked off at what used to be the Vatican where a clearly simpering, prime abortion advocate Nancy Pelosi was warmly welcomed by ‘Pope’ Francis.

Yes, that really was a Freemason handshake that the politician and pope exchanged.

Suppress your involuntary vomit instinct when watching this video:


Global Climate Crisis is prominent on the Biden, Pelosi, and papal agenda

Joe Biden’s turn with Francis will come on Oct. 29.  The Freemason handshake with the prelate, depending upon whether he remembers his handlers’ instructions.

Now that COVID, touted as a killer PANDEMIC is in visible death throes, the Global Climate Crisis is prominent on the Biden, Pelosi and papal agendas in a full-throttle, Sky-is-Falling Scare Mongering mode,  replacing the instilled fear of dying from the Pandemic.

All will meet up in what CFP Australian columnist Viv Forbes calls “November-cold Glasgow, Scotland”  for the United Nations Climate Change Conference of the Parties, or COP26, Nov. 1 to 2.

Real icicles will replace human ones soon after their Glasgow departure.

“The president is also sending nearly half of his Cabinet to COP26 in a U.S. delegation led by Special Presidential Envoy for Climate John Kerry.” (CNBC, Oct. 14, 2021)

None of them will have to depend on Southwest Airlines to get there.

“The journey will mark the second overseas trip of Biden’s presidency, and comes as he attempts to take action to address the threats of global climate change. It also signals his re-engagement with global allies in the wake of former President Donald Trump’s tumultuous relationships with other nations.” (CNBC)

Nothing—not even the 2020 presidential election campaign—could drag Biden out from hiding in his Delaware basement.

“The president is also sending nearly half of his Cabinet to COP26, including Secretary of State Antony Blinken and Treasury Secretary Janet Yellen, according to a White House official. The U.S. delegation will call on nations to reduce the greenhouse gas emissions required to “meet the demands of science” and limit global warming to 1.5 degrees Celsius. (CNBC)

“Special Presidential Envoy for Climate John Kerry will lead the delegation of senior Biden administration officials and remain in Glasgow for two weeks.

“Biden will first visit the Vatican City on Oct. 29 to meet with Pope Francis. They intend to discuss efforts to combat the climate crisis, Covid-19 pandemic and poverty, among other contentious global issues, the statement said. (CNBC)

“The leaders are expected to decide whether to approve an international tax plan developed in July by financial leaders from the Group of 20 large economies. The plan would establish a global minimum corporate tax of at least 15%, and would change the way companies such as Amazon and Alphabet’s Google are taxed.”

“The summit will see world leaders come together to discuss more ambitious climate action as U.N. researchers warn that global warming is dangerously close to spiraling out of control.  The U.N. released a damning report in August that delivered a stark warning on climate change. In the first installment of four reports released under the Intergovernmental Panel on Climate Change, researchers observed changes to climate that were projected to be “irreversible over hundreds to thousands of years.” (CNBC)

“The Biden administration has pledged to cut U.S. greenhouse gas emissions nearly in half by 2030 and achieve a net-zero economy by mid-century. The Obama administration had set a goal to cut emissions by up to 28% below 2005 levels by 2025, but Trump stopped federal efforts to meet that target.

“In May, the president also issued an executive order requiring the development of a governmentwide climate change risk strategy, and an annual assessment of climate-related financial risks in the U.S. budget.

“It’s all about the children”

“Democrats are trying to pass a bill that will encourage the adoption of green energy and the construction of climate-resilient buildings and infrastructure as part of the president’s economic plan. (CNBC)

“House Speaker Nancy Pelosi, however, suggested that Democrats will likely have to trim $1 trillion or more from their $3.5 million climate and social safety net proposal to push it through Congress amid squabbles between the party’s progressive and moderate wings.

“The other senior Biden administration officials attending COP26 are:

“Pelosi, a Catholic, said in a statement that it (meeting with Francis)  was “a spiritual, personal and official honor” to have an audience with the pope. (Catholic Philly, Oct. 11, 2021)

“His Holiness’ leadership is a source of joy and hope for Catholics and for all people, challenging each of us to be good stewards of God’s creation, to act on climate, to embrace the refugee, the immigrant and the poor and to recognize the dignity and divinity in everyone,” her statement said.

“In her keynote address to fellow legislators from around the world meeting in Rome Oct. 8, Pelosi said world governments must take bold action in their own countries and when they meet for COP26 in Glasgow, Scotland, in November.

“It would be a dereliction of duty for us not to go into the future in a green way and (one) that responds to the urgency of the climate crisis. It’s all about the children,” she said. “We will leave them a world where they can be healthy, where they can thrive and reach their fulfillment.”

All, that is, with the exception of innocent babies scraped from their mother’s wombs!

“In his speech to the parliamentarians Oct. 9, Pope Francis spoke of the “important, and indeed, crucial” role of governments in slowing climate change and restoring a healthy environment. (Catholic Philly)

“This demanding change of direction will require great wisdom, foresight and concern for the common good: in a word, the fundamental virtues of good politics,” he said. “As political leaders and legislators, you are responsible for influencing people’s actions by those means provided by the law, which lays down rules for admissible conduct in the light of the common good, and with respect for such other fundamental principles as the dignity of the human person, solidarity and subsidiarity.”

“Care for our common home naturally falls within the scope of these principles,” the pope said. “To be sure, it is not just a matter of discouraging and penalizing improper practices, but also, and above all, of concretely encouraging new paths to pursue, paths better suited to the objectives we seek to achieve. These are essential elements to be considered as we strive to meet the goals set out in the Paris Agreement and to contribute to the positive outcome of COP26.”

“…The challenge, he said, “is complex and demanding, but humanity has the means to effect this change, which calls for genuine conversion and a steadfast determination to meet it. This is especially incumbent upon those called to positions of great responsibility in the various sectors of society.”

The latest word from the Vatican is that the pontiff will not be present with friends Pelosi, Biden, Kerry, et al at COP26. (Catholic World Report)

But his message is the same as theirs: radically changing the Almighty’s Creation by replacing it with The Great Reset’s arrogant “Building Back Better”.

Only they would think that they REALLY COULD!