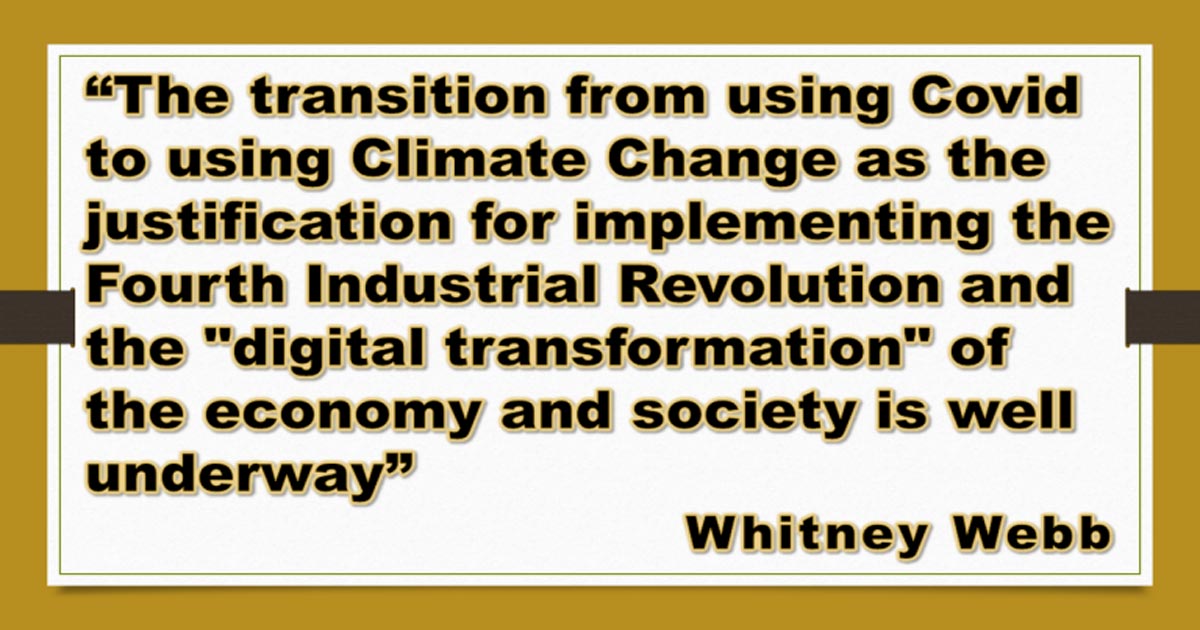 Whitney Webb is a writer and researcher for Unlimited Hangout and The Last American Vagabond.  She mostly covers intelligence, technology, surveillance, and civil liberties.  Webb made the comment regarding Covid and Climate Change on a tweet in a thread by Jesse Matchey.  Below is the first part of Matchey’s Twitter thread consisting of a series of short video clips.

Matchey begins his thread: “Even for the non-religious people out there, you can’t deny the merger of different faiths and the oddity of the pope teaming up with one of Epstein’s main co-conspirators (Lynn Rothschild).  Or Klaus Schwab’s praise of Hélder Câmara.”  The thread then continues with a series of videos without comment.

The following are the first 12 video clips from his thread. We have added bits of information to give some context where we felt it would be useful or interesting.

Schwab is the Founder and Executive Chairman of the World Economic Forum, as well as the founder of the Global Shapers Community and The Forum of Young Global Leaders.

Câmara is a Brazilian Catholic archbishop who was a Council Father at the Second Vatican Council and was known colloquially as “The Red Bishop” due to his condemnation of the anti-communist stance of the U.S. and his praise of Mao Tse-Tung during the Cultural Revolution, which claimed millions of lives.

Webb has documented an investigative series on Jeffrey Epstein, the billionaire pedophile and sex trafficker with a myriad of connections to the rich and powerful in the United States and several other countries, which you can read HERE.

And, there is Lady de Rothschild, previously Lynn Forester, who married into the Rothschild family in 2000.  She was introduced to Sir Evelyn de Rothschild at the 1998 Bilderberg Conference.  War criminal Henry Kissinger served as the couple’s “match-maker.”

Forester was a close associate of Epstein and both were members of an elite online community set up in 2004 called A Small World.  A Small World’s largest shareholder was Harvey Weinstein, the now-disgraced media mogul who was a business partner of Epstein.

At this juncture, as the Rothschild name has come up, it’s worth making a brief mention of the City of London (“The City”).  The City is not part of Greater London, the UK, or even Europe.  It is a sovereign state and is the world’s ultimate center of financial power and the wealthiest square mile on the planet.  It should never be forgotten that money is power and this power rests largely in The City.

E.C. Knuth, The Empire of “The City” (1945, p5), wrote: ”The colossal political and financial organization centered in this area [of London], known as “The City,” operates as a super-government of the world; and no incident occurs in any part of the world without its participation in some form,” and the Modern History Project surmises “The Rothschilds operate out of The City.”

This clip is taken from the launch of Schwab and Thierry Malleret’s book: “COVID-19: The Great Reset”

Actor and former California governor Arnold Schwarzenegger “urged” people to get vaccinated and wear masks in a video shared on his Instagram.

Source: Video. Nancy Pelosi Pushes Agenda 21, despite the fact that HAARP is the culprit for global warming

In 1992, just after Agenda 21’s introduction at the Earth Summit, Nancy Pelosi introduced a resolution of support for the plan into Congress.

The Earth Summit was held in Rio de Janeiro, Brazil, from 3-14 June 1992.  One of the major results of the Summit was Agenda 21.  From its inception Agenda, 21 was hailed as the “comprehensive blueprint for the reorganization of human society.”

Cyber Polygon 2020, which took place on 9 July 2021, was a simulation about a “cyber pandemic.”  Many are now taking note of these types of simulations because the world has experienced many simulations that came to fruition only a short time later.  For example, Event 201 – a simulation of how the world would react if a coronavirus pandemic swept across the planet – took place on 18 October 2019.  Coincidentally, many of the scenarios imagined during Event 201 (and reported on during fictional news broadcasts) became a reality in 2020.

Ted Turner is CNN’s Founder and a billionaire environmental extremist. Turner, a fan of China’s one-child policy – despite the brutality of forced abortion and sterilizations which are associated with it – proposed similar limits on family size for all.  In the wide-ranging hour-long interview with Charlie Rose on PBS in 2008, Turner said: “We’ve got to stabilize the population.  On a voluntary basis, everybody in the world’s got to pledge to themselves that one or two children are it.”

Elon Musk was given the Axel Springer Award for 2020.  “As one of the most creative entrepreneurs and most brilliant engineers of the digital age, Elon Musk inspires an entire generation. He combines great visions with the indomitable will to achieve them. With PayPal, SpaceX, and Tesla, Elon Musk has turned entire industries upside down, and his drive is irrepressible,” said Mathias Döpfner, CEO of Axel Springer SE.

In early May, the announcement that Bill and Melinda Gates would be divorcing after twenty-seven years of marriage shocked both those that praise and those that loathe the “philanthropic” power couple.

Less than a week after the initial announcement of the divorce, on May 7, the Daily Beast reported that Melinda Gates had allegedly been “deeply troubled” by Bill Gates’s relationship with child sex trafficker and intelligence asset Epstein.  The report suggested that Melinda was a major reason for her husband’s decision to distance himself from Epstein around 2014 because of her discomfort with Epstein after they both met him in 2013.

The video clip below was retweeted, with the comment, by Webb: “The transition from using Covid to using Climate Change as the justification for implementing the Fourth Industrial Revolution and the “digital transformation” of the economy and society is well underway.”

International Council of Nurses CEO, Howard Catton, addressed a WHO press conference on Climate Change ahead of COP26.  He called for investment in nursing and health care systems as an essential requirement to combat the effects of both Climate Change and Covid-19.

After the above 12 video clips, Matchey continues with his thread by posting a further 19 on various topics ending with the comment “I planned on adding a few more but got distracted…”

Although these video clips may seem unrelated, they are like pieces of one puzzle, one story – the unfolding story of Agenda 21.  For the sake of preserving these little snapshots, these threads in the tapestry – and before Twitter decides to make his “account no longer available” – perhaps it may be worthwhile publishing, thereby saving, more of Matchey’s collection of tweeted video clips in further articles.

Jacob Rothschild: “Equality” is the code for depopulation, dispossession, and enslavement