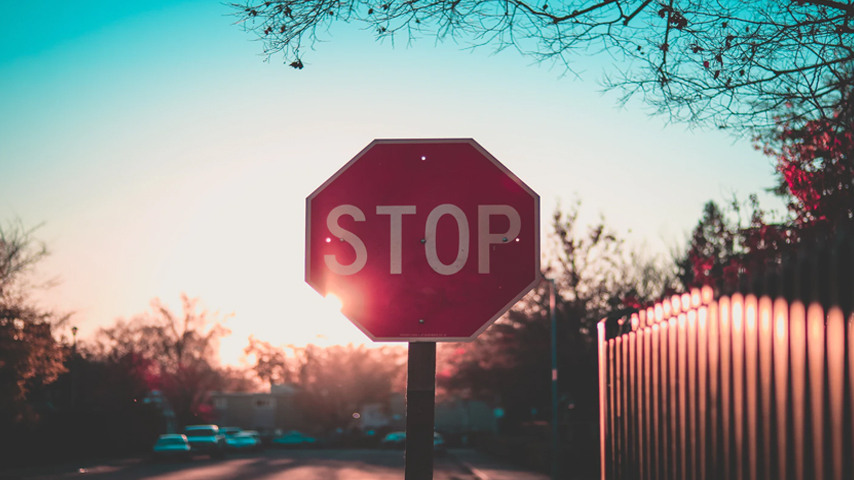 They’re right in front of us. All we have to do is pay attention.

Our life is governed by signs. You’re looking at signs from the minute you get up in the morning—an alert on your alarm clock or your smartphone—and you spend your day staring at computer screens, car navigation screens, billboards and building signage all day long.

Then there are the roadside signs. There’s a red one shaped like an octagon with four letters on it. What does it mean? Judging by how people in my world respond to it, it must mean “keep on rolling.”

What does that mean? Absolutely nothing to most people.

In the book of Matthew, Jesus coined a phrase that I’m sure you’ve heard before: “signs of the times.”

Then the Pharisees and Sadducees came, and testing Him asked that He would show them a sign from heaven. 2 He answered and said to them, “When it is evening you say, ‘It will be fair weather, for the sky is red’; 3 and in the morning, ‘It will be foul weather today, for the sky is red and threatening.’ Hypocrites! You know how to discern the face of the sky, but you cannot discern the signs of the times. 4 A wicked and adulterous generation seeks after a sign, and no sign shall be given to it except the sign of the prophet Jonah.” And He left them and departed.—Matthew 16:1-4

These two religious groups—the Pharisees and Sadducees—were united in their hatred for Jesus. They came to Him demanding a miracle. Of course, Jesus had been doing miracle after miracle already—healing the sick, casting out demons, calming storms on the Sea of Galilee, feeding thousands of people from a little boy’s lunch.

He had even raised Lazarus from the dead.

No matter how many miracles some people witness, they will never allow their hearts to believe.

Anyway, these Pharisees and Sadducees demanded that Jesus show them a “sign from heaven.” In Mark’s account of this story, we’re told that Jesus “sighed deeply.”

I imagine I would have sighed deeply, too.

Have you ever had someone say something to you that was so lame or off the wall that you couldn’t even come up with a reply? Maybe all you could do was sigh, shake your head, or shrug your shoulders and walk away. Maybe that’s how Jesus felt with these cold-hearted religious leaders.

It’s as though He was saying, Oh come on. Really? Are you serious? After all, I’ve done you’re saying this to Me? They were just playing games, after all. They didn’t want to believe it. He knew that.

So in essence, He replied by talking about the weather. “You guys do a great job at reading the weather signs, don’t you? You look up at the clouds before you turn in for the night and predict what kind of day you’re going to have tomorrow. But you can’t see what is so plainly obvious, right before your very eyes.”

These days, it’s not too difficult to figure out what tomorrow’s weather will be like. All I have to do is a glance at the little app on my iPhone. If there’s a little cartoon sun shining on my screen—par for the course here in Southern California—then we’ll enjoy great weather. If there’s a rain cloud, we may have a storm.

Jesus understands this. You can see when the clouds are forming or the weather’s about to change. You know what’s about to happen. It’s perfectly clear! Jesus is telling these religious leaders that they’re perfectly willing to look for the signs while pretending to be amateur meteorologists, but they refuse to pay attention to other signs right in front of their noses. They’re not asking the right questions.

The Signs are Clearer Than Ever

There are people today who seem totally oblivious to the signs of the times. If I saw a woman who was obviously in her ninth month of pregnancy, I could be a prophet and predict she would soon give birth to a baby. It’s easy, right?

The signs of the end times are just as clear. All I have to do is look around and see what’s right there in front of me:

I made that list quickly, so I’m sure I left off some major signs, too. But when you look at all these signs together, in a list, it becomes clear that this is a unique moment in history. This is why many Bible teachers believe ours will be the generation that will witness the return of Jesus Christ for His church.

When the Rapture occurs, there will be people who are left behind who will have been completely caught off guard. They didn’t expect it! They weren’t paying attention. They didn’t see the signs—even the ones right in front of their faces.

They can’t discern the signs of the times.

But you can. And you’ll be ready.