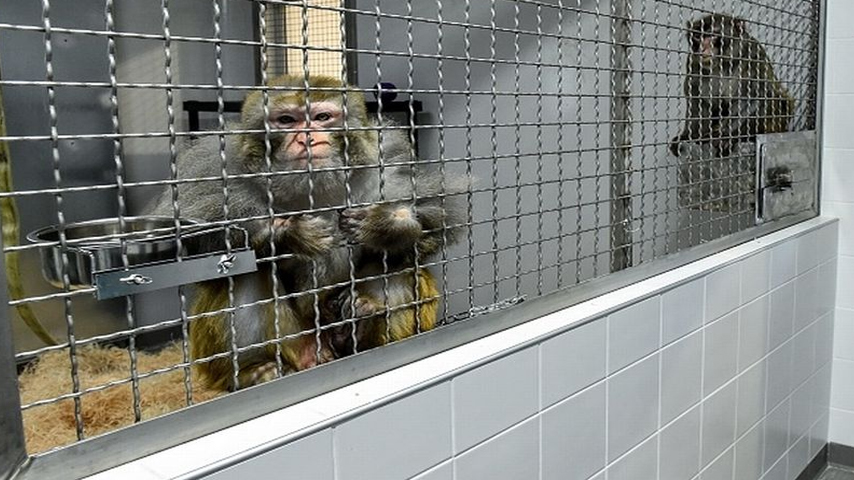 The monkey, spotted near the Kinabatangan River in Malaysian Borneo, appears to be a combination of two different species that are actually competing for forest space, a new study suggested.

However, a much stranger breeding project was attempted a century ago when a hybrid between humans and other animals was planned in a bid to supplement the armed forces and create a perfect “factory” for transplant organs.

In the 1920s Soviet scientists in Russia were ordered by dictator Joseph Stalin to create a hybrid ape-man “super soldier” capable of working under extreme conditions too dangerous for ordinary humans.

Secret documents from the time, declassified in the 1990s, show that Kremlin chiefs wanted an unbeatable army of man-apes with “immense strength but with an underdeveloped brain” that were “resilient and resistant to hunger”.

In 2019 a team of scientists led by Professor Juan Carlos Izpisua Belmonte from the US Salk Institute for Biological Studies reportedly created a human-monkey hybrid that survived for 19 days.

The 1920s project was led by Ilya Ivanovich Ivanov – a biologist whose life’s work centered around the cross-breeding of humans and apes using artificial insemination.

The project does not appear to have been successful but, in the 1970s, the emergence of an alleged “mutant” chimp with eerily human characteristics reawakened the “humanzee” idea.

Oliver, a performing ape that was reported to have been a human-chimpanzee hybrid, appeared to be much more intelligent than other chimps and had rather less body hair.

However, post-mortem testing showed that Oliver had the same genetic makeup as any normal chimpanzee.

In the 1980s, reports emerged of an experiment in human-chimpanzee crossbreeding conducted in the People’s Republic of China in 1967.

The Chinese government was said to be restarting the project and one of the scientists involved Dr. Ji Yongxiang told the Wen Hui Boa newspaper that he aimed to produce an animal that could speak while retaining the incredible strength of a chimpanzee.

He said that the hybrid “humanzees” would be used for mining, heavy agricultural work, an exploration of dangerous environments such as outer space and the depths of the ocean.

As yet, there are no authenticated cases of genetically-engineered ape-men being successfully produced, and so, the Borneo ape will remain the fascination of scientists in this field.

Researchers concluded that the monkey is likely the offspring of two distantly related species that share the same habitat; a proboscis monkey (Nasalis larvatus) and a silvery langur (Trachypithecus cristatus).