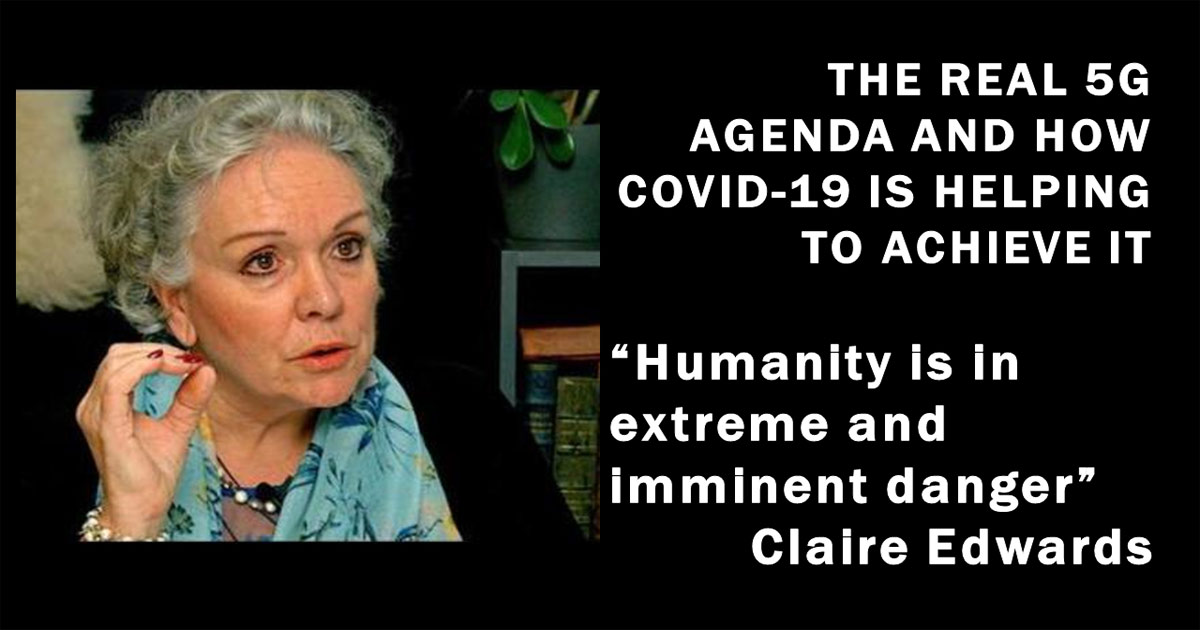 There has always been a lingering question as to why 5G is being hyped up as the panacea for all things with communications and especially the Internet of Things.  In October 2020 Claire Edwards issued a statement to the people of the world warning that wireless technologies suppress the immune system, of the many purposes of 5G technology, how 5G is implicated in Covid-19, and that Covid-19 is genocide.

To give some background information we use some points Edwards discussed ten months prior in an interview with Greenplanet FM: ‘Claire Edwards: What Is The Real 5G Agenda And Why The Frantic Hurry To Deploy It?’

Edwards, an editor on drugs, crime, and anti-terrorism, had worked at the United Nations (“UN”), Austria, for 18 years.  She especially worked on documents regarding space and worked on the UN Committee on the Peaceful Uses of Outer Space which has a legal subcommittee and a scientific and technical subcommittee.  Edwards has a good understanding of Space Law as well as some of the issues regarding space.

What brought Edwards to an in-depth understanding of 5G and its effect on human health is when, in December 2015, the UN installed Wi-Fi and cell phone boosters along with the ceilings in “public access areas.” She decided to take some readings using her radiation meter.  She discovered that in areas where the ceilings were lower, in the corridors where most of the staff worked, the radiation exposure was “off the scale.”

The IoE with four pillars – people, process, data, and things – builds on top of the Internet of Things (“IoT”) with one pillar – things. With IoE, if something can be connected it will be connected – hundreds of billions of microchips connected in products from pill bottles to plant water, requiring massive deployment of small cells.  Small cells, which may not be all that small size-wise, are low-cost radio access points delivering coverage indoors and out.  In the 5G era, small cells will be deployed in a far wider range of scenarios.

“Putting tens of millions of 5G antennae without a single biological test of safety has to be about the stupidest idea anyone has had in the history of the world,” said Martin Pall, Professor Emeritus of Biochemistry and Medical Sciences at Washington State University.

According to the World Economic Forum, “robotics, the IoT and artificial intelligence is known as the Fourth Industrial Revolution – and COVID-19 has accelerated the use of these technologies.”

Edwards claims there have been over 28,000 studies of the effects of 5G but regulatory agencies have been co-opted by corporations and so the public is not made aware of these studies, the information is being suppressed.

In 1976 there was a document emanating from the US military stating that it’s not desirable to have adequate public exposure limits because this would impede the development of weapons and also impede the profit of industry.

For proof that these studies exist, we need only look at what is published about microwaves.  For example, Edwards said, in the 1970/80 the United States military compiled a whole series of compendia of the body’s biological effects from microwave radiation; and, in 1973 the World Health Organisation held a symposium: Biological Effects and Health Hazards of Microwave Radiation.

Why would militaries want to develop microwave radiation weapons?  In order to kill.  And, it is not only the United States military that has microwave weapons.  An internet search will reveal that these weapons are now being regularly reported on, even by corporate media, whether as the cause of Havana Syndrome or questioning if the police will also use microwave weapons.

5G is to going to supersede 3G and 4G but we are going to be exposed to all of them at the same time as 3G and 4G will continue to be used.

You can listen to Edwards’ full one-hour January 2020 interview with Greenplanet FM HERE.

In October 2020, Edwards issued an important video message for the sovereign peoples of this world: ‘The Covid-19 Genocide of 2020’.  Now, a year after she issued her message, a lot more information is known and it is worth revisiting it as it seems more relevant than ever.

“5G is implicated in COVID-19 through correlations between the locations of the 5G rollout and morbidity/mortality, as well as the prior administration of flu vaccinations in Wuhan and Milan.

“Extensive military research over many decades was kept secret and regulatory agencies were co-opted in order to prevent the public from learning about the extreme dangers of electromagnetic radiation.

“Doctors receive no training on the risks to the health of exposure to EMR and therefore misdiagnose EMR symptoms. Hospitals are extensively equipped with 5G, putting patients’ lives at risk …

“… Humanity is in extreme and imminent danger,” Edwards warned.

The transcript for ‘The Covid-19 Genocide Of 2020’ and links to supporting documents are in the PDF below: