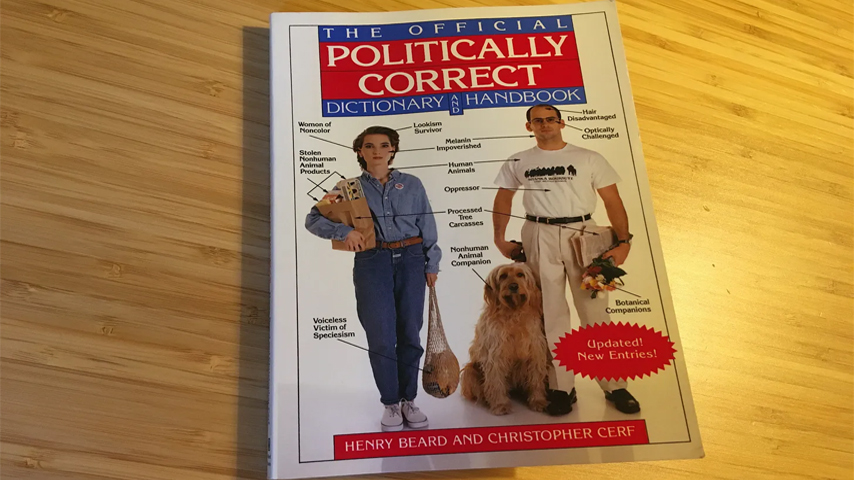 A forgotten satirical book from the nineties predicted cancel culture

At a church book sale in my Toronto neighborhood, I found The Official Politically Correct Dictionary and Handbook, a bestseller by Henry Beard and Christopher Cerf first published 30 years ago. I always gravitate to books like this—first to see whether there is anything new in this world, and then to remind myself that the overly simplistic answer is no. (See also the 1995 compendium Debating Sexual Correctness. The #MeToo discourse existed prior to #MeToo.) It seems we’re living through a kind of 1990s revival—fueled, I suspect, by nostalgia for pre-Covid, pre-9/11, pre-internet times. Or maybe just by teenagers’ timeless desire to dress the way everyone did decades ago.

The front cover of the dictionary shows a man, a woman, and a dog, each affixed with labels such as “hair disadvantaged” (he’s balding), “woman of noncolor” (she’s white), and “nonhuman animal companion” (it’s a shaggy dog). None of them, though especially the woman and the dog, would be out of place in a 2022 farmers market. (Again: cyclical fashions.)

The back cover bears a warning: “Be sensitive or else!,” with the follow-up, “Welcome to the nineties. But you better watch what you say. If you’re not politically correct, not even your pet—oops, your animal companion­—will love you anymore.” Beard’s author bio begins, “Although Henry Beard is a typical product of elitist educational institutions and a beneficiary of a number of negative action programs, he has struggled to overcome his many severe privileges.” And Cerf’s: “Christopher Cerf is a melanin-impoverished, temporarily abled, straight, half-Anglo-, half-Jewish-American male.” Privilege disclaimers in the early 1990s! I had to have it.

A compare-and-contrast of 1990s PC and contemporary so-called wokeness could fill volumes, so I’m mostly restricting myself to a too-close read of this one book. I’m asking only a few questions: What do the differences between the two phenomena indicate about the specificity of each moment? Did PC have the same place in the culture as wokeness later would?

And to the fact of the book itself: Could something like this exist today—that is, a light-hearted poke at left-wing pieties? The existence of The Babylon Bee Guide to Wokeness suggests yes, but humor does not exactly define the anti-wokeness crowd. Instead, the backlash is a mix of earnestly concerned liberals who think the left is shooting itself in the foot (Hi!) and conservatives delighted that the left is shooting itself in the foot. Humorlessness dominates today—perhaps due to increased polarization or a sense that the stakes are too high to joke around. Those who have taken on wokeness with humor, from comedian Dave Chappelle to evolutionary biologist Colin Wright, have faced protests, social media bans, and even physical attacks. Woke and anti-woke alike gravitate toward dead seriousness.

By contrast, the legacy of political correctness is the mockery it inspired. PC had its heyday as fodder for parodies in the 1990s, when I was in elementary school. Politically Incorrect with Bill Maher launched in 1993. The following year saw the appearance of Politically Correct Bedtime Stories, fairy tales updated satirically to reflect then-contemporary mores. There was also PCU, a campus comedy starring Jeremy Piven and David Spade that featured a scene in which meat was thrown at protesting vegans. South Park, which skewered both political correctness and conservative censoriousness, first appeared in 1997.

That, then, is the context for the PC Dictionary. It was very nineties to find it all hilarious and absurd. When I began reading the book, I had certain assumptions about what would seem different or dated. My initial hunch was that nineties PC was more about manners—how to speak politely of people of different races, sizes, and so forth—and as such, didn’t frighten anyone. But that’s not quite right. After all, in those years people talked about the PC police or the thought police. The book includes references to sexual harassment lawsuits and anxious jokes about being subjected to them. And the term “political correctness” is itself originally a reference to totalitarian speech restrictions.

While the specific term cancel culture wasn’t used, the concept existed and was indeed driving cultural concerns. The book opens with an account of an environmental studies professor having a “formal sexual-harassment charge” filed by some students after he’d made a risqué joke in class. The dread, and the reality, that an encounter with PC could wreck your life was around in the nineties. But there was also a general sense that once the kids got into the real world, they would drop a lot of their PC nonsense. That couldn’t be more different from today, when corporations and other institutions tout their adherence to the orthodoxies of Diversity, Equity, and Inclusion.

As best I can tell, PC wasn’t a force dividing society, Dreyfus Affair-style, the way one’s stance on wokeness can be. The general reality conveyed by the book is that certain liberals, on college campuses or in progressive neighborhoods, believed that PC was a force for good and mockery was not welcome. Others, equally liberal, were comfortable laughing at PC excesses. It wasn’t impossible that someone could get in trouble for saying the non-PC thing. But people were not fearful, as many are today, that every utterance was being policed.

The PC Dictionary highlights the fact that while the exact terminology may differ, many of the concerns of that era overlap with ours. Apparently, “writing about communities of which one is not a member” was frowned upon—a transgression that would see one accused of “cultural appropriation” today. There were gender-neutral pronouns, but it’s “tey” and “tem” rather than “they/them.” “Sex worker” was preferred over “prostitute,” “houseless” over “homeless,” “enslaved person” over “slave.” “Swapping sex partners” was to be called “consensual non-monogamy.” “Person-first” language (a person with a condition, etc.) comes up quite a bit. (“Person of differing sobriety” in lieu of “a drunk,” or my favorite: “persons with difficult-to-meet needs”—serial killers, for example.) Considering this was all before social media, the sheer Tumblr-ness of it all is striking.

As for differences? There’s a lot more about animals than one sees these days: veganism, but also speciesism and pet ownership. And though gender neutrality comes up frequently, and intersexuality occasionally, the entire concept of transgender or non-binary identities never appears.

There are parts of the book in which the authors mockingly point out PC terms that are simply part of today’s language: “chair” rather than “chairman,” or “personal assistant” replacing “secretary.” I wonder where the debate over “pregnant people” vs. “pregnant women” will end up in 30 years.

While some things in The Official Politically Correct Dictionary and Handbook feel dated, much of it could be written in 2022. There are the defenses of free speech, for example, including a long glossary item: “freedom of speech and the First Amendment,” which recounts “an official ban on inappropriately directed laughter” at the University of Connecticut. Beard and Cerf take aim at the censorious policing of language, writing that PC’s fixation on this betrays the movement’s essence of style over substance. The authors deride the self-satisfaction of the proponents of PC in the following passage:

It’s easy to see why so many reformers have forsworn a unified assault on such distracting side issues as guaranteeing equal pay for equal work; eliminating unemployment, poverty, and homelessness; counteracting the inordinate influence of moneyed interests on the electoral system; and improving the dismal state of American education, all in order to devote their energies to correcting the fundamental inequities described in these pages.

My final verdict? PC is wokeness. Wokeness is PC. And per the cover models, normcore is forever.