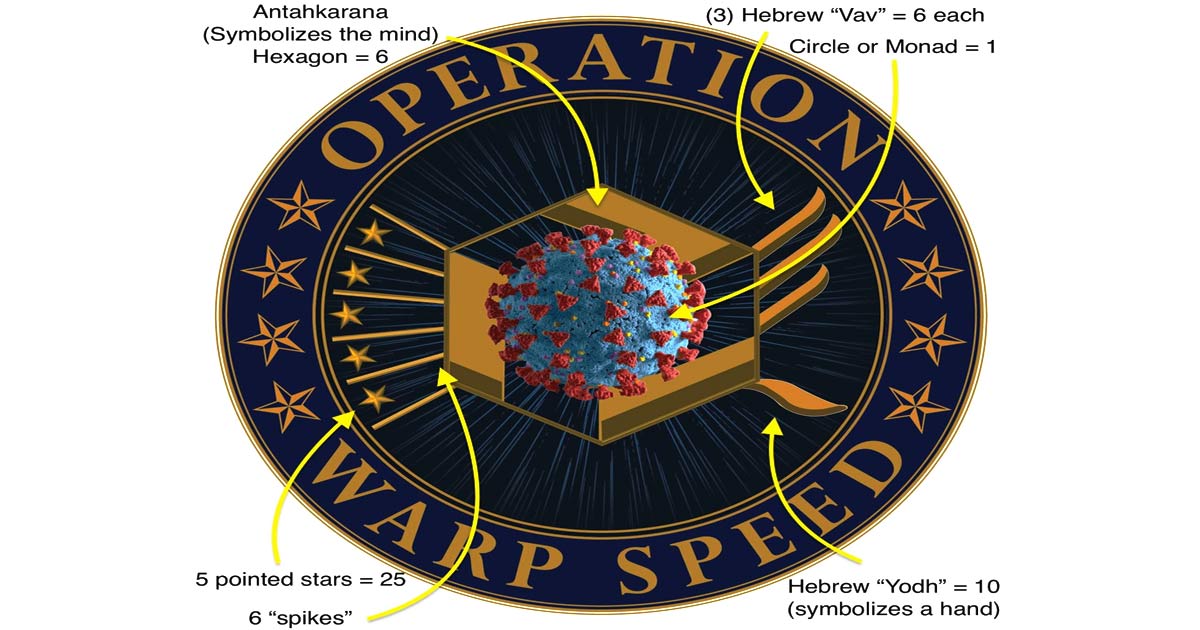 “We have a clearly occult logo for a national vaccine campaign and evidence that the very protein being expressed by the vaccine’s mRNA transcript is involved in compromising the blood-brain barrier.”

‘Signs and Symbols rule the World, not Words nor Laws.’ -Confucius

“The purpose of this study is to consider the Occultic Logo of the Operation Warp Speed that the former U.S. President Trump rolled out to fast-track the acquisition of ‘vaccines’ for COVID-19. Since the official announcement was made in May of 2020, many that study and/or are familiar with the Esoteric and Occult Symbols and Numbers immediately recognized the Hidden Symbology of the Occultic Logo used for this Military Operation, the Antahkarana. The question was rightly posed as to what such a Religious Symbol is doing on such an endeavor and what does it mean or does it really have hidden nefarious cryptic significance? The answer is yes.”  (From another article that dives even deeper.)

As others have pointed out, the hexagon behind the high-definition virus image contains an Antahkarana symbol. In the Hindi system, the Antahkarana essentially symbolizes the mind and by extension, the brain.

In the manufactured occult system of Theosophy, it is considered a bridge between the lower and higher manas. Whatever that means. One theosophist teaching is that the pituitary gland is connected to the Antahkarana. The gland is part of the brain but sits outside of the blood-brain barrier.

The logo seems to indicate that the brain is central to the purpose of this military operation.

What are those other things around the Antahkarana then? We can’t just dismiss them since somebody clearly put thought into incorporating them. They’re not just going to pay somebody on fiver to create a random logo for an 18 billion dollar operation.

Starting on the right side of the symbol. The only conclusion I can come to is that they are three Hebrew “Vav” letters on the upper right and one Hebrew “Yodh” letter on the bottom right. Vav is equal to 6 so we get three sixes right there, i.e. the number of the Beast.

Yodh is equal to 10 which is not necessarily sinister. It does however represent a hand. It’s on the right side of the symbol so it might be considered a right hand. The hand where the Mark goes. If we add these numbers up we’re at 28.

The Antahkarana is contained within a hexagon so we’ll count that as 6.

There are 13 total stars.  These likely represent the 13 companies that got government contracts to produce Covid vaccines. Most appropriate for this site is that it’s the 13th chapter of Revelations that introduces the Mark of the Beast. 13 also represents the death of something (people? an era?) and a transformative change.

Only 5 of the 13 companies were preordained to produce approved vaccines whether or not they panned out. Those 5 stars are literally and figuratively within the inner circle. So there are 25 (5 stars X 5 points per star) if we focus on the inner circle where all the symbolism is.

Now we have 6 lines on the left that frame the stars and they’re connected to the hexagon. They appear to be “spikes” alluding to the spike protein which is what all the “vaccines” are meant to produce in your cells. They would presumably have the value of a Roman numeral “I” or 1. So there are another 6.

59+6 = 65. We just need 1 more to give it some flare so I’m taking the virus to represent a circle, or a monad, which represents unity i.e. 1. So 66. The Book of Revelations is the 66th book of the bible. There’s probably some elaborate occult meaning to the number but who cares?

The virus is covering the symbol which represents that the virus is serving as a cover for an occult agenda.

WHY THE SPIKES AND ANTAHKARANA?

Evil people may have recognized long ago that the spike protein is a tool for compromising the integrity of the blood-brain barrier in order to clear a path to the brain. Lipid nanoparticle payloads including siRNA, CRISPR transcripts, or quantum dots will have an easier time reaching targets in the brain as a consequence of a compromised blood-brain barrier.

The goal of this current round of inoculations could also be to create an autoimmune disease of the blood-brain barrier causing the body to perpetually attack its own endothelial cells resulting in a permanently compromised blood-brain barrier. This could be exploited over years of repeated “vaccine” campaigns under the pretense of a covid pandemic to deliver gene therapies and quantum dots to the brain.

We have a clearly occult logo for a national vaccine campaign and evidence that the very protein being expressed by the vaccine’s mRNA transcript is involved in compromising the blood-brain barrier.

We should at least consider that something sinister might be going on.

Big Pharma DYSTOPIA: We are all prisoners until there’s a coronavirus vaccine; then we will be cattle

Coronavirus and the curious death of Steve Jobs, October 5, 2011, 223-days after his 56th birthday