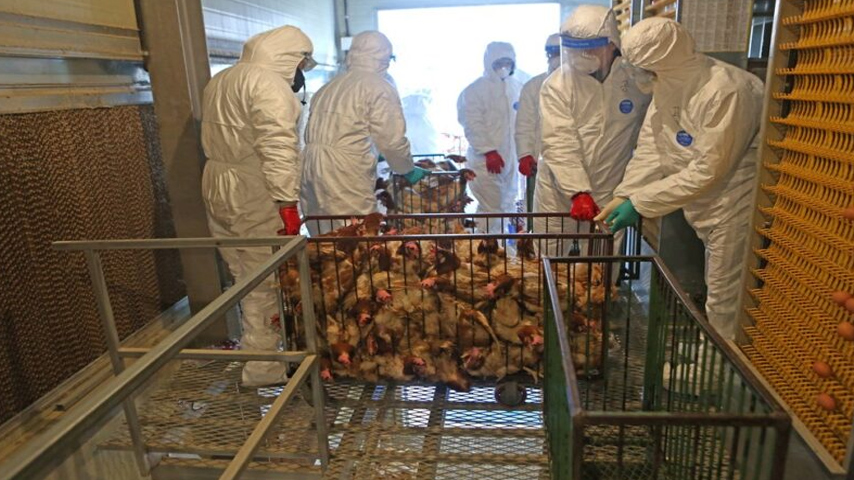 “Yeah, I think we have to recognize – I’ve always said that I think the Covid pandemic was a wake-up call. I don’t believe it’s a great pandemic. I believe the great pandemic is still in the future, and that’s going to be a bird flu pandemic for man. It’s gonna have significant mortality in the 10-50% range. It’s gonna be trouble.” – Robert Redfield — Former CDC Director, March 30th, 2022 interview with Doug McKelway on “Center Point”

Yes, the writing is on the wall, and in the U.S. testing ground that is the U.S created China, cases of ‘avian bird flu’ are already being reported by ‘news’ outlets. So far, as of a few days ago, 19 cases of H5N6 bird flu among Chinese citizens have been reported as confirmed this year. ‘Coincidentally,’ two new cases were reported just as Redfield’s statements were released.

Supposed ‘fears’ of a major outbreak are said to be advancing as the propaganda continues. As this plotted forewarning is being broadcast to the masses, the U.S. has been slaughtering chickens, turkeys, and other birds meant for food by the millions in Iowa and elsewhere; in addition to hundreds of millions being slaughtered worldwide, and this is no coincidence. These are planned tactics of fear-mongering and brainwashing the public.

Every announcement and every warning by the state is by design, as nothing is what it seems, and all are based upon the indoctrination and psychological manipulation of the public in advance, so as to lessen the risk of exposure to the state once any real weaponized ‘virus’ is released, or any fake pandemic scenario is announced.

Keep in mind that the comments made by Redfield, a lifelong ‘medical’ and political insider, are to be expected. Both his parents were scientists with the National Institutes of Health, (NIH) where he was a member of the President’s Advisory Council on ‘HIV/AIDS.’

Not surprisingly, he is a ‘virologist,’ acted as an advisor to the NIH for years, and also advised the Food and Drug Administration. He was appointed by the initiator of the ‘covid’ fraud in America, Donald Trump, to be the director of the abhorrent CDC, and was and is very close to the evil Fauci, and was a huge part of the deadly ‘covid’ response protocols. None of this should be surprising, because his “political club” ties to the ‘covid’ fraud and a fake pandemic are extreme and telling, and Redfield is smack in the middle of this deceit.

What is going on here is not just about another pandemic conspiracy, it is also part of the plot to vastly curtail the food supply, all in the guise of animal transmission of a human lab manufactured bioweapon called ‘avian flu.’

By targeting animals as a risk to spread flu to humans, the slaughter of domesticated and wild animals will gain more support from this ignorant population. The elimination of meat as a food source in favor of lab-grown GMO poison is now being pursued actively, as the regulation, control, and eradication of private farms and ranches is now underway.

This can eventually lead only to corporate farms in strict adherence to government and pharmaceutical guidelines meant to destroy the quality and quantity of our food supply.

Consider Redfield’s warning (threat) that 10% to 50% of humanity will die during the next government manufactured ‘pandemic.’ This number fits in exactly with Billy Boy and the Gates Foundation’s estimates due to his funding of the earlier gain of function research concerning the same bird flu now being forecast to kill possibly billions.

In fact, Redfield is stating emphatically that 800 million to 4 billion will die in the next fraudulent ‘pandemic; the “real” pandemic as he calls it. Any that do not grasp or understand the depopulation and eugenics agendas, should take notice of what is being openly projected and predicted in advance by the very purveyors of this scam.

It should be brutally obvious at this point that this is the beginning of the set-up of the American public to be prepared for and expect a bird flu pandemic. The real set up of course, is to condition the public to expect and accept tyranny and mass death.

The fact that these evil monsters are saying that this is going to happen, and not that there may be a possibility of new ‘viruses,’ is telling to say the very least. Even the framing of this so-called warning leaves only the indication that this is the definite next ‘threat’ to mankind, even though nothing of the sort has happened. How can they predict the exact future? Because they are perpetrating and purposely creating that future. This is what should be called the plan to commit criminal genocide.

Don’t turn your back, as the next emergency, the next pandemic, the next war, the next bio-weapon release, the next deadly poisonous experimental injection; in other words, any one of the next many false flags sitting in wait could appear overnight. There is no end to this until a majority of individuals decide to stop it.

“So we, we will have to prepare for the next one, (pandemic) that, you know, I would say, will get attention this time.” (Said with evil smiles and pride) – Bill and Melinda Gates said in an interview by U.S. Chamber of Commerce, June 23, 2020 (Quoted comment at 6:43)

The ‘covid’ fraud has not yet killed enough: Food shortages coming

Bird flu is the real pandemic – ‘C-19’ was just practice

The collapse of the food supply chain